Coronavirus Esme Fox Spain Is Open to Vaccinated Tourists. So, What Can You Expect This Summer?
Home  >  News   >   Adventure Travel Without the Adrenaline: Top 7 Trips for 2010

Adventure Travel Without the Adrenaline: Top 7 Trips for 2010

So you want an adventure, but you’d rather not take out a new life insurance policy. Never fear! From kayaking Puerto Rico’s bioluminescent lake to exploring Angkor Wat, here are our favorite adventure trips for 2010.

Does it take more than a piña colada to get you going? Does the thought of lying on the beach for a week bore you to tears? Luckily, Puerto Rico has more than enough outdoor activities to keep you occupied.

East of Esperanza, Bahía Mosquito (Mosquito Bay) is also known as Bioluminescent Bay or Phosphorescent Bay. It’s one of the world’s best spots to have a glow-in-the-dark experience with undersea dinoflagellates. Tour operators offer kayak trips or excursions on nonpolluting boats to see the bay’s tiny microorganisms, which appear to light up when the water around them is agitated. Dive into the bay and you’ll emerge covered in sparkling water. Look behind your boat, and you’ll see a twinkling wake. The bay is at its best when there’s little or no moonlight; rainy nights are beautiful, too, because the raindrops splashing in the water produce ricochet sparkles.

Any number of companies offer trips to Bahía Mosquito from nearby Esperanza, on the island of Vieques. You can fly there from San Juan or Fajardo. Most kayaking trips are in single-person kayaks, which can be a challenge if you don’t have experience or if you aren’t in the best shape. A better option for most people is a boat. Make sure it’s an electric-powered model, as the gas-powered ones are bad for the environment.

Vieques or Culebra for Snorkeling? by snorkelluvn 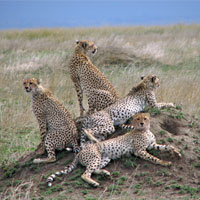 Tanzania is the quintessential, definitive Africa of your dreams. And who wouldn’t want to visit a place where the names of its legendary travel destinations roll of the tongue like an incantation: Zanzibar, Serengeti, Olduvai Gorge, Mt. Kilimanjaro, Lake Tanganyika, Lake Victoria, the Rift Valley, the Ngorongoro Crater, Olduvai Gorge, the Cradle of Humandkind.

Wherever you stay in this 5,791 square mile park, you’ll be looked after royally, with comfortable accommodations, good food, a dawn chorus of bubbling birdsong, and an evening serenade of whooping hyenas with a backing group of softly calling lions.

Most travelers arrive in Tanazania through Dar es Salaam airport. Many airlines, including KLM, British Airways, and Emirates, fly direct to Dar es Salaam from Europe, but there are no direct flights from the United States.

From Elvis in Vegas to Elephants in Tanzania by SandraJoy

The towering, dignified Himalayas, home to the planet’s highest peaks, stretch in a glorious snowy arc across 2,400 km (1,491 mi), and six countries from Pakistan to Bhutan. At their eastern end, where they begins to taper in width, the Himalayas slice right past the Indian district of Darjeeling and through the wee state of Sikkim, lending a wintery magnificence to their peaceful landscape.

A ride on the narrow-gauge Darjeeling Toy train (now a World Heritage site) is a must, providing a rare trip into the past. The engines run on coal, the carriages are narrow and tiny, and the tracks 1.5 feet apart. Spraying its passengers with particles of coal, the little train moves ahead unhurriedly in a cloud of smoke and steam, tooting loudly at vehicles and people that grudgingly heed way, and edging closely past homes and shops, fields and forests. The toy train leaves Darjeeling every day at 9:15, stopping at Ghoom after one hour and continuing to New Jalpaiguri.

Splendor apart, a trip into the eastern Himalayas requires planning and a bit of research. Navigating hilly roads are always tough and slow going. Journeys must start early and end early and routes worked out in advance. The the closest airport is at Bagdogra, a three hour drive from Darjeeling.

What’s the best time to go to the Himalayas? by SandyDennison

For millennia, the Nile was the trade route into the continent, and ancient Egyptians called Nubia the “corridor to Africa.” It is a barren land, rich in minerals, especially copper and gold, and its richness in ancient monuments attests to cultural links to Egypt from the earliest times. Cruising this area by boat is an exotic but stress-free way to go.

Most cruises start from either Aswan or Abu Simbel, and offer the opportunity to see countless temples, tombs, and monuments. The most famous things you’ll see are the temples of Ramesses II and his wife, Nefertari—hallmarks of the UNESCO-funded Nubian salvage operations—at Abu Simbel. One decided advantage to seeing Abu Simbel as part of a Lake Nasser cruise itinerary (as opposed to one on the Nile River) is that you will have the opportunity to visit the site before or after the tourist hordes depart and will see it at night, when it is illuminated during the nightly Sound & Light Show.

Aswan is linked to Cairo by several EgyptAir flights a day, as well as to Alexandria, Luxor, Abu Simbel, and Hurghada. There are no nonstop international flights that go directly to Aswan. Another easy way to reach Aswan from Cairo is via the overnight train operated by Abela, which has reasonably priced sleeping compartments.

A teacher + 41 students + 2 weeks in Egypt = lifetime memories, a trip report by teacherCanada 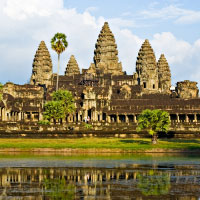 The temples of Angkor constitute one of the world’s great ancient sites and Southeast Asia’s most impressive archaeological treasure. The massive structures, surrounded by lush tropical forest, are comparable to Central America’s Mayan ruins—and far exceed them in size. Angkor Wat is the world’s largest religious structure; so large, it’s hard to describe its breadth to someone who hasn’t seen it. And that’s just one temple in a complex of hundreds.

You can see most of the significant temples and monuments in a one-day sprint, although a three-day visit is recommended. If you have just one day, stick to a 17-km (11-mi) route that takes in the south gate of Angkor Thom, Bayon, Baphuon, the Elephant Terrace and the Terrace of the Leper King, and Ta Prohm, ending with a visit to Angkor Wat itself in time to catch the sunset. Leave the most time for the Bayon and Angkor Wat.

The traditional way to hike in New Zealand is freedom walking. Freedom walkers carry their own provisions, sleeping bags, food, and cooking gear and sleep in basic huts. A more refined alternative—usually on more popular trails—is the guided walk, on which you trek with just a light day pack, guides do the cooking, and you sleep in heated lodges.

Starting northwest of Picton, the Queen Charlotte Track stretches 67 km (42 mi) south to north, playing hide-and-seek with the Marlborough Sounds along the way. Hike through lush native forests, stopping to swim or to pick up shells on the shore. Unlike other tracks, there are no Department of Conservation huts to stay in, just a few camping areas. Other accommodations are on the walk, however, from backpacking options to lodges, resorts, and homestays. Boats such as the Cougar Line can drop you at various places for one- to four-day walks (guided or unguided), or you can kayak or bike parts of it.

Make your way to the maritime township of Picton, which lies at the head of Queen Charlotte Sound and is the arrival point for ferries from the North Island, and a modest number of international cruise ships. It’s easy to arrange your trip from there with a little help from the Picton Visitor Information Centre.

16 Days All Over New Zealand, a trip report by indiancouple

Antarctica. The White Continent. The last frontier of adventure travel. While the trip all the way to Patagonia is no cakewalk, and very worthy of the trip, why not venture a bit farther south? Very few indeed can claim to have caught a glimpse of the land of eternal winter at the bottom of the world.

Most Antarctic cruises depart from Ushuaia, cross the Drake Passage, and spend about a week cruising the Antarctic peninsula. The cruising season runs from November through March. Early season is best for viewing icebergs, while whales and other marine wildlife are especially plentiful in February and March. Most ships incorporate landings via Zodiac at various points along the peninsula, but remember that as with everything in Antarctica, these excursions are totally weather dependent.

Fly to the Ushuaia port of embarkation from Buenos Aires or Santiago. If you’re using the Antarctica cruise as an extension of other travels in Southern Patagonia, several other towns offer flights, including Río Gallegos, El Calafate, and Punta Arenas.

Antarctica, the Falkland Islands, and South Georgia, a trip report by Chris_GA_Atl