An Insider’s Guide to Abu Dhabi

Looking for an exotic and glamorous getaway unlike any on earth? Follow in the stilettos of the Sex and the City gals and hop a flight to the over-the-top oasis of Abu Dhabi, in the United Arab Emirates. This is a land where falcons have passports, deserts have ice spas, and camels have beauty pageants (for real). From sunbathing on the Arabian Gulf to five-star camel treks in the Empty Quarter, and from shopping for Chanel in immaculate malls to sipping high tea next to sheiks and the Formula 1 race set, Abu Dhabi is a must-do for any glittering passport book. 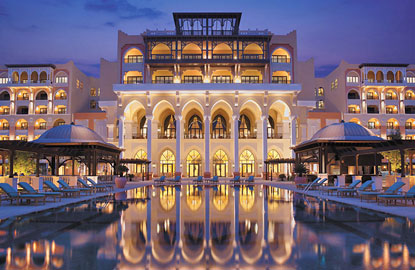 With high-end hotels springing up like desert roses across Abu Dhabi, it’s hard to pick a fave, but a few posh properties do steal the show. The just-opened St. Regis Saadiyat Island presides over the immaculate Gulf beach on this natural island, home to dolphins, sea turtles, and enormous outposts of the Louvre Abu Dhabi and a Frank Gehry-designed Guggenheim (both slated to open in the coming years). Each lavish room delivers a private balcony and divine stand-alone tub, with 30-percent discounts available for advance bookings (reduced rates from $362/night).

Or, say "salaam" to opulence at the Shangri-La, featuring Venetian-style canals (which connect the hotel to a local shopping souk) and a beachside pool so inviting you’ll think it’s a desert mirage (rates from $558/night). Don’t miss the romantic French cuisine at the hotel’s Bord Eau, recently named "Restaurant of the Year" by Time Out Abu Dhabi.

Yep, there’s a Time Out Abu Dhabi. And a La Perla lingerie store situated literally next door to the conservative My Fair Lady abaya (full-length woman’s robe) shop. That’s how this emirate rolls. Slip into a traditional abaya (thoughtfully—and insistently—provided free of charge at the front gate) for a tour of Abu Dhabi’s jewel, the Sheikh Zayed Grand Mosque. Grand is an understatement, with its Taj Mahal-esque white marble, one thousand flower-adorned columns, 80 domes crowned in gold, and the world’s largest handwoven carpet.

Next, put the (gold-plated) pedal to the metal with a driving lesson at Yas Marina Circuit racetrack, home to an annual Formula 1 Grand Prix, as well as to concerts from the likes of Beyoncé. Or, dash next door to Ferrari World and cling for dear life on the world’s fastest roller coaster. After a day on the fast track, slow down with a rejuvenating splash at playground-to-the-elite Monte Carlo Beach Club, the first of its kind outside of Monaco.

Fretting over where to take your injured pet falcon? The Abu Dhabi Falcon Hospital, of course! While it may seem an unlikely tourist stop, it’s a must in a country where the hunting birds are so beloved they get their own UAE passports and can be brought aboard commercial flights as carry-on luggage (one per economy ticket, two for those flocking in first class). During the hospital tour, visitors may hold falcons, observe talon surgeries, and even lunch near feathered friends in a bedouin-style air-conditioned tent. 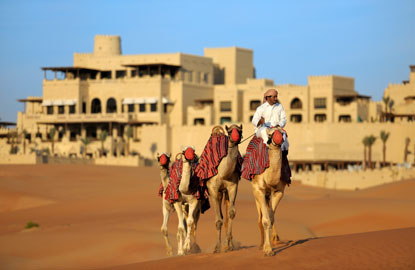 And no trip to Abu Dhabi would be complete without a weekend (or five) at the breathtaking Qasr al Sarab Resort, a jaw-dropping oasis set in the Empty Quarter—the world’s largest uninterrupted desert—near the border with Saudi Arabia. The hotel will send for you from Abu Dhabi or Dubai via private car or motor coach. Better yet, befriend a sultan with a helicopter to fly you in! Qasr’s bedouin-inspired luxury, romantically windswept isolation, and private plunge pools have lured sheiks, stars, and celebr-iticians. Explore its mystical moving sand dunes by sunset camel trek, sunrise desert hike, and with evening shisha (traditional water pipe) sessions under the stars. 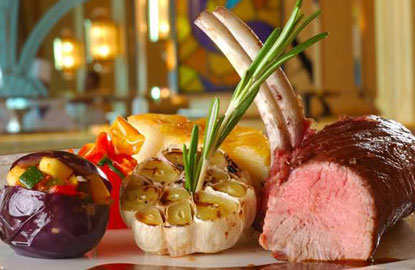 Sip high tea and indulge in finger sandwiches at the decadent Emirates Palace, which was once the most expensive hotel in the world. Then steal away for intimate Moroccan dining at the spicily appointed Agadir restaurant and lounge at The Westin Abu Dhabi Golf Resort & Spa.
For Lebanese dishes loved by locals, pop into the low-key Lebanese Flower (behind Electra and 26th Street) for quick bites. 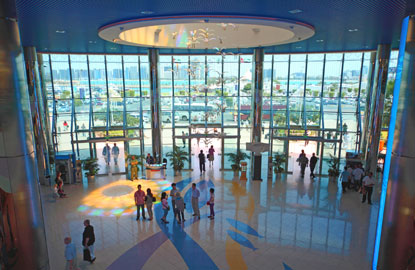 Bargain your way through Red Sea Antiques (Khalifa Street) for souvenir treasures like decorative lamps, tagine serving dishes, perfume bottles, and wooden carvings of Abu Dhabi’s famed door facades. Luxe shopping lovers, meanwhile, will adore the modern Abu Dhabi Mall and Marina Mall. For an authentic Arabian shopping experience, head to the Gold and Carpet Souks. Or, for the souvenir of a lifetime, bring home a four-legged friend with a savvy trade at the Camel Market! 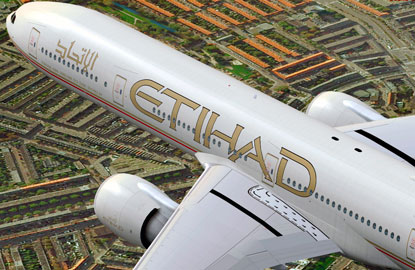 Getting to Abu Dhabi

Toss glamorous ensembles that cover knees and shoulders in a bag (more revealing tops, shorts, and bikinis are fine while inside resorts) and hop on one of Etihad Airways’ luxurious nonstop flights from New York (13 hours) or Chicago (14 hours) to Abu Dhabi International. Nonstop service is also available from London, while connecting service will launch from Washington, D.C. next year.

Thinking of a trip to the United Arab Emirates?

For up-to-the-minute hotel and restaurant recommendations, plus the best planning advice, check out our online United Arab Emirates Travel Guide.