Abercrombie & Kent to Cruise the Arctic in 2013 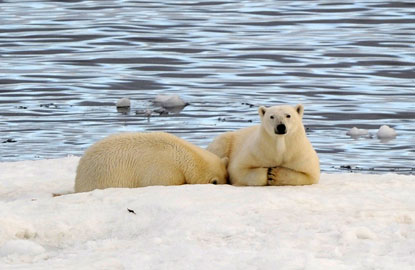 Abercrombie & Kent was one of the first expedition outfitters to marry the term "luxury" with "adventure travel." Over the years the company has continually created new and interesting itineraries, and recently added a new voyage to its 2013 roster called An Arctic Cruise Adventure: Polar Bear Country.

Changing weather conditions are opening up places that few visitors have ever seen in this region, and this itinerary will reach the ice edge where polar bears roam, just 600 miles from the North Pole. Passengers can took forward to picture-perfect sites like snow-capped mountains and crystal blue glaciers as well as up-close encounters with wildlife like polar bear, reindeer, musk oxen, walrus, seals, and a variety of birds, including puffins.

Only a handful of ships visit the Arctic each year and this voyage promises to be one of the most luxurious. (Silversea’s Silver Explorer also offers a five-star expedition in the area.)

Le Boréal is a 132-cabin mega-yacht outfitted with the most advanced stabilization system that helps it combat rough seas and provides a smooth sail for its guests. The ship has an ice rating exceeding what’s required in the Arctic and is also equipped with the latest navigation, communications, and safety equipment, including a satellite weather system that receives real-time images of weather and ice conditions. The ship offers a variety of stateroom configurations, including two-room, two-bath suites for families. All cabins feature a private balcony.

This 16-day Arctic itinerary includes pre-cruise lodging in Oslo, a charter flight to Longyearbyen, on-board lectures, twice-daily shore and Zodiac excursions, most drinks, and crew/staff gratuities. The per person, double occupancy rate is $11,995.