News Apeksha Bhateja Europe's Airports Are Chaos This Summer. And Now There's Another Problem
Home  >  News   >   Weekend at Downton Abbey: Our Insider’s Guide to Highclere Castle and Nearby Estates

Weekend at Downton Abbey: Our Insider’s Guide to Highclere Castle and Nearby Estates 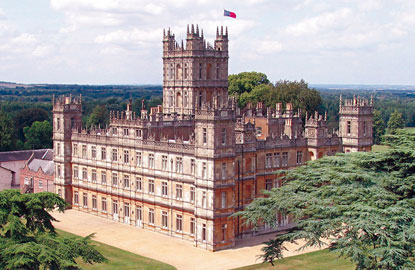 The incredible popularity of Masterpiece Classic’s Downton Abbey (season two is on now through late February) has put the spotlight on Highclere Castle, the imposing South of England manse that stands in for Lord and Lady Grantham’s sumptuous house. And if your visions of England include historic houses and landscaped gardens, the area around this impressive estate contains some of Britain’s grandest country seats. Located within easy reach of London, you can see them all on a stately weekend getaway of which even the Dowager Countess of Grantham would approve.

Exploring Highclere Castle and Nearby Estates

From royal palaces to literary havens, the area around Highclere Castle is full of grand estates.

With its self-confident Edwardian grandeur, Highclere Castle provides the perfect setting for Downton Abbey. Series writer Julian Fellowes knows the house’s owners, the Earl and Countess of Carnarvon, and had the house in mind when creating the series.

The commanding tower and pinnacles are the work of Sir Charles Barry, the architect of London’s Houses of Parliament; the third Earl of Carnarvon commissioned Barry to transform the family’s Georgian house into a stylish neo-Gothic manor in the 1830s.

Much of Downton Abbey’s furniture belongs to the Carnarvon family. "The furniture in the castle is left in place during the public opening, to much delight of the Downton fans as they really feel as if they are stepping through the doors of Downton Abbey," says Candice Bauval, personal assistant to the Countess of Carnarvon.

Visitors can walk up and down the spectacular staircases and see the state rooms, including the leather-walled saloon and massive library in which some of Downton Abbey‘s most memorable scenes are filmed (some bedrooms are also on view). To round out your experience, stroll the gardens and grounds, and stop at the tearoom to take it all in.

What you won’t see, however, are the locations used for the scenes of life downstairs; those were filmed at Ealing Studios in London. Instead, you can explore another part of the Carnarvon family’s legacy: the fifth Earl of Carnavon and Howard Carter discovered the famed Tutankhamun tomb in Egypt in 1922. The castle’s downstairs Egyptian Exhibit examines the earl’s backstory and interests.

Closest to London, the royal Hampton Court Palace gives you two for the price of one: the magnificent Tudor redbrick mansion that was begun in 1514 by Cardinal Wolsey to impress the young Henry VIII, and the larger 17th-century baroque offering, for which the graceful south wing was designed by Christopher Wren of St. Paul’s Cathedral fame. Highlights include the painting-filled state apartments and Haunted Gallery.

The world’s largest inhabited castle can be seen for miles, but the most impressive view is from the A332 road, coming in from the south. From William the Conqueror to Queen Victoria, the kings and queens of England added towers and wings to this brooding, imposing palace. But, despite the multiplicity of hands involved in its design, Windsor Castle manages to project a unity of style and character.

This Elizabethan mansion by the Thames served as the inspiration for Toad Hall in Kenneth Grahame’s Wind of the Willows. In summer, you can see the tall chimneys, mullioned windows, and battlements of Mapledurham House by river boat cruise.

Jane Austen wrote her best-selling novels, including Pride and Prejudice, Sense and Sensibility, and Emma, in an unassuming red-brick house 45 minutes southeast of Highclere. Now a museum, Jane Austen’s House retains the atmosphere of restricted gentility suitable to the unmarried daughter of a clergyman.

Where to Sleep Like a Lord of the Manor

England has plenty of B&Bs, inns, and comfortable chain hotels. But to sleep like Downton Abbey‘s Lord and Lady Grantham, three superb country-estate hotels are all within easy reach of Highclere.

If you’ve ever wondered what it would feel like to be an Edwardian grandee, splurge on a stay at Cliveden, the dignified home owned by the National Trust and leased as one of Britain’s grandest hotels. If the price is out of reach, you can also prebook afternoon tea and tour a few rooms and the grounds.

Don’t care for traditional décor but yearn for a country-house stay? Much imagination has transformed Coworth Park, an 18th-century mansion surrounded by 240 acres of parkland, into a playful, contemporary countryside hotel.

How to Get to Highclere Castle and Nearby Estates

Highclere Castle is close enough to London to make a day trip possible by public transportation; the closest train station is in Newbury, five miles away, and taxis await arrivals; National Express also runs a bus service from London to Newbury. Windsor Castle and Hampton Court Palace are also easily reached by train from London; check National Rail for the best train routes and times. That said, if you plan to see all of our recommended historic houses in one go, you’ll definitely need a car to get around. See the map.

Late spring and summer weekends are the best times to visit the historic houses near Highclere. Opening times tend to be limited (and can change), so be sure to check ahead of your visit. Highclere Castle, for example, is currently closed until Easter, then open only on limited days through June, and on Sunday through Thursday from July to mid-September.

Dig into Lady Almina and the Real Downton Abbey by the current Countess of Carnarvon. It tells the story of the fifth Countess who famously turned Highclere Castle into a hospital during World War I. Buy the book.

When to Watch Downton Abbey