News Tina Charisma 'Regenerative Travel' Is the New Buzz Phrase, but What Does It Mean?
Home  >  News   >   A Summer of Picasso

A Summer of Picasso

If you could attach yourself to the coattail of many art lovers traveling to France this summer, there is every chance you would find yourself ending up at a hidden 17th-century fortress set in the hills just east of Aix-en-Provence.

Famed as Pablo Picasso’s grandest home and hallowed as his final resting place, the Château de Vauvenargues is set to open its doors to the public for the first time ever, 35 years after his death. Under the welcoming auspices of Jacqueline Hutin (daughter of Jacqueline Roque, Picasso’s last wife and muse), the estate will receive visitors from May 27th to September 25th.

Can’t get enough? Two other Picasso events are going on around Provence this summer as well. First there’s the blockbuster Picasso-Cézanne, premiering this May at the Musée Granet in Aix. A second show is happening at the Musée Picasso, in nearby Antibes on the Riviera coast. With newly granted access to the grave of the father of 20th century art, art lovers everywhere are already making plans to pay their respects.

If you’ve ever dreamt of making a pilgrimage to Picasso Country, this is your year. 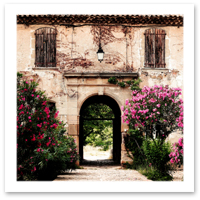 For some art devotees, no place on earth—not even Paris—is as historically important as Provence and the French Riviera, cradles to some of the biggest “isms” in 20th-century art. As Picasso was a one-man powerhouse of precisely just that, his spirit reigns supreme. Whether you hold him to be the premier genius of modernism or its Shrek—critics have noted that Picasso changed mistresses almost as frequently as he switched styles—he remains the unquestioned artistic fountainhead of the Riviera.

Zig-zagging up and down the coastline, travelers love to track him as he painted in Mougins, sculpted in Vallauris, wooed in Antibes, and seduced in Golfe-Juan. While for years tourists have been able to visit Picasso’s “War and Peace ” Chapel, purchase his ceramics in the Madoura atelier, and dine under his paintings at La Colombe d’Or, none of his homes have ever been open to the public—until now. 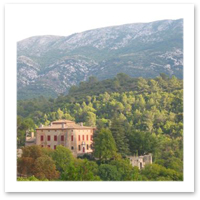 May 27th will mark the first day the public will be admitted to Picasso’s Château de Vauvenargues, which lords it over a tiny village of the same name.

Once inside, visitors will be able to view a suite of Picasso’s private rooms. These will include his bedroom and bath (on whose walls he painted a mural of a faun), and, most pointedly, his studio, which has been left exactly as it was, down to the last errant splatter of paint.

Fitted out with Versailles-size salons and baroquely sculpted fireplaces, the Louis XIV-style château seems a surprising choice for a modernist. The truth was that Picasso was also a bit of a monarchist: he loved to swan around with Parisian aristos and probably secretly delighted in the title that came with the château—as owner, Picasso became the Marquis de Vauvenargues. More to the point, the château’s enormous rooms made perfect ateliers for new works and handy storage for old: the famous “Picasso’s Picassos” secretly hoarded by the artist.

Picasso probably bought this isolated estate—set on the northern flank of Mont St-Victoire—in 1959 not only to escape paparazzi besieging his home in Cannes but as a homage to his artistic forerunner, Paul Cézanne. The 19th century painter had, in fact, revolutionized painting in his depictions of the mountain peak, so it was with delight that Picasso announced to his friends one day that “I have just bought Cézanne’s Mont St-Victoire”. Asked which one of the master’s 30 versions he had snagged, he replied “the real one.”

To see just how much these two heavyweights of modernism had in common, head to Aix and check out the Musée Granet’s revelatory Picasso-Cézanne show (May 25th to September 27th, www.aixenprovencetourism.com). 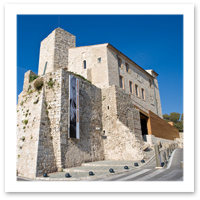 In the end, Picasso stayed on at the château only until 1961, when he returned to live in Mougins, wanting to recapture the gaiety of his years on the Riviera. That sense of joie de vivre is now gloriously on display at Antibes’s Musée Picasso, site of the other major Picasso show this summer.

Basically a shrine to the artist, the museum first opened its doors, in 1947, after Picasso accepted the curator’s offer to transform the 13th-century castle into a gigantic studio for the artist—an offer, as the saying goes, he couldn’t refuse (this was right after World War II, and everything was still in short supply, so Picasso had no recourse but to start painting on the stone walls). Now in love with Françoise Gilot and heartened that the horrors he had captured in Guernica were a thing of the past, he began to produce some of his happiest paintings, including the masterpiece Joie de Vivre, which is on display here along with more than 200 of his other works.

Newly restored, the noble old seaside château still seems to struggle to contain the energy and inspiration Picasso brings to its walls. The current Picasso 1945-1949: The Era of Renewal (March 27th to June 29th , www.antibes-juanlespins.com) focuses on the four blissful months he spent in Antibes.