Deals Leila Najafi Attention West Coast: You Can Now Book Flights to Paris for as Little as $321
Home  >  News   >   The Berner Oberland: Summer in Shangri-La

The Berner Oberland: Summer in Shangri-La 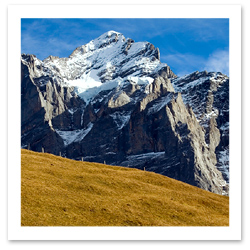 Think of Switzerland and you envision a land in Santa Claus territory — all snowy peaks and glistening glaciers. But the country’s catch-me-while-I-swoon vistas, as stunning as they are in winter, really come alive during summer. Meadows bloom with blue forget-me-nots and purple Johnny Jump Ups; mountains lose their monotonous snow coverings; and hotels are newly spruced up after their late-winter closings.

As editor of Fodor’s Switzerland, I decided to revisit the land of clocks and chocolate this past May. For the first time, I headed to the mountainous Berner Oberland region — home to the Eiger, the Jungfrau, and the Mönch, the veritable summit of summits that first put Swiss tourism on the map. New York-born pavement-slogger that I am, visions of Cary Grant in North by Northwest dashing about Mount Rushmore danced in my head. Would the high altitude get me down? Would melting permafrost rust out the bolts of my cable car? The truth is, I didn’t want to scale mountains. I just wanted to shake hands with them.

I was pleasantly surprised to learn that Switzerland has some of the most user-friendly peaks around. In no time flat, the Oberland’s vast network of aerial cable cars, chair lifts, and cogwheel railways made me into an easy rider. Here’s a tip sheet on some of the sights I saw that had me yodeling non-stop. 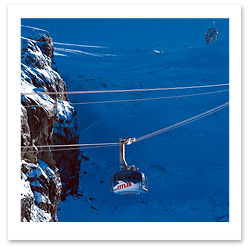 That’s a good question to ponder as you approach the cable car that launches you up 10,627-foot-high Mount Titlis — the highest summit accessible by cable car in Central Switzerland. I arrived in a rainstorm — “we are washing the mountain” joked the guide — and my adrenaline ratcheted up the minute I saw the tiny gondola that would take us up the first 5,000 feet. The four of us bumped over the giant steel girders in silence before switching over to the world’s first revolving Rotair cable car to complete the ascent. At the summit, the four-story ice-cave observatory was something out of Disney’s Space Mountain.

Over lunch in the restaurant, we took in the snowballs-in-May scene just outside the panoramic window. Altitude sickness often gives people headaches here, so have some aspirin for dessert. But if you don’t want mountains to affect your molecules — one reason I didn’t go to the highest railway station in the world atop the Jungfrau — visit Mount Pilatus, whose 6,953-foot peak shadows Luzern. From Alpnachstad, take the world’s steepest cog railway up to the summit, where the Pilatus Kulm hotel (once favored by Queen Victoria) offers a perfect lunch and a cave trail has been carved through the peak, offering half-earthly, half-heavenly vistas. 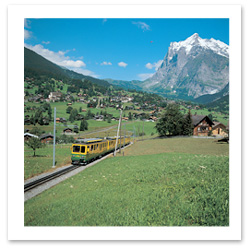 For more than a century, the “upwardly” mobile have headed to Wengen, a star of the Bernese Oberland region. Wengen is famous for its spectacular view 1,586 feet over the Lauterbrunnen Valley and its incredibly pink sunsets (the alpenglöh here is reputedly the glowiest in Switzerland). Following the tracks of such visitors as the king of Siam and the duchess of Marlborough, you take a toy-like cogwheel train that chugs up and back twice an hour from the valley floor. Wengen’s hotels have long taken luxury to new heights (if you ever felt the urge to rent a St. Bernard dog and take him on a walk, at so-many euros an hour, this is the place), and the Art Nouveau luxe still delivers at the Regina. But get a balcony on a high floor: so many chalets now jostle each other that large swaths of the fabled valley view have been obliterated. Happily, a few minutes up the mountainside (near the famous Lauberhorn run, used for the World Cup Ski Races every January), is the Wengernalp ridge — its vista of the Jungfrau peak is still so majestic you can understand why it inspired Lord Byron to write Manfred. 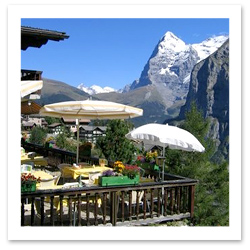 Considering Wengen a bit over the hill (sorry, I couldn’t resist), I decamped to the southern end of the Lauterbrunnen Valley and took two cable-car rides (roundtrip: 35 SF; it’s the Stechelberg-Mürren-Schilthorn Aerial Cableway, or LSMS) skyward to Mürren, a village with one foot on earth and the other in heaven. The town sits on a rocky precipice 5,413 feet high. The three peaks of the Eiger, Jungfrau, and Mönch seem close enough to touch across the valley. Though you may feel you’ve landed on top of the world, there are plenty of gemütlich hotels and cafés to keep you grounded. But if you prefer to raise the stakes even higher, hop back on the cable car and ride to the Schilthorn (9,742 feet), site of the flying saucer-like Piz Gloria observatory made famous as Ernst Blofeld’s hideout in the James Bond thriller On Her Majesty’s Secret Service. Now transformed into Europe’s first revolving restaurant, it is noted for its “James Bond breakfast” (sorry, no martinis), a time-out which allows you to watch the sun come up over a perpetual-motion view of icy peaks. For me, I preferred the staggering mountain view from the spa pool of the Eiger hotel — a sublime vista gave a whole new meaning to the term “peace summits.”

Is the view more sublime looking down from the top of the mountain or looking up from the bottom? To this eternal question, my hike through the Lauterbrunnen Valley offered a surprising answer — it’s the middle! The unreal beauty of this valley brings to mind the 1938 Hollywood film Lost Horizon, in which the hero discovers a magical Eden-like place — Shangri-La — buried in the ice-bound heights of the Himalayas; similarly, the lush and green Lauterbrunnen is set in the middle of a wintry, but far more accessible, mountain landscape. 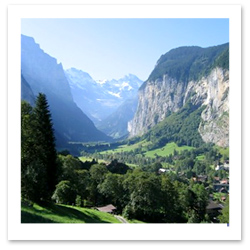 Framed by two towering 1,500-foot-high rock faces, the two-mile-long valley is spectacularly threaded by 70 waterfalls. Lord Byron described the largest, the Stabbach, as “the tail of a white horse blowing in the breeze” (if you ever wanted to see an upside-down waterfall, catch this one on a briskly windy day). To marvel at the valley in all its boundless splendor, head for the Panorama Spazierweg trail, a two-hour hike. The most picturesque stretch of the trail lies a mere 15 minutes from its starting point (the Stocki Road, on the left side of Lauterbrunnen village). Stop here, where the “locals” are mainly cows, to take your prize-winning panoramic photo. If you hike high, sleep low on the valley floor: claim what amounts to a front-row seat to the Lauterbrunnen spectacle at the Matratzenlager Stocki, a chalet-hostel in a Hansel-and-Gretel setting near the base of the trail — the porch has a million-euro view but the price is only 14 SF a night. In the end, my “peak” Switzerland memory is not of a towering mountain but of this viewtiful valley.