News Tina Charisma 'Regenerative Travel' Is the New Buzz Phrase, but What Does It Mean?
Home  >  News   >   A Postcard from Paris

A Postcard from Paris 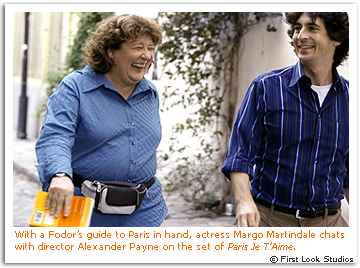 Actress Margo Martindale had heard the raves but remained unmoved. She had never visited Paris and had no plans to go.

“I just was never drawn to Paris,” said the 55-year-old Texan who has appeared in dozens of big movies, including The Human Stain and Million Dollar Baby. “People talk about the magical light of Paris. ‘Oh, that light!’ I thought, what bull—- !”

Everything changed when Alexander Payne, the writer and director of Sideways, called. “He called me up out of the blue and said, ‘I’ve written this movie for you. Do you want to go to Paris for a week and shoot it?'”

Who could say no?

Payne’s short film would become “14th Arrondissement,” the last vignette in Paris Je T’Aime, a new movie made up of 18 shorts set in different neighborhoods of Paris. In Payne’s short, Martindale plays Carol, a rotund letter carrier who’s about to fulfill one of her lifelong dreams — a vacation to Paris. But she can’t stay for long, needing to return to Denver after a week to take care of her two dogs, Lady and Bumper.

Although she’s a fictional character, perhaps you’ve seen Carol in Europe before, sticking out like a Union Jack on the Champs-Elysées. She’s poorly dressed, sporting a fanny-pack, a voluminous blue blouse, khaki pants, and bright white sneakers. She hobbles around the city, making no attempt to conceal her guidebook, curious about where she is but clueless about how she comes off. She speaks some French — studied it for two years, in fact — but no one will speak to her because of her grating American accent.

“It was almost like Alexander could see inside me when he wrote this,” Martindale said, embracing the tackiness of her character. “I think so many people feel that feeling of being alone. I’ve felt that — being in different countries shooting by myself.”

Carol narrates her experiences in the form of an essay for her French class, which produces hysterics because her accent is so poor. “At Cannes [where the film first debuted], the moment I opened my mouth people just broke out laughing.”

Carol walks around the city, through the unremarkable 14th arrondissement. Instead of looking out over all of Paris from the picturesque butte Montmartre, she rides the elevator up the super-commercial Tour Montparnasse to catch a glimpse.

The skies are gloomy, and she thinks of a former love interest, Dave, who’s now married with two children. Then she moves on. She inquires in French about finding a “bon restaurant” but is directed in English to an ordinary Chinese traiteur, probably on the assumption that an American would enjoy such a place.

Finally, she comes upon a park. It’s not the stately Luxembourg Gardens, but instead the charming Parc Montsouris, on the edge of the 14th arrondissement near the Cité Universitaire. Surrounded by elderly Parisians chatting on park benches, and younger ones sunbathing on the grass, a feeling comes over Carol. “Maybe it was something I had forgotten, or something I had missed my whole life,” she says, closing her essay. “All I can tell you is, at the same time I felt joy and sadness. But not a great sadness. Because I felt alive — Oui, alive.”

Paris is the perfect place for life to imitate art, which might be why Martindale fell in love with the city just as her character did.

“When you’ve traveled a lot, you think, ‘Oh, it’s just going to be another city,'” she said. “But it is so not another city. Everything felt completely realized, like out of a movie.”

Martindale said she plans on going back to Paris for several weeks to explore the city.

“I was just trying to convince my husband to go,” she said. “When I go back I’m going to know more French — and dress better. I think you really do need to dress up. Everybody dresses up. And everybody’s skinny. Maybe I’ll lose a little weight, too.”