News Apeksha Bhateja Have $340,000 and Want to Vacation in a Survivalist's Paradise?
NewsA Perfect (Food-Filled) Day in Beirut

A Perfect (Food-Filled) Day in Beirut 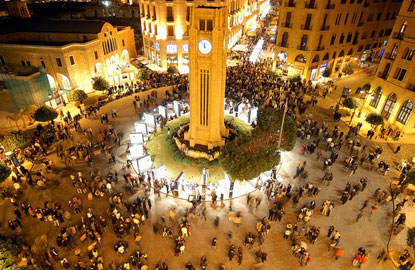 Editor’s note: Salma Abdelnour is the author of the newly released Jasmine and Fire. Here she gives us her take on the perfect day spent strolling around Beirut.

Beirut is one of the world’s greatest pedestrian cities. Ok, that’s an exaggeration, but there is so much potential! Beirut is, in many ways, an ideal city to explore on foot; but at times it can be a pedestrian’s nightmare. The key is to plot your adventure so you can pack in the maximum amount of discovery and fun, and dodge the things that will slow you down, namely missing sidewalks, nutty driving patterns, and locals who appropriate street corners as their own personal patio, complete with plastic deck chair, hookah, and coffee pot.

But here’s why walking in Beirut is worth the trouble: gorgeous old houses and gardens hidden along alleyways that you can see best on foot, and dreamy views of the Mediterranean from all over the city, and a street life that’s incredibly vibrant and diverse, with bustling cafes and shops everywhere, ruins that date back from ancient Rome up through the Lebanese civil war, music thumping out of cars and doorways, and never ever a dull minute.

A bonus: Street crime is nearly non-existent, and everywhere you look you’ll find locals wanting to help you with directions or tips and who speak fluent English. Few cities are more rewarding for the eager and patient explorer. And you can always hop in a taxi (they’re cheap and they’re everywhere) when you need to.

Here’s an ideal itinerary for a full day spent roaming around Beirut—on foot and on wheels. Bring a healthy appetite.

9:00 am: Pick up a zaatar croissant for breakfast from La Cigale, a pastry shop in the bustling Hamra neighborhood of west Beirut. Lebanon balances its identity as an Arab country with remnants of its French-colonial past, and a buttery croissant filled with zaatar—a tangy spice mix made with wild thyme, sesame seeds, and sumac—is a particularly delicious way to indulge in both sides. The zaatar croissants here sell out early, so it’s best to time your visit accordingly.

To get to La Cigale: If you’re staying across town in the Achrafieh neighborhood, for instance at the charming boutique Albergo Hotel, or downtown at the swank new Le Gray on Martyr’s Square (both are terrific options), grab a taxi out front and say you’re going to the Mayflower Hotel in Hamra. Taxis and locals rarely go by street names here, preferring instead directions that reference famous landmarks. Every taxi in Beirut knows where the Mayflower is, even though it’s quite run-down these days; it became famous for hosting foreign reporters during the Lebanese civil war.

Insider’s Tip: La Cigale bakery is right next door to it. The bakery is takeout only, but you can enjoy your croissant as you’re walking.

About 10 paces from La Cigale, to your right, is a hole-in-the-wall bakery called Furn El Hamra that makes excellent man’ouches, zaatar-slathered flatbreads that make for classic Lebanese breakfasts; grab one if you have room.

9:30 am: Starting from the doorway of La Cigale and facing out, walk to your right and then take your first right; walk down that short block to the first big intersection (Jeanne D’Arc Street), where you’ll take a left and stroll a few blocks downhill until you hit a dead-end: This is Bliss Street. At the intersection of Bliss and Jeanne D’Arc, you’ll be facing the entrance to the American University of Beirut campus.

If the security guard at the gate asks for your campus ID, ask if you can take a quick visitor’s tour; the campus is gorgeous, its hilly walkways curving between century-old brick buildings and sloping down to the edge of the Mediterranean. If the guard is in a good mood he’ll let you take a tour, sans I.D. Otherwise ask him to direct you to the Corniche, the seaside boulevard that’s a 10-minute walk from Bliss Street. When you get to the Corniche, follow closely behind other pedestrians as you walk across the boulevard to get to the waterfront sidewalk; cars will stop for you, but it’s better to trail a local as you weave through the traffic.

10:00 am: When you reach the seaside promenade, head to the right—east—and take in the Mediterranean breeze as you stroll along. Watch cyclists and pedestrians and joggers go by, or rent a bicycle and take a relaxing ride. Imagine this coastline in the first century B.C., when Beirut was the ancient Roman colony of Berytus.

Keep strolling for about 30 minutes, stopping to rest on one of the benches if it’s a hot day. You’ll reach an Ottoman-style building with a red roof in which you’ll find the Maison de L’Artisan, a shop selling beautiful Lebanese handcrafted items, from textiles to glassware to jewelry, at a variety of price ranges (Corniche, Ain El Mraisseh district). Pick up gifts for yourself and your friends. A few paces ahead along the Corniche is the pricier shop Artisans de Liban et d’Orient, which sells exceptionally stunning Lebanese handmade clothing and housewares. (Note: You can pay in USD anywhere in Beirut.) 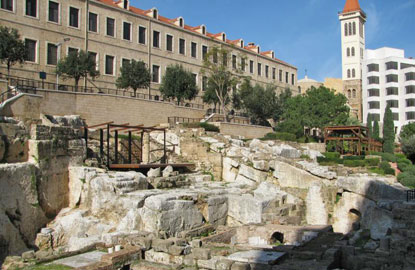 Noon: Hop in a taxi and ask the driver to take you to the Najmeh, aka L’Etoile, the star-shaped plaza in downtown Beirut. Walk around the car-free streets of downtown, exploring the centuries-old churches and mosques that have been painstakingly restored, and stopping to peer down at the ancient Roman baths, excavated in a park just below the Parliament building downtown (pictured). There are lots of benches and cafes all over, where you can sit and catch your breath. 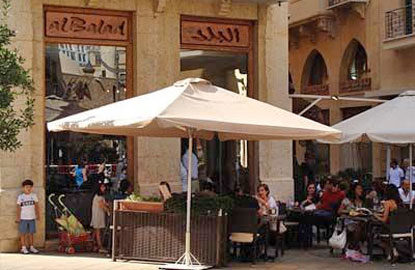 4:00 pm: After lunch, walk east from the Najmeh toward the giant empty square in the middle of downtown; that’s the historic Martyr’s Square, with its statue of Lebanese revolutionaries hanged by the Ottomans.

Stop for a coffee or mint lemonade, a Beirut summer favorite, at Balima (Ghalghoul Street, in the center of Saifi Village). Or head back to your hotel for a disco nap: The Albergo and Le Gray are both a short walk from here, but you can always jump in a cab.

7:30 pm: Dress up in your favorite casual-chic outfit for a night of drinks, dinner, and drinks again. The Albergo and Le Gray both have fabulous rooftop bars. Have a round or two of drinks there. There’s no rush; dinner in Beirut starts late. 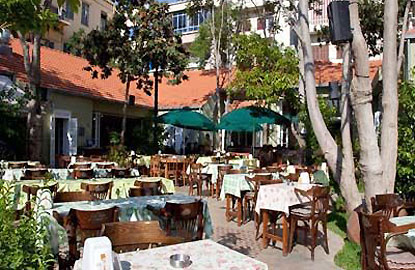 9:00 pm: Take a taxi to Al Falamanki restaurant on Damascus Road in Achrafieh. The restaurant is walk-able from both hotels, but the streets are twisty and have no signs (like most in the city), so it’s easiest to grab a cab. Or ask locals to point you the right way if you’d rather walk.

Al Falamanki is a local institution, and many pedestrians will know it. Sit on the terrace or in the pleasantly crowded dining room, and order traditional dishes like the fattoush salad made with fresh tomatoes, mint, and fried pita bread, and try the chicken livers in pomegranate nectar and the shish taouk (char-grilled chicken). Hookahs are plentiful if you’d like a little fruit-flavored tobacco after dinner. 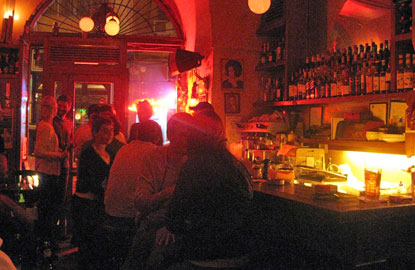 11:00 pm. Cabs are usually lined up right outside Al Falamanki. Take one to the Gemmayzeh neighborhood and ask the driver to drop you at Bar Torino on Gouraud Street, the neighborhood’s main drag. The bar will be on your right as you head up the street. Torino is a perpetually packed, hip little bar, and its good place to start, but Gouraud is lined up and down with bars and restaurants. 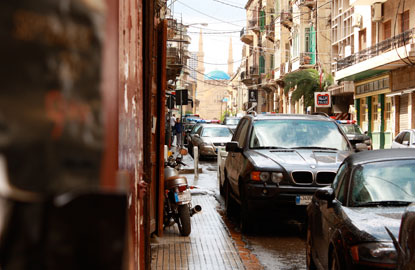 Walk around, people-watch, try out a few different spots—you’ll find everything here from cozy pub-style spots to swanked-out clubs. Order the Lebanese Almaza beer, or the local "doo doo shot," which tastes like a miniature dirty martini.

Midnight: Stay in Gemmayzeh and continue your bar-crawl, or take a cab to the uber-hip rooftop pub Coop D’Etat in the trendy Mar Mikhael neighborhood nearby. The bar is adjacent to the Coral gas station, which any cab driver will know.

Enter to win a copy of Jasmine and Fire!

Salma Abdelnour is a writer and editor based in New York City. She has been the travel editor of Food & Wine, the food editor of O, The Oprah Magazine, and the restaurant editor of Time Out New York. She is the author of the newly released Jasmine and Fire.