The Perfect Day in Amsterdam

Author Russell Shorto was so captivated with Amsterdam during research trips for two best-selling books that he decided to move there permanently. His latest book, Amsterdam: A History of the World’s Most Liberal City, goes on sale today and can be read as a love letter to his adopted city. He shares his perfect day in the Netherlands capital with Fodor’s. 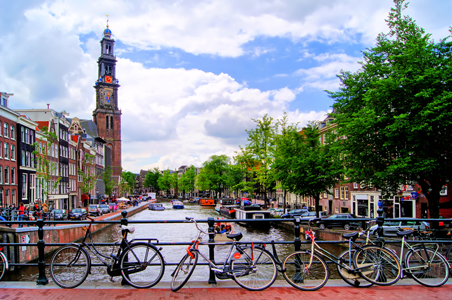 After living for six years in Amsterdam, arguably the greatest small city in the world, I have amassed enough experiences to fill several perfect days. But ‘Several Perfect Days in Amsterdam’ didn’t have the same punch, so I’ll restrict myself to just one.

Amsterdam is not a city that starts early. I am always amazed by the fact that cafes often don’t open until nine or ten in the morning. Cafes, the places that are supposed to fuel you for the day ahead! Anyway, in order to give the cafes time to wake up, I like to take advantage of Amsterdam’s sleepiness by hiking or cycling through a part of town before it’s awake. The city early in the morning seems frozen, as in a painting—even more so if you catch it on a winter morning, with a light snow falling. The people you encounter on the streets in the morning seem stunned and a bit ruffled. I like the Binnenkant at this time of day, with its canal-side houses that were built for seventeenth century ship’s captains. You can follow this stretch of water out to the harbor, where the warehouse of the West India Company still sits proudly overlooking what, in the city’s heyday, was a “forest of masts.” If you were to get inside and up to the top floor, you’d catch a sweet whiff of the tobacco leaves that were stored there three hundred years ago.

Amsterdam has, I think, three distinctive identifying adjectives. It is quaint. It is genteel. And it is seedy. Not all in the same places, of course. The Nieuwmarkt, the center of the old medieval quarter, including the Red Light District, is Amsterdam at its seedy best. You could come here in the evening, of course, when it’s throbbing with activity. But at this hour, when it’s still strewn with trash from the night before, you can savor the seediness. This is Old Amsterdam, the place sailors on leave used to roam and prostitutes working the morning shift sat in nearby windows, yawning. On the Zeedijk is a cafe that does a good job of embodying the meaning of quirky, Latie. It opens early and is tiny, crammed with old mismatched tables and chairs, and serves a combination of organic vegetarian fare, Indonesian food, fresh juices and coffee. It also doubles as a flea market; you can buy old lamps here, which hang from the ceiling with price tags attached or you can even buy the table you’re sitting at. You can linger here with a large gewoone koffie (“ordinary coffee,” meaning without milk) or cappuchino and an egg sandwich or slice of apple pie, watching the grungy morning rituals of the Nieuwmarkt unfurl out the big windows.

I like the Haarlemmerstraat for shopping and strolling. I’m not a great one for fashion, but my favorite clothing store in the city is Sabarly, whose French owner assembles a small but interesting collection of items from European and Japanese makers. It used to be just men’s clothing, but recently they’ve added women’s. In the shops nearby you can buy olive oil, Spanish cured ham, marijuana, old jewelry, Flemish bread, and French pastries. Further down the street I’ll often stop into the shop called Vivian Hahn, whose owner, of the same name, is a friend of mine. Vivian, a native of California who has lived in Amsterdam for decades, sells exquisite tableware and crockery from small designers. 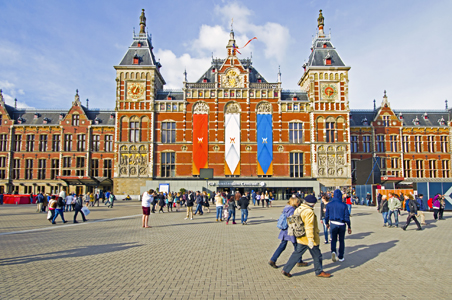 My favorite Amsterdam lunch is found at one of the traditional street-side herring kiosks in the city. Dutch herring is lightly preserved in brine. In Amsterdam, you can get it served on a little paper tray, sliced into bites, or on a bun with chopped onions and sweet pickles. There are two excellent places in the Haarlemmerstraat neighborhood to choose from. Stubbe is a traditional kiosk at the start of the street near Central Station. VOF Vishandel, further down the street, is a shop that also sells a variety of fresh and deep fried seafood to go.

Prinseneiland is the place to go in Amsterdam to feel like you're in some little Dutch fishing village of a century past. It’s just a few steps from the trendy bustle of the Haarlemmerstraat, but in those few steps you will (perhaps unwittingly) be crossing off of the mainland and onto a manmade island. There are actually three little islands here in the harbor, all created in the seventeenth century using earth that was dug up to make the canals. Prinseneiland, Bickers Island and Realen Island are packed higgledy-piggledy with little doll-like houses, rimmed with old fishing boats, and connected to each other by nineteenth-century wooden drawbridges. Here the throb of the city vanishes; the silence is broken only by the plash of boats plying the water and the bucolic grunts from a children’s petting zoo. 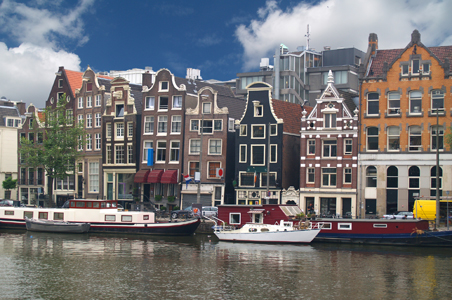 Amsterdam is most essentially a product of the seventeenth century, when Rembrandt and his fellow artists smashed the old mold of Catholic art and created a new aesthetic that was secular and focused on individuals. Dutch paintings of the seventeenth century are the first representations of the modern. They still fascinate. And they don’t have to be priceless works to fascinate: you could buy one for yourself. One of my very favorite stops in the city is at the atelier of Jan Six on the Herengracht, the city’s stateliest canal. Jan is a dealer in seventeenth century Dutch paintings, the sort of man who can leave you spellbound by recounting the story of a recent painting he’s picked up. The story might involve the subject, the artist, the method, the light, the objects, or the hairstyles depicted. He can make the city’s past come alive as few others can. And if his name is familiar, it may be because he comes from a pedigree that uniquely suits him to his work. He is actually Jan Six XI: the eleventh descendant of a man named Jan Six who was painted by Rembrandt. That picture has been called the greatest portrait of the seventeenth century, and it hangs nearby, in the Six Collection, which is still maintained by the Six family.

I said before that quaint is one of the adjectives that typifies Amsterdam. The essence of quaint is the length of the Nieuw Spiegelgracht from the Prinsengracht to the Singelgracht. It’s best taken by bike because the bike lane runs right along this postcard-pretty stretch of canal. Both sides of the water are lined with canal houses, most of which date to the seventeenth century, and which together show off the succession of gable styles that define that era. The ground floors of the buildings are packed with antique shops, many featuring Asian crafts. The little boats moored along here are smaller and prettier than in many other spots, their bright colors reflecting off the water. 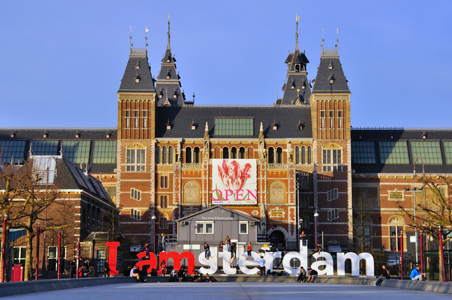 If you were to keep cycling in a straight line from the end of the Nieuw Spiegelgracht you would bike right into the Rijksmuseum, the city’s (and the nation’s) repository of art and history, because, as of mid-2013, the bicycle path that runs straight through the building is reopened. What better statement could there be of the primary role of bicycles in the city than to have its premier cultural institution be so accommodating to cyclists? But don’t just ride through the grand colonnaded tunnel stop to peruse the newly renovated museum.

Beer! As much as Amsterdam is defined by its art, canals, and famous permissiveness, it can be equally identified by beer consumption. There are many great cafes, but if I were going to pick a single one as a stop on my perfect day in the city it would be In ‘t Aapjen, back down near the harbor. It is the city’s oldest pub, dating to around 1600, and it has the ancient, lacquered-wood style to go with the pedigree. The name, which means In the Ape, comes from the fact that back in the day sailors would come ashore and cruise in here for drinks bearing whatever they’d brought from all parts of the globe, and many returned from East India with pet monkeys and apes; if you were lodging in one of its upstairs rooms long ago, you’d just say, “I’m staying in the Ape.” Amsterdam cafes don’t traditionally serve dozens of different beers, but rather each will specialize in a few. As elsewhere, tradition is giving way to corporate commercialism, with the big breweries muscling out small boutique brands, but you can still find fine beers, as well as lots of varieties of jenever, Dutch gin.

My default restaurant for a wonderful meal in Amsterdam is Bordewijk. The look of the place is bold, with bright colors and modern furniture, but the food is a combination of classic continental dishes and flash flavors. The wine list is excellent and the place never disappoints. It sits on the Noordermarkt, just opposite the hulk of the Noorderkerk, one of the great churches that anchored the city in its golden age. The square itself is taken over by an organic food market on Saturdays and a flea market on Mondays. 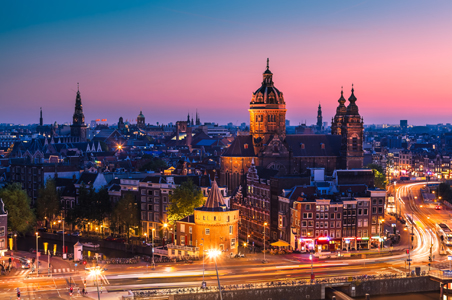 Amsterdam is a low-slung city without any skyscrapers. To enjoy a great city view, and for the perfect place to end an evening, visit Twenty-Third bar, which is located on the same numbered floor of the Okura Hotel. Here you can enjoy a magnificently made martini. The grachten gordel, the horseshoe ring of the city’s seventeenth century canals, spreads before you, offering visual contemplation of the brief moment in time when Amsterdam was, improbably, the greatest city in the world.

Russell Shorto is the bestselling author of The Island at the Center of the World, Gospel Truth, and Saints and Madmen. He is a contributing writer at The New York Times Magazine and the Director of the John Adams Institute in Amsterdam, where he lives.