Deals Leila Najafi Attention West Coast: You Can Now Book Flights to Paris for as Little as $321
Home  >  News   >   A Guide to Tel Aviv’s Best Beaches

In Israel‘s seaside metropolis Tel Aviv, everyone seems to reflect the glow of the cerulean Mediterranean and the golden beaches that run alongside it. The city’s culture and beach lifestyle are intimately intertwined, with both day and night seemingly revolving around the beach.

To take in Tel Aviv properly, it’s key to know how to soak up the sun and spend time outdoors as the locals do. For tips on what beaches to hit, what to bring beachside, and how to keep nourished, fit, and entertained while on the shore, herewith the lowdown to beach life à la Tel Aviv. 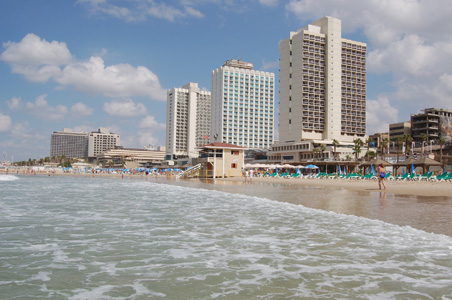 While Tel Aviv’s coastline is continuous and easy to traverse, each beach has its own distinct character and vibe. To easily orient yourself, note that beach locations are typically referred to by the name of the streets that front them.

The Gordon-Frishman beach, dotted with red umbrellas, constitutes the main beach strip. It’s one of the more buzzy beach scenes, often packed with beachgoers seeking to see and be seen.

Metzitzim beach, near the port, is one of the most legendary beaches in Tel Aviv, eternalized in the 1970s Israeli movie of the same name. Thanks to its star-studded history, it still draws a stylish set of locals.

Surfers head to Hilton Beach (it borders the Hilton hotel) to catch waves. One section of it is considered gay-friendly, while dog owners take their canines to splash around in the northern part. Regardless of its subsections, this strip is frequented by a mix of families, tourists, and locals alike.

For a more peaceful beach experience, head away from the hubbub of Tel Aviv’s central hot spots, and seek out havens to the north like peaceful Herzliya and family-friendly Jaffa Beach. 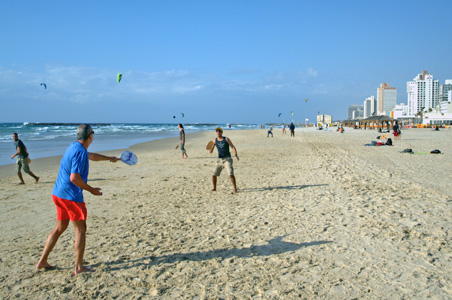 The pitter-pattering of a ball hitting wooden paddles is part of the unique soundtrack of Tel Aviv beach life. Matkot, also known as paddleball, is a cherished pastime in Israel that everybody—from the wee ones to the still-nimble elderly—play for hours on end. Feel free to join in, so long as you understand that even though it’s a recreational sport, most people look like professionals and take it seriously, lobbing hard hits. 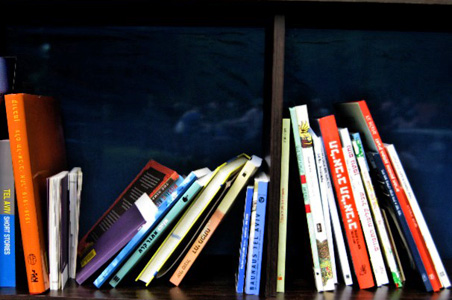 Forgot your beach read? No problem. A new initiative by the Tel Aviv municipal government has established a library on two wheels at Metzitzim, stocked with more than 500 titles in English, Hebrew, Arabic, Russian, and French, which beachgoers are free to borrow while sunning. Ever a tech-focused town, free Wi-Fi is available throughout Tel Aviv, if you prefer to download your preferred beach read instead. 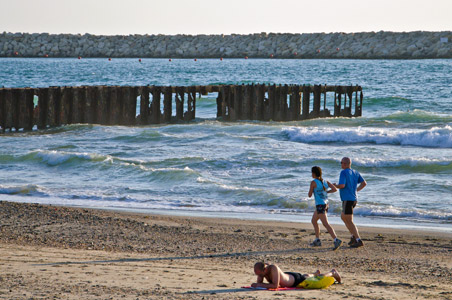 Get in a Workout

Athletic, bronzed Tel Aviv residents take time to care for their appearances and often take their workouts to the beach, multitasking a sweat session with a tanning one. The boardwalk that hugs the beaches and connects them up and down the coast is swarming with runners, especially at the start and end of the day when it’s cooler. Plus, local folks readily utilize the outdoor gym at Gordon Beach. 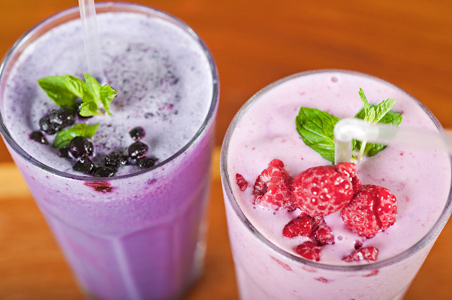 For some sweet, healthy sustenance, stop off at any one of Tel Aviv’s numerous smoothie stands. One is never set too far from any given beach, and they’re easy to spot, generally painted in a scheme of bright reds and yellows. A hallmark of Israeli food is its lip-smacking freshness, and heaps of locally sourced produce are piled high at the stands. You can create your own mix, or try our favorite blend, whipped up with a banana and date base. 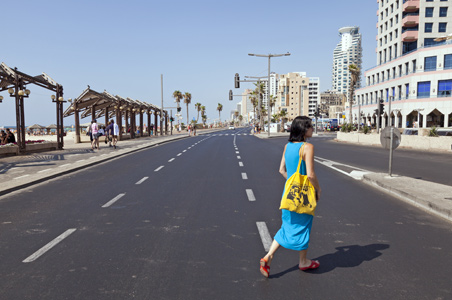 Tel Aviv residents are a fashion-conscious bunch, and a beach day is no excuse to leave style behind. Most forgo traditional towels for sarongs, and the bashful needn’t apply as evidenced by the many teeny bikinis and snug swimsuits. 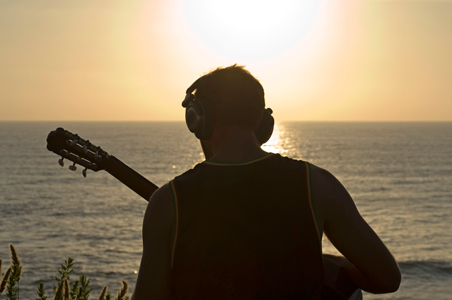 Tune in to live music on the sand, thanks to fellow sunbathers who often bring along guitars or drums. To up your chances of stumbling upon an impromptu beachfront concert, make way for the aptly nicknamed Drummers Beach, set near the former Dolphinarium. Many also set out to the shore come nightfall, particularly to Clara Beach Club. The dance club is a perennial Tel Aviv nightlife favorite, and for years has maintained its privileged title as one of Tel Aviv’s coolest clubs.