News Larry Bleiberg You Can Finally Look Inside This Stunning D.C. Landmark. But Only for Another 25 Days
Home  >  News   >   A Grand Tour of Greece

A Grand Tour of Greece 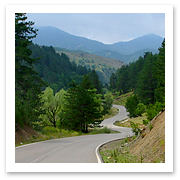 Among the pleasures of Greece are scrambling over time-burnished ruins, discovering an island you never want to leave, or simply lingering over a glass of ouzo on a taverna’s terrace. To shorten this grand tour, make the Meteora and Delphi a long day trip, or bypass Corfu. To do so, however, means foregoing the experience of rambling through mountain villages and island ports.

Days 1-2: Athens
The overture is your two-day tour of Athens. From the majestic Parthenon to hip Thission and edgy Psirri, the city remains a dazzling paradox of ancient and modern.

Day 3: Hydra
After your two days in Athens, hop the Flying Dolphin hydrofoil from Piraeus harbor for the 45-minute trip to this traffic-free island of stunning 19th-century stone mansions and idyllic seaside walks.

Days 4-5: Nafplion
The charm continues in Nafplion, whose wide waterfront promenades, hilltop Venetian fortress, and maze of neoclassical houses make it the prettiest town in the Peloponnese. Classical ruins are abundant here, so explore Bronze Age Mycenae, the acropolis of Tiryns, or the great Theater at Epidauros. If a beach beckons, head to nearby Tolo or Porto Heli. 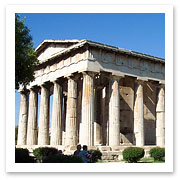 Day 6: Arcadia
The Arcadian mountains have many picturesque villages, but if you stay in Andritsena, you will be well poised to visit the Temple of Apollo, at Bassae, in the clear light of early morning. (photo, right)

Day 7: Olympia
Explore the site where the ancient Olympic games were held in honor of Zeus. The god’s Doric temple still dominates the sacred sanctuary as it has since the 5th century BC, though many of its broken columns now lie scattered under the noble pine trees.

Days 8-10: Patras-Corfu
A travel day takes you north to the transportation hub of Patras, from where you can book a ferry ride for the 10-hour trip over Homer’s “wine-dark” sea to the Ionian islands, the realm of Odysseus. On Corfu, stroll up Venetian arcaded streets and down the Esplanade in Corfu town; then ride a donkey through the lush green countryside.

Days 11-12: The Meteora
After taking the Igoumenítsa ferry back to the mainland, begin the scenic drive (photo, top) through the Pindos Mountains to the slate-roofed village of Metsovo. 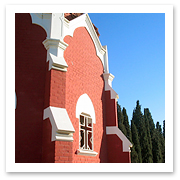 Then drop onto the Meteora plain, where Byzantine monasteries appear to float in midair atop their rocky pinnacles

Days 13-14: Thessaloniki
Head north to the city of Thessaloniki, which, like the mythical god Janus, is two-faced: a charming old town of churches, gardens, and monasteries backs into a vibrant modern town set along the bay. Don’t forget the treasures on view at the Archaeological Museum. (photo, right)

Day 15: Mt. Olympus
An easy excursion takes you to the village of Litochoro on Mt. Olympus. It’s easy to see why the gods chose to inhabit these airy heights.

Day 16: Delphi
Next morning travel to Delphi, the “navel of the earth,” to feast your eyes on the Temple of Apollo and the museum’s celebrated Charioteer bronze. 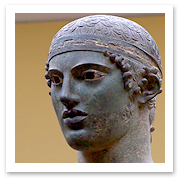 At sunset, when this spur of Mt. Parnassus is bathed in warm, deep purple light, ponder the Delphic Oracle’s most famous pronouncement: “Know thyself.” Overnight here, and then head back to Athens.