Beaches Kaila Yu Do You Enjoy Visiting Hawaii? You Should Pay a Fee
Home  >  News   >   A Foodie’s Guide to Cleveland

A Foodie’s Guide to Cleveland 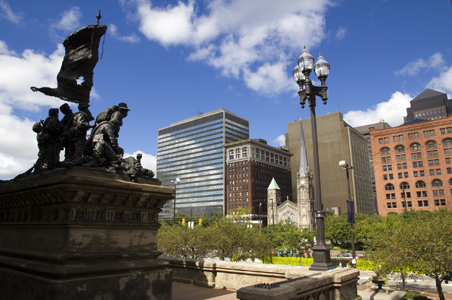 Some come for the Rock and Roll Hall of Fame, others for the wow-factor collection at the Museum of Art, but thanks to tenacious old-schoolers and culinary young bucks alike, eating and drinking may just be Cleveland‘s new top attraction. This post-industrial town is trading rust for lust—for great food. People here have a fierce appetite for dining, whether it’s a kraut-buried kielbasa sandwich or a cacio e pepe kale salad. Follow the locals to these five can’t-miss Cleveland experiences.

1. The "Smokies" at West Side Market

Just across the Cuyahoga River, the train takes less than 10 minutes from downtown Cleveland to the 101-year-old West Side Market. Inside this sprawling hall, locals bustle beneath the arched ceilings crusted in Guastavino tiles, stocking up on fruit-rippled strudels and lavishly buttered pierogi. Meat vendors dominate the stalls—whole carcasses are butchered in the massive refrigerated basement—and many make their own charcuterie. "Smokies," smoked Slim Jim-like meat sticks, are a big regional snack, and no one does them better than Sebastian’s Meats in the middle of the market. Pick up a pound of their maple-laced Smokies—because they’re fully cured, they don’t need to be refrigerated and make a great souvenir to take home.

2. The Coffee at the Firehouse

Cleveland is full of young, homegrown entrepreneurs. Graham Veysey grew up in the handsome streetcar suburb of Shaker Heights and is at the core of the revitalization of the Hingetown district of Ohio City, where more than 30 independent businesses have opened in the past year. Veysey and his girlfriend and business partner, Marika Shioiri-Clark, restored the old Ohio City Firehouse two years ago: It’s now home to a florist, work space, and Cleveland’s finest cup of coffee at Rising Star Coffee Roasters. As the name suggests, owner Kim Jenkins, the former Director for Research and Technology at Lockheed Martin, roasts his beans on site "with the same precision that he used to design rockets," says Veysey. You can enjoy them in their purest expression, a pour-over cup brewed to order, or in clever concoctions like the Cardamom Bomb, a brown sugared-and-spiced cappuccino made with local milk.

3. The Backroom at Velvet Tango

On the fringe of the leafy Tremont neighborhood, Velvet Tango Room occupies a neat, unassuming, schoolhouse-style brick building. Were it not for the burning pink neon sign in the teal-trimmed, drawn-blind windows, you’d figure it more for a tasteful Tremont rehab than Cleveland’s eminent drinking destination. Inside, it’s all swizzles and sours for the cocktail cognoscenti, prepared without the pomp or pretention you’re accustomed to seeing in other cities’ speakeasies. What the space lacks in aesthetics—the floral carpets, jazzy art, and burgundy walls evoke the misguided élan of a ’90s catering hall—the staff makes up for in warmth and graciousness. If you ask nicely, they might even take you on a tour of the reservations-only Backroom, a wainscoting-wrapped secret study with a dedicated bar, brimming bookcases, backyard putting green, and much-improved sense of style.

4. The Pig’s Head at Greenhouse Tavern

If Michael Symon is Cleveland’s culinary king, then Jonathan Sawyer is its prince—who’s threatening to usurp the throne. Young, industrious, and nationally aware, Sawyer is not unlike new Cleveland itself, and his flagship restaurant, Greenhouse Tavern, remains the town’s most relevant restaurant. Located on West 6th Street (a mall-ish downtown drag that’s kind of a drag) the bi-level Tavern specializes in gutsy, vivacious American cooking—your table might feature exquisitely al dente fettuccine darkened with pork blood, elegant clams steamed with late-harvest Viognier and foie gras, or Ethiopian-spiced duck sausage stuffed into a head-on, crispy skinned duck neck. Sawyer’s piece de resistance, though, is the pig’s head, a half noggin brined in molasses, brown sugar, salt, and spices, then braised in red wine and cola and crisped to order. The one-sided face arrives on a silver platter with assorted roughage, pickles, buns, and barbecue sauce for DIY sandwich making. It’s a great dish to share—or not.

5. The Lunch Line at Sokolowki’s

On the opposite end of the culinary spectrum of Greenhouse Tavern, Sokolowski’s University Inn is a Cleveland institution where cartoonish portions of pierogi, paprikash, bratwurst, kielbasa, and other Polish and Eastern European classics have been sustaining locals for 90 years. Grab a plastic tray and line up cafeteria-style for lunch; you pick and choose what you want, and the women behind the counter fix your plate. Pay at the register and grab a seat in the dining room clad in faux-pine paneling and framed pictures of family members, football teams, popes, and saints. A little devotion may indeed be in order: You’ll need divine intervention to avoid slipping into a food coma after finishing your hearty lunch.