A Flight Attendant’s Cure for Fear of Flying 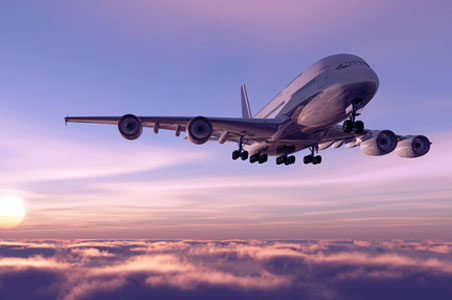 It was the last day of flight attendant training, and we had just finished the final exam. My fellow trainees and I sat outside in exhausted silence, nervously waiting for our test results. Some of us smoked cigarettes, most just stared at the ground, airport codes and evacuation commands swirling around in our heads.

Then Garrett, a young man from Kansas City, blurted out: “Actually, you guys, I’m kind of afraid to fly.”

We all burst out laughing.

We made jokes at Garrett’s expense, but I have to admit, I used to be afraid to fly, too. Used to.

Flight attendants get asked all the time what to do about fear of flying, and here’s my advice:

Now, before you have a panic attack, hear me out.

In my pre-airline years, if I had to take a flight, I would dig my nails into the armrest and scrunch my eyes shut when the plane took off, when it climbed to altitude, turned, descended, or so much as suggested the possibility of turbulence. Landing was the worst.

Even as I headed to flight attendant training (which, by the way, has a lower acceptance rate than Harvard…ahem), there was still a part of me that thought I might be signing my own death certificate. The part of me that wanted to see the world without paying for it, however, was just a little bit stronger.

And for four weeks, 10 hours a day, six days a week, our instructors inundated us with gruesome stories of fireballs, decompressions, hijackers, and failing engines. Sure, we spent a few hours on airport codes and beverage carts, but, mostly, it was plane crashes.

Oddly, though, I found that the more I learned about flight, and more specifically, flight emergencies, the less I became afraid to fly. It turns out, on vast majority of flights where something goes wrong, the plane lands safely and everyone is fine.

I repeat, even in the rare instances when there is an emergency, it isn’t hopeless. Your tragic fate is nowhere near sealed.

In fact, did you know that crewmembers make safety-related errors on 82 percent of all flights, with an average of three mistakes per flight? (Breathe. That’s a good thing.) That means pilots, flight attendants, and airplanes don’t have to perform perfectly in order to get you to your destination alive and in one piece. After all, 82 percent of flights aren’t crashing. There is room for error, and contingencies for the contingencies for the contingencies.

Let me give you an example. When you hear the lead flight attendant instructing her colleagues to “prepare” or “arm” their doors, she’s actually asking for a very specific procedure. First, we must remove ourselves from all distractions—that means immediately stopping any conversations and going to our assigned door. Next, we hold the bracing handle with one hand. With the other hand, we remove the safety pin from the door, lower the lever that activates the emergency slide and re-insert the pin to lock the lever in place. Then, we look across the aircraft and confirm that our colleague has armed her door correctly. We say out loud to one another, “Armed and crosschecked.” We call the lead flight attendant and tell her we’re armed and crosschecked. She tells us she’s armed and crosschecked. Then she looks at her panel to make the sure the aircraft computer says we’re armed and crosschecked. There’s also an alarm in the flight deck that will ring, just in case.

That’s six chances to catch a possible mistake, and that’s just for activating the slide. Imagine what the procedures and contingencies are like for the engines and the brakes.

(While we’re on the subject of doors, let me just clear something up real quick: You can’t open the aircraft doors during a flight. It’s physically impossible. The pressure is so great that even Arnold Schwarzenegger couldn’t do it. So when you read a story about a passenger going berserk and trying open the door, he does not hold the other passengers’ lives in his grip. We’ll still arrest him though, because that’s pretty messed up.)

There’s a reason that pilots spend so much time in school, and it isn’t because flying is complicated. The actual mechanics of getting a plane to go up and down are not that complex. The reason flight school is so long is because pilots are drilled, over and over, on how to handle every possible thing that has ever gone wrong on an airplane, ever—and even some things that never have but could.

It’s actually really hard to make a commercial plane crash with no survivors. Planes are not precariously suspended in the sky, and there’s no scenario in which a crewmember presses one wrong button and the plane explodes in the sky.

So back to the day I finished flight attendant school. When we went back to the classroom, we found out we had all passed with flying colors (pun intended, deal with it). That night in the hotel lounge, our celebration was interrupted by news that a commercial jet had declared an emergency. Its nose gear had jammed and turned in the wrong direction. For the second time that day, we sat in stunned silence, this time watching the plane circle Los Angeles, cable news anchors predicting disaster.

What happened? Well, according to the passengers on board, one of the smoothest landings they’d ever felt. You better believe the pilots were prepared for it. There’s also a specific evacuation for a nose-collapse, which the flight attendants would have done had it been necessary.

Ok, so now it’s time for you to learn more about flight disasters. And no I’m not suggesting that everyone enroll in flight school. There are number of sites online, but my favorite is AirDisaster.com. What have you got to lose besides your fear?

P.S. The only thing you have to fear is “the triple high-low chime.” That’s the captain telling the flight attendants to prepare for an emergency. I’ve heard it twice, but that’s another story for another time…

Read up on that time she realized she’d forgotten her passport on landing in Mexico; and listen up as she schools you on those overhead bins. Have a question for Gillian? Check out our Facebook page next week for the chance to submit your questions for her and our real-life flight attendant will answer them!

Photo credit: Airplane above the clouds via Shutterstock