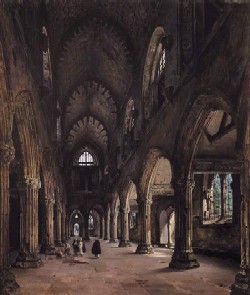 On the road with the Da Vinci Code in Scotland, where the trail takes us to Rosslyn…

All Things Grail Lead to Rosslyn

With a little help from Sir Isaac Newton, Langdon breaks the second cryptex code, after which he and Neveu journey to Rosslyn Chapel, Scotland’s most famous Templar temple, but what they find is not what they expect.

On Tour
Rosslyn Chapel. The pretty little U-shaped miners’ village of Roslin, with its rows of stone-built terraced cottages, is famous for the extraordinary Rosslyn Chapel. Conceived by Sir William Sinclair (circa 1404-80) and dedicated to St. Matthew in 1446, the chapel is outstanding for the quality and variety of the stone carving inside. Covering almost every square inch of stonework are human figures, animals, and plants. The chapel’s design called for a cruciform structure, but only the choir and parts of the east transept walls were completed.

Some believe the Rosslyn Chapel is where the Holy Grail is buried. Brown writes: "For centuries this stone chapel had echoed with whispers of the Holy Grail’s presence. The whispers had turned to shouts in recent decades when ground-penetrating radar revealed the presence of an astonishing structure beneath the chapel — a massive subterranean chamber. Not only did this deep vault dwarf the chapel atop it, but it appeared to have no entrance or exit. Archaeologists petitioned to begin blasting through the bedrock to reach the mysterious chamber, but the Rosslyn Trust expressly forbade any excavation of the sacred site."

Getting There: Neveu and Langdon drive to Roslin from Edinburgh. You can either fly to Edinburgh or take the train, then go by car, taking "Straiton Junction" A 701 to Penicuik/Peebles. Follow A 701 three miles and look for Roslin sign. Once in Roslin Village, look for signs to the chapel, which rests on a bluff.

Where to Stay: Roslin is a mere 8 miles outside Edinburgh, which has several fine hotels.

Getting Around: Edinburgh is easy to navigate by bicycle, bus, car, or taxi.