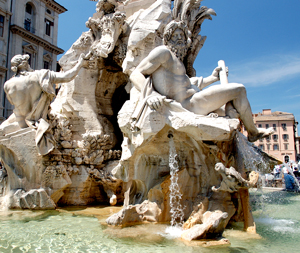 On the road with the Da Vinci Code in Rome, where the trail takes us to the Papal summer retreat…

Secret Meeting at the Vatican
After learning from the Vatican Council that a secret society, the Priory de Sion (headed by Jacques Saunière), has been making plans to uncover shocking news about Jesus, Opus Dei’s Bishop Manuel Aringarosa accepts a mission to quash the revelations. We first meet the bishop on an Alitalia night flight from New York to Rome, where, at a secret meeting of the Vatican Council, he will collect an important package. Although the action of The Da Vinci Code sidesteps the Vatican, the office of the Holy See weighs heavily on every page.

On Tour
Vatican City. The tiny walled city-state and capital of the Catholic Church draws millions of visitors every year to its wealth of treasures and spiritual monuments. You might go to the Vatican for its exceptional art holdings — Michelangelo’s frescoes, rare archaeological marbles, and Bernini’s statues — or to immerse yourself in the unique and grandiose architecture of St. Peter’s square. Or you might go in pilgrimage, spiritual or otherwise, to the most overwhelming architectural achievement of the Renaissance and the seat of world Catholicism: St. Peter’s Basilica. In between the sacred and the profane lie sights for every taste and inclination: magnificent rooms with elaborate frescoes by Raphael, sculptures such as the Apollo Belvedere and the Laocoön, frescoes by Fra Angelico, paintings by Giotto and Leonardo, and the celebrated ceiling of the Sistine Chapel. The power that emerged as the Rome of the emperors declined — the Church — gave impetus to a profusion of artistic expression and shaped the destiny of the city for a thousand years.

The massive walls surrounding Vatican City strongly underscore the fact that this is an independent, sovereign state. Vatican City covers 108 acres on a hill west of the Tiber; within the walls, about 1,000 people live as residents. The Vatican has its own daily newspaper (L’Osservatore Romano), issues its own stamps, mints its own coins, and has its own postal system. Within its territory are administrative and foreign offices, a pharmacy, banks, a print shop, a mosaic school and art restoration institute, a tiny train station, a supermarket, a small department store, and several gas stations.

Castel Gandolfo
Upon arrival in Rome, Bishop Aringarosa is picked up by a Vatican attaché, who, in keeping with the clandestine nature of the operation, takes him not to the Vatican but to the papal summer retreat in nearby Castel Gandolfo.

On Tour
Castel Gandolfo. A small town in the Alban Hills outside Rome, Castel Gandolfo overlooks pristine Lake Albano. The town is an ideal getaway for Romans seeking escape from their city’s hustle and bustle, and indeed popes since the 17th century have been doing just that. From anywhere in town the Pontiff’s Palace can be seen rising above the rooftops and trees. Built in 1626 by architect Carlo Maderno, the palace on one side has expansive and lush gardens that frame spectacular views of the lake and the Tyrrhenian Sea on the horizon. A square built in front of the palace in 1929 permits easier viewing of the pope on special occasions and provides better access to the nearby Church of Saint Thomas of Villanova, built in the 17th century by Gianlorenzo Bernini. The Pontiff’s Palace is off-limits to the public, but the gardens can be toured.

Getting There: Bishop Aringarosa jets into Rome’s principal gateway, Leonardo da Vinci Airport (06/65951; www.adr.it), commonly known by the name of its location, Fiumicino (FCO). You should too. The airport lies 30 km (19 mi) southwest of the city. There’s a direct train link with downtown Rome.

Where to Stay: There are many hotels near the Vatican and elsewhere in the city.

Getting Around: The Vatican’s entrance on Viale Vaticano can be reached by Bus 49, which stops right in front. Or you can take Bus 81 or Tram 19 and walk. Another option is to take a Metro line A train to the Via Cipro-Musei Vaticani stop. Castel Gandolfo is a 30-minute train ride from Rome’s Termini Station. By car, the drive is 20 minutes; take the A-1 Highway Roma Nord heading toward the Grande Raccordo Anulare (Great Ring Road); 20 kilometers after the toll booth, enter the Grande Raccordo Anulare heading toward the airport. Get off at Exit 23 (Via Appia) and follow the signs.

Suggested Route: Tour the Vatican, and then head out to Castel Gandolfo.