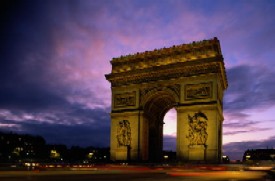 On the road with the Da Vinci Code in Paris: It’s a Shocker at the Louvre…

Shocking Night at the Ritz
After he gives a talk at the American University of Paris on mysterious runes at Chartres Cathedral, Robert Langdon returns to the famous Ritz hotel for a good night’s sleep. A late-night visit from the police inspector Bezu Fache leaves him shocked: the man with whom he was supposed to meet earlier that day, Jacques Saunière, has been murdered.

On Tour
Ritz Paris. Ever since César Ritz opened the doors of his hotel in 1898, the mere name of this venerable institution has become synonymous with luxury. You could easily spend days here without even venturing onto the magnificent place Vendôme. There’s the famed Ritz Escoffier cooking school, where you can learn the finer points of gâteaux; the Hemingway Bar, where Colin Field reigns as a world-ranked bartender; and the Greek-temple-ish subterranean swimming pool. Guest rooms match this level of luxe; even in the “humbler” spaces, modern conveniences are cleverly camouflaged among the gleaming mirrors, chandeliers, and antiques. The most palatial suites bear the names of famous Ritz residents: the Coco Chanel, the Prince of Wales, and the Elton John.
ADDRESS: 15 place Vendôme.
NEIGHBORHOOD: Louvre/Tuileries.
MÉTRO: Opéra.

Prime Suspect
Jacques Saunière’s body is discovered in the Louvre’s Denon Wing, not far from two of Leonardo da Vinci’s greatest works. Near the body, the police have found an enigmatic message. With the help of Saunière’s granddaughter, talented cryptologist Sophie Neveu, Langdon unravels the message: a series of clues that will lead the two on a quest for the Holy Grail.

On Tour
Denon Wing, the Louvre. The Italian painting collection begins at the western end of the Denon Wing. Some rooms here are slowly being remodeled; the Mona Lisa is usually in Salle 3, but through 2005 she is in Salle 13. Seek out the paintings by the original Renaissance man, painter-engineer-inventor-anatomist Leonardo da Vinci (1452-1519). His enigmatic, androgynous St-John the Baptist hangs in Salle 5, along with more overtly religious works, such as the 1483 Virgin of the Rocks, with the harmonious pyramidal arrangement of its figures.

Continue down the corridor, past masterworks by Raphael and Giuseppe Arcimboldo; you’ll soon find yourself in the midst of a crowd, approaching the Mona Lisa (properly, La Gioconda, known as La Joconde in French). With all the guards and barriers, it feels as if you’re visiting a holy relic, and in some ways you are. This small painting was Leonardo’s favorite. It has belonged to innumerable French rulers since its acquisition by François I, including Napoléon, who kept it on his bedroom wall. The wife of one Francesco del Giocondo, a Florentine millionaire, was 24 when she sat for this painting in 1503. (Some historians believe the portrait was actually painted after her death, and Langdon has an altogether different theory about the origins of the image.) Either way, she has become immortal through Leonardo’s ingenious sfumato technique, which combines glowing detail with soft, depth-filled brushwork.
ADDRESS: Palais du Louvre.
NEIGHBORHOOD: Louvre/Tuileries.
MÉTRO: Palais-Royal.

Convenient Decoy
Neveu and Langdon flee the Louvre in her SmartCar (!), heading first to the rue de Rivoli and then down the Champs-Élysées to the Arc de Triomphe. Heading north out of the rotary, the car makes a hard right down boulevard Malesherbes and makes a beeline for Gare Saint-Lazare, where Neveu’s purchase of two train tickets to Lille provides a convenient decoy.

On Tour
Champs-Élysées. Marcel Proust lovingly described the elegance of the world’s most famous avenue, the Champs-Élysées, during its belle epoque heyday, when its cobblestones resounded to the clatter of horses and carriages. Today, despite the constant surge of cars and the influx of chain shops, there’s still a certain je ne sais quoi about strolling up Les Champs, especially at dusk, as the refurbished streetlamps are just coming on. The café tables are always good for people-watching, while the cinemas, nightclubs, and late-hour shoppers ensure the parade continues well into the night. Originally cattle-grazing land, the 2-km (1¼-mile) Champs-Élysées was laid out in the 1660s by the landscape gardener André Le Nôtre as a park sweeping away from the Tuileries. Traces of its green origins remain in the lower section of the avenue, where elegant 19th-century park pavilions house the historic restaurants Ledoyen, Laurent, and Le Pavillon Élysées.
NEIGHBORHOOD: Champs-Élysées.
MÉTRO: Champs-Élysées-Clemenceau, Franklin-D.-Roosevelt, George V, Étoile.

Gare Saint-Lazare. The beaux arts-style Gare Saint-Lazare was built in the late 1880s to accommodate travelers to Paris’s Universal Expo of 1889, for which the Eiffel Tower was also erected. Though the station now fulfills 21st-century transportation needs, the grandeur of the architecture (which includes some buildings from the 1840s and 1850s) remains. In the right light you can almost imagine the scene that inspired Monet’s 1877 painting Gare Saint-Lazare.
ADDRESS: 108 rue Saint-Lazare.
NEIGHBORHOOD: Montmartre.
MÉTRO: Gare Saint-Lazare.

Help in the Quest
Having lost the police, Neveu and Langdon head in a cab to Paris’s west side, traveling via the Bois de Boulogne’s Allée de Longchamp to the Depository Bank of Zurich, where a deciphered message from Saunière tells them they’ll find a “cryptex” (a device whose code must be broken to reveal its contents) that will help in their quest for the Grail. The fictional Depository Bank of Zurich is said to be “adjacent to the Roland Garros tennis stadium,” which is in the park’s southern section. (The bank is said to be on rue Haxo near the stadium; the real-life rue Haxo is on the eastern edge of Paris near the Cimetière du Père-Lachaise.)

On Tour
Bois de Boulogne. Until Napoléon III’s time, the 2,200-acre Bois de Boulogne was a wild woods. But the brilliant landscape architect Jean-Charles Alphand, a protégé of Baron Haussman (the prefect who oversaw the reconstruction of Paris in the 1850s and 1860s), created a series of elegant promenades, romantic lakes, and formal playgrounds based on the London-style parks the emperor admired. Le Bois became an immediate hit with Parisians and remains popular today with rowers, joggers, walkers, riders, picnickers, and lovers. Parisian style and elegance are on full display at the French Open tennis tournament, held in late May at the beautiful Roland Garros stadium. The park becomes a distinctly adult playground after dark, especially along sections of Allée de Longchamp, when prostitutes of all genders come prowling for clients.
ADDRESS: Main entrance at bottom of av. Foch.
NEIGHBORHOOD: Bois de Boulogne.
MÉTRO: Porte Maillot, Porte Dauphine, Porte d’Auteuil (also Bus 244).

A Monk Visits Saint-Sulpice
An albino monk-assassin connected with Opus Dei pays a visit to Saint-Sulpice, where he searches for a keystone believed to unlock the secret of the Grail. The sole occupant of the church, Sister Sandrine, watches the monk from a distance, but her phone call for help is cut short.

On Tour
Saint-Sulpice. Despite the presence of two magnificent Delacroix frescoes, Jacob Wrestling with the Angel and Heliodorus Driven from the Temple, the interior of Saint-Sulpice is oddly impersonal. Dubbed the Cathedral of the Rive Gauche, this enormous 17th-century church has entertained some unlikely christenings — those of the Marquis de Sade and the poet Charles Baudelaire, for instance — and the nuptials of the irreverent wordsmith Victor Hugo. The 18th-century facade was never finished, and its unequal towers add a playful touch to an otherwise sober design. Near the middle of the nave on the right side, you can locate one end of the Rose Line near a stone statue with a Latin inscription. The Rose Line, a narrow brass strip, marks the original zero-longitude line, which passed through Paris before being moved to Greenwich, England. The monk uses the line as a reference point in his quest for the Holy Grail. You can retrace his path from the stone statue north across the nave and transept to an obelisk next to the statue of St Peter. (The enormous organ mentioned in the book is in a rear chapel.)
ADDRESS: place Saint-Sulpice.
NEIGHBORHOOD: Saint-Germain-des-Prés.
MÉTRO: Saint-Sulpice.

Château Villette
Unable to break the code that will open the cryptex and reveal the secrets of the Grail, Neveu and Langdon turn to art historian Sir Leigh Teabing for help. Holed up in the splendid 17th-century Château Villette with a ne’er-do-well manservant, Teabing is more than willing to help.

On Tour
Château Villette. A mere 30 minutes from Paris, near the Château de Versailles, sits the regal Château Villette, laid out on a 240-acre spread in 1668 by architect Francois Mansart. Built for the Count of Aufflay, Louis XIV’s ambassador to Venice, the château is not open to the public. The famous gardens surrounding the château were designed by André Le Nôtre, mastermind of the gardens at Versailles. The two-hour Da Vinci Code tour is no longer offered. For information about multi-day paackages, see www.frenchvacation.com.

Getting There: The Da Vinci Code being fiction, some characters simply find themselves in Paris, and one of them is supposed to land at Charles de Gaulle airport but ends up not doing so. For we mere mortals, commercial aviation must suffice.

Where to Stay: At the Ritz, of course. Pinching euros? Check out these other Louvre/Tuileries hotels.

Getting Around: All the Parisian settings mentioned above, except Château Villette, are accessible via the métro.

Suggested Route: Start at the Ritz, pausing first to appreciate the grace and serenity of the octagonal place Vendôme. With its double necklace of ornate 19th-century-style streetlamps, the area surrounding the Ritz is especially striking at night. From here, take the métro (Opéra to Palais-Royal) or walk to the Louvre.

In the Epilogue, Dan Brown describes a route to the Louvre that works fine by auto, but for a more scenic stroll make a detour onto rue Saint-Honoré, the sophisticated artery of the rich and class-conscious 1st Arrondissement. To get to rue Saint-Honoré from place Vendôme, head south on rue de Castiglione and make a quick right. Au courant boutiques like Colette line rue Saint-Honoré. At place André Malraux, make a right turn on rue Richelieu as it pours onto the rue de Rivoli; cross this last street and enter the Louvre via the arched access to the Court Napoléon, where I.M. Pei’s pyramid is situated.

From the Louvre, head south into the Saint-Germain-des-Prés neighborhood to place Saint-Sulpice and its namesake church (Métro: Palais-Royal to Saint-Sulpice). Should you come across an albino monk, keep your distance. It’s a walk of more than 3 miles from the church to the Champs-Élysées and the Arc de Triomphe, so you might want to take the métro (Saint-Sulpice to Étoile). The Bois de Bologne is just a bit west of here, and the supposed location of the Depository Bank of Zurich is to the south. If you take the métro from the Porte d’Auteuil subway station to Gare Saint-Lazare, you’ll be tracing underground the route Sophie takes to the train station.