San Francisco is a city that seems to reveal itself all at once. After all, the charms of the sea lions at Fisherman’s Wharf and the arts and culture hot spots South of Market are all hard to overlook. But there’s a whole other side of San Francisco that most visitors — and even many locals — don’t know. This unknown side is edgy, interesting, and sometimes, just plain weird.

Loose Living
The Saloon (1232 Grant Avenue) is the oldest bar in the city. Built in the 1860s, this San Francisco establishment was saved from the raging fires of the 1906 earthquake by local men who’d cherished it dearly — at the time, it was a bordello. Today it’s an unpretentious hot spot for some of the best jazz in the city. 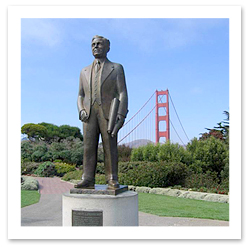 Megalomania!
Golden Gate Bridge architect Joseph Strauss nearly went mad trying to minimize the contributions of the colleagues who helped him design the 1.2-mile span. During its construction, Strauss had a nervous breakdown and divorced his wife to marry a young singer. Nearly a year after the bridge opened, Strauss died of a stroke in Arizona. His enemies tried to derail the placement of his statue but they were defeated and his likeness now stands — back to the Golden Gate. (photo, right)

Secret Gardens
Many times the rooftop gardens that crown many of the Financial District’s buildings are free and open to all. But nobody seems to know about them. San Francisco City Guides is a non-profit, volunteer-run organization that gives free tours year-round, and their City Scapes and Public Places tour takes visitors to the best secret gardens downtown has to offer. This is just one of the many tours the organization offers.

Born of the Gold Rush
When riding a cable car, keep in mind that they were introduced to the city during the Gold Rush era by Andrew Hallidie, who developed a system of steel rope and pulleys to make extracting precious metal from them the hills a little easier. After witnessing a horrific accident when a horse-drawn cart couldn’t make it up a San Francisco hill, Hallidie realized he could apply his mining innovations to safely moving people around San Francisco. 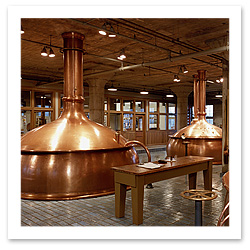 Hometown Brew
For beer lovers, Anchor Steam Brewery, in Potrero Hill, gives free weekday tours that end with a tasting of the many varieties of San Francisco’s hometown brew. Reservations for the tour, which are required, should be booked well in advance as the tour is very popular. Toronado (547 Haight Street), a bar in the Lower Haight, draws beer lovers from around the country with 50 beers on tap and another 75 beers by the bottle. Just don’t ask for a Bud. Happy hour is one of the best in the city, and it lasts from 11:30 a.m.-6 p.m. daily. Most beers are $2.50 a pint. (photo, right)

Wine Bar Firsts
Wine lovers should visit the wine bar of the future, VinoVenue. The first completely self-serve/automated wine bar in the U.S., this ultra-modern South of Market destination dispenses nearly 100 wines from sleek machines imported from Italy. The Financial District’s London Wine Bar (415 Sansome Street), despite its misleading name, was the first and only wine bar in the United States when it opened in 1974.

Jaunty Jackinapes
Jack’s, rechristened Jeanty at Jack’s, is the oldest restaurant in the city, and is where Alfred Hitchcock and a friend supposedly invented the mimosa after a hard night of drinking. Some sources peg the drink to the Ritz Hotel, Paris, but the downtown hangout was undoubtedly a favorite for high-rollers. At one time the establishment reputedly had private rooms on the second floor so that gentlemen could have alone time with their female “friends.” 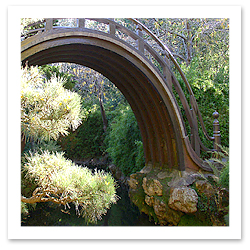 A Frisco Original
Despite all common sense, it’s not true that fortune cookies were invented in China. In fact, they were invented in 1909 at the Japanese Tea Garden in Golden Gate Park. Makoto Hagiwara, a wealthy San Franciscan who loved working in Zen gardens, needed something to serve with tea and a sweet star was born. (photo, right)

Eastward Ho!
The eastern edge of the Financial District used to be under water. Front Street was the edge of downtown but sunken and abandoned ships were used in a land reclamation project in the 1850s, allowing for commercial expansion toward the East Bay. Few remnants of these old ships remain, with the exception of The Old Ship Saloon (298 Pacific Avenue), a bar and restaurant built around the remains of an antique wooden vessel. Look for the building with the nose of an old sailing vessel sticking out of a wall.