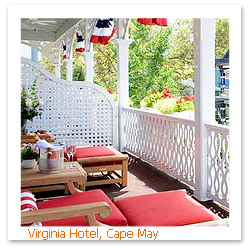 For Northeasterners, the lazy days of summer are best spent at “the shore” in one of the many small beach towns along the East Coast. Though the crowds can get thick, the vibe remains friendly and laid-back. Here are a few favorites — starting with the jewel of the Jersey Shore and moving north to Maine’s coast.

The southernmost point in New Jersey, believed to be the oldest beachfront resort in the country, is a National Historic Landmark. Cape May today retains more than 600 Victorian-era houses, built from the mid-1800s to the early 1900s. Many have found new life as B&Bs, inns, and restaurants.
Eating Out: In a town with no shortage of good restaurants, Washington Inn reigns as the spot for a special dinner at the shore.
Sleeping In: Forget frumpy. For classy lodging, book a room well in advance at the Virginia Hotel.
Tip: The Cape May “diamonds” — pebbles of pure, rounded quartz — that wash up on the shore of Sunset Beach (within walking distance from the Cape May Lighthouse) are yours for the taking.

Like much of Long Island’s Hamptons, Southampton is a magnet for affluent summer breakers from “the city” (New York, that is). The beaches, like the people that gather on them, are beautiful.
Eating Out: The small village of Water Mill, one mile east of Southampton, is proud of its star restaurant, Mirko’s.
Sleeping In: The Hamptons are all about splurging — a stay at The Inn at Box Farm is a worthwhile one.
Tip: For a fee, you can stretch out on Cooper’s Beach, studying the sea in one direction and historic mansions — including Calvin Klein’s massive manse — in the other. 268 Meadow Lane. 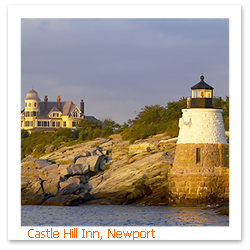 Larger than most harbor towns, Newport is a haven for recreational sailors. For those not arriving by water, a boat tour of the harbor is a great way to get your feet wet.
Eating Out: Enjoy fine dining in a garage at Asterisk.
Sleeping In: The panoramic views are almost as expansive as the list of amenities on offer at Castle Hill Inn and Resort.
Tip: Easton’s Beach (also called First Beach) is the beginning of the Cliff Walk, a spectacular 3 1/2-mile path, which runs south along Newport’s cliffs to Bailey’s Beach. The promenade has views of sumptuous mansions on one side and the rocky coastline on the other.

Twelve long miles of windswept road, aptly named the Napeague Stretch, separate Montauk from the Hamptons. Surrounded by water on three sides, Montauk is known for its distinct natural beauty and rustic, laid-back vibe.
Eating Out: Sidle up to the bar at Shagwong Tavern for something refreshing — on a busy night you’ll have to wait your turn to savor its delectable seafood fare.
Sleeping In: Bigger is better at the Montauk Manor.
Tip: The Montauk Trolley traverses the sights of Montauk—the village, the lighthouse, the harbor, and several parks — on 90 minute tours from Memorial Day weekend through Columbus Day. Same-day-ticket holders are allowed all-day boarding privileges (15 stops), which makes this a great way to get around. Tours begin at the Chamber of Commerce, Main Street across from the village green. 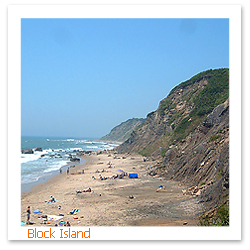 Well-preserved Block Island, 12 miles off Rhode Island’s Coast, boats 17 miles of sandy beaches. The Old Harbor area is the island’s only village and visitors will find the majority of the island’s inns and hotels here.
Eating Out: For something casual, head to Finn’s, a local institution. If you’re seeking something more formal, Eli’s serves up delectable Italian.
Sleeping In: Guests can expect elaborate breakfasts and immaculate grounds at the Atlantic Inn.
Tip: The Greenway, a well-maintained trail system, meanders across the island, but some of the best hikes are along the beaches. You can hike around the entire island in about eight hours.

Once a well-to-do whaling port, Martha’s Vineyard’s Edgartown has managed to preserve the elegance of that wealthy era. Lining the streets are 18th- and 19th- century sea captains’ houses, many painted white with black shutters, set among well-manicured gardens and lawns.
Eating Out: For a special evening out, head to Alchemy for upscale French fare.
Sleeping In: Winnetu Inn and Resorts is a top hotel on the island for both couples and families.
Tip: While Edgartown’s South Beach reigns as the town’s most popular sandy strip, sunbathers in search of a little peace and quiet should head to Little Beach. From here you can look across and see the lighthouse at Cape Poge, at the northern tip of Chappaquiddick. 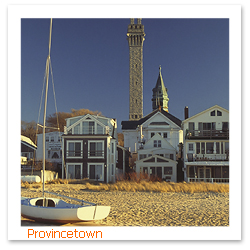 Cape Cod’s smallest town, Provincetown is a place of liberating creativity and substantial diversity. In the busy downtown, Portuguese-American fishermen mix with painters, poets, writers, whale-watching families, and gay and lesbian residents and visitors.
Eating Out: Re-fuel from an afternoon walk at Clem & Ursie’s, a local favorite for laid-back dining—there are plenty of seafood favorites to go around.
Sleeping In: With fireplaces and whirlpool tubs in some rooms and an on-site full service spa, the Crowne Pointe Historic Inn makes for one of Provincetown’s most refined stays.
Tip: Race Point Beach, one of the Cape Cod National Seashore beaches in Provincetown, has a wide swath of sand stretching far off into the distance around the point and Coast Guard station. Because of its position on a point facing north, the beach gets sun all day long, whereas the east coast beaches get fullest sun early in the day.

The center of island activity, just as it has been since the early 1700s, Nantucket Town on the island of Nantucket consists of only a few square blocks of mostly historical buildings, lovingly restored inns, and boutiques and galleries leading up from the pretty harbor and waterfront, where the ferries dock.
Eating Out: Locals and visitors line-up outside of Black-Eyed Susan’s for a chance to sample a menu that straddles the globe.
Sleeping In: A night’s rest can be pretty pricey here; Seven Sea Street is a particularly good value.
Tip: The Steamship Authority runs car-and-passenger ferries to Nantucket year-round. The trip takes just over 2 hours. If you plan to bring a car in the summer or weekends in the fall, you must have a reservation. Book as far ahead as possible. 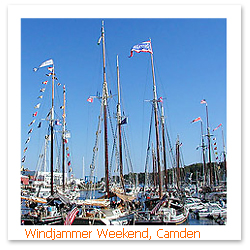 Camden, Maine
More than any other town along the Penobscot Bay, Camden is the perfect picture-postcard of a Maine coastal village. Exposed as such, the tiny town is uber-popular — don’t expect to be savoring that lobster roll down by the harbor solo.
Eating Out: Cappy’s Chowder House is a local institution; a bowl of “chowdah” is an essential order.
Sleeping In: Check-in to Norumbega Inn, Maine’s most photographed piece of real estate.
Tip: One of the town’s biggest and most colorful annual events, Windjammer Weekend is the single largest gathering of windjammer ships in the world.