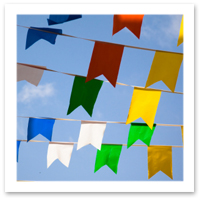 Several years ago, I awakened on a June Sunday in Spello to discover that its streets had been transformed into vibrant tapestries made entirely of petals.

During the annual Infiorata (flowering) for the feast of Corpus Christi (Holy Eucharist), the townspeople of this Umbrian hill town work through the night to create biblical scenes and reproductions of masterpieces by artists like Michelangelo and Raphael. At noon, the local bishop carries the communion host in a solemn procession along the carpet of flowers. By late afternoon, after thousands of admirers stroll through the tiny town, all that lingers ist the sweet scent of blossoms in the air. (This year’s Infiorata is June 14.)

Throughout the year, la festa (the party) provides a delightful glimpse into Italy’s history and culture. Everything from a national holiday (festa nazionale) to a village saint’s day to a harvest, whether of wheat, olives, or grapes, is a good reason for festevolezza (rejoicing), usually with copious quantities of special foods and lively crowds.

As Italians say, “Quando e’ festa, e’ festa!” (“When it’s a party, party!”) If you’re heading to Italy in the coming months, you might consider incorporating some of these festivities into your itinerary.

The stony, silent town of Gubbio, in Umbria, explodes into frenzied excitement every year during the “Race of Candles.” On this day, three teams of men run up and down its steep streets carrying Ceri, gigantic wooden constructions that each weigh about a thousand pounds and bear a statue of a saint on top. The Ceri and the Corsa dei Matti (Race of the Crazy Ones, as it’s nicknamed), may date back to the twelfth century, when Gubbio was miraculously spared from defeat at the hands of Frederick Barbarossa. Its citizens credited Sant ‘Ubaldo, who died on May 16, 1160, for its salvation, and the town has held a ceremony on the eve of his death since the Middle Ages. No one knows the exact origins of the Ceri, which are hoisted aloft by teams of twenty men who jog so fast that the saints on top appear to be running. The celebration culminates with La Tavola Bona, a banquet for 700 people, including the “crazy” Ceriaioli or candle-bearers.

We never miss this celebration of St. Erasmus, the patron saint of our adopted hometown on the western coast of Tuscany. A carnival sets up rides and games along the picturesque port for several days, and there are concerts, foot races, and sailing regattas. The high point is a religious procession in which the local pastor carries the saint’s statue out to sea. After the saint’s miraculous re-emergence from the waters, a parade of lighted boats files back into port. From our vantage point on a hill above the town, the fireworks display that follows the boat procession seems more breath-taking every year.

The volcanic soil around Lake Nemi, south of Rome, produces strawberries renowned for their sweetness and flavor, including the scrumptious fragoline di bosco (wild strawberries). At this annual celebration of strawberry season, women dressed in rustic costumes of bygone days sell fresh-picked berries in a multitude of ways. You can find strawberries with fresh cream or ice cream, strawberries in pancakes, strawberry milk shakes and liqueurs, and many other strawberry treats.

Each year the residents of Nola, a town in Campania, celebrate the fifth-century return of their local bishop after he liberated their men from enslavement in Africa. Nola’s citizens came out to welcome him with huge bouquets of lilies. For centuries the people substituted a very heavy candle, which they lit in the city piazza. Today’s gigli (lilies) have evolved into four-ton, 75-foot-high creations of wood and paper-mache paraded through the narrow streets by relays of 90 to 120 men as orchestras play and girls with tambourines dance.

Every year Sicilians give thanks to Santa Rosalia, Palermo’s patron saint. La Santuzza (the little saint), as she’s affectionately called, saved the town from the plague in 1624. The centerpiece of the elaborate celebrations has always been a triumphal cart–sometimes resembling an enormous fortress, sometimes a gigantic warship, once so opulent it was called “the little mountain of gold.” Today’s cart is a model of a seventeenth-century triumphal chariot, which looks, as author Carol Field puts it in Celebrating Italy, like “a great golden galleon set on a copper-colored seashell.” An entire velvet-costumed orchestra performs while six horses pull the whole thing along.

During the festivities Palermo drapes its streets in canopies of lights that shimmer like jewels. The major events are the procession of the triumphal cart to the sea on July 13; and a reenactment of the miracle of Santa Rosalia in the piazza of the Royal Palace on July 14, followed by a stunning gioco dei fuochi (play of fire) that draws thousands of spectators.

Count Opizzo Fieschi wanted to demonstrate his great love for his bride, Bianca dei Bianchi of Siena, when they wed on August 14, 1230. Naturally he ordered a cake made with 4,000 eggs, 3,300 pounds of sugar, and 3,300 pounds of flour, frosted with 110 pounds of almond paste. The thirty-foot-high cake, shared by everyone in the town, testified to the magnitude of his devotion.

Every year the wedding is reenacted, with a different young woman as the beautiful bride. There are fencing contests, flag-throwing demonstrations, concerts, a candlelight parade with knights in costume, and—of course—an immense wedding cake. Men in medieval costume tote the torta through the town and hand out lottery tickets—blue for men, pink for women, each pair with a matching code word. The men and women must compare cards with thousands of people to find their match and qualify for a slice of cake.

All over Italy, August 15

The ancient Romans honored various gods (particularly the goddess Diana), as well as the cycle of fertility and ripening, with month-long celebrations they called Feriae Augusti (Fairs of the Emperor Augustus). In our times these celebrations have become a national holiday, August 15th, and coincide with the day of the feast of the Assumption of Mary, the mother of Christ, into heaven. Ferragosto marks the height of the Italian vacation season.

The entire country shuts down to celebrate—or to indulge in dolce far niente (sweet doing nothing). Italy’s major cities empty at this time of year, and the expression “Ferragosto in città” (the August holiday in town) is used to describe a rather sad, lonely situation. On the other hand, if you’re staying in a seaside town or mountain retreat, you can join in low-key celebrations that typically include a church procession, a concert in the piazza, and fireworks.

This festival in the province of Pavia commemorates a gastronomic innovation: the invention of salami made with goose meat. The annual tribute features a Palio dell’Oca (goose race), along with street entertainment and stalls where you can taste other goose-based treats, including Italy’s version of a dish for which the French are famous: foie gras.

Dianne Hales is the author of a new book, “LA BELLA LINGUA: My Love Affair with Italian, the World’s Most Enchanting Language,” which celebrates Italy’s rich culture and effervescent language. She also has created a blog on Italian called Becoming Italian Word by Word and a website at www.becomingitalian.com.”