Deals Leila Najafi Attention West Coast: You Can Now Book Flights to Paris for as Little as $321
Home  >  News   >   The Boeing 787: the Smoothest Ride in the Sky

The Boeing 787: the Smoothest Ride in the Sky 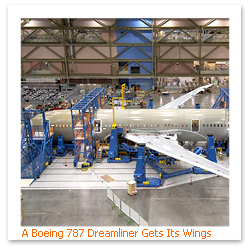 On Sunday, July 8, the first fully assembled 787 Dreamliner rolls off the production line at Boeing’s main plant in Everett, Washington. Hundreds of VIPs, reporters, and photographers are expected to attend the event, which will be broadcast in nine languages to viewers across the globe. Despite the fanfare, no one will be allowed on the plane and, Boeing tells us, no test flights have been scheduled for that day. Boeing is calling the event a “roll out,” and that’s pretty much all it is. After it’s “rolled out,” the plane will most likely be rolled away.

Anti-climactic? Yes. But it’s also superbly fitting. Boeing has more than 634 confirmed orders for the 787, with sales totaling in excess of $100 billion. That makes the Dreamliner the fastest-selling airplane in commercial aviation history. It hardly needs “press,” and there’s no end of buyers lining up to pay the plane’s $150 million price tag.

Still, while we understand Boeing’s desire to gloat (the 787 didn’t even drop in at this week’s high-profile Paris air show), curious types want to know what it is about this plane that has the airline industry in such a rapturous swoon.

For starters, the 787 promises fewer carbon emissions and quieter take offs and landings. And, unlike the big new Airbus A380, runways and airport terminals won’t need to be re-designed to accommodate it. The strongest selling point, at least from the airlines’ perspective, is the 787’s fuel efficiency. According to Boeing, the 787 uses 20 percent less fuel than any plane comparable in size. But if the plane is working miracles at the pump, it’s not because the designers skimped on seats and cargo space — the usual airline hat trick. On the contrary, the Dreamliner is fuel efficient because most of its body is made of a carbon-graphite and epoxy composite rather than aluminum.

Composites, which are lighter than metal and less susceptible to corrosion, are increasingly common today in airplane manufacturing. But the 787 is the first plane in commercial aviation history to use it so extensively. Where many planes today are 10- to 15-percent composite, a whopping 50 percent of the Dreamliner is composite, including major structural elements like the fuselage, wings, and tail. That makes it easily the lightest plane of its size in the sky. The plane’s lightweight frame, coupled with its high-powered twin engines and compact size (it holds less than 300 passengers), means it can easily fly up to 8,200 nautical miles at speeds approximating those of today’s biggest and fastest wide-body jets. No wonder buyers are lining up in record numbers. 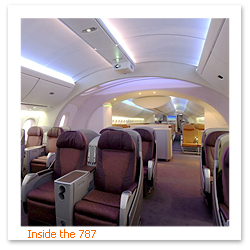 While Boeing bean counters are dancing a jig over the savings at the pump, consumers are gushing over some of the consumer friendly features of the 787, namely the plane’s gust-suppression technology, which is a fancy way of saying that the Dreamliner is the first plane in history that is likely to be turbulence-free. How is this possible, you ask? Sensors embedded throughout the skin of the plane detect minute changes in pressure caused by wind gusts. That information is then sent to a central processor that instantly adjusts wing flaps before the onset of the stomach-in-your-mouth inertial motion many of us experience when flying in choppy air.

The 787’s “smooth-ride technology,” as some are calling it, is the next generation of a system currently in use on the Boeing 777, but that system only adjusts for side-to-side pitching and rolling, not the up-and-down motions that make us reach for the little bag in the seat-back in front of us. The new technology aims to suppress both vertical and horizontal gusts.

Does it work? James Wallace, writing in the Seattle Post-Intelligencer, reveals that the system has been “flight-tested” on a 777 that Boeing borrowed from American Airlines, and the results were positive. Wallace himself experienced the technology in a Boeing flight simulator. “The stomach-turning up-and-down motions were dampened,” he wrote, “but there was more chop.” Much remains to be seen, or, well, felt.

In addition to smooth-ride technology, the 787 has plenty of other features that aim to please beleaguered 21st-century fliers. The cabin is 12 to 15 inches wider than the 767, lavatories are larger and wheelchair accessible, and advanced climate control should mitigate the dreaded dry-skin factor by keeping the cabin slightly more humid than normal. Passengers can expect larger windows (47 centimeters tall, says Boeing — that’s 65 percent bigger than windows on any commercial airplane), and noise-reduction technology guarantees a quieter ride for all. A fanciful touch is a “sky simulation” on the cabin ceiling that automatically adjusts to mimic daylight and nighttime conditions.

Finally, if you’re like us and you despair of watching hapless adults cramming everything they own into those tiny overhead bins, you’ll be pleased to know that the 787’s bins are big enough to hold at least four roll-aboard bags. But don’t use that as an excuse to run out and shop till you drop. You might be able to fit all the goodies on the plane, but getting them through airport security is another story.