7 Thrilling Adventures in the UAE

Known as a labyrinth of luxury high-rises and deluxe shopping malls, the United Arab Emirates might not seem like the ideal destination for the average outdoorsman. Take heed, adventure travelers; just because you chose to live it up at a seven star hotel, doesn’t mean you must eat caviar by the pool all day. (Or at least not every day.)

In the UAE, you can find yourself white knuckling the steering wheel of a Formula One racecar or careening down mile-high sand dunes in a SUV. Remember, almost anything is possible here, even snow skiing in the summer. So kick off your Jimmy Choos, strap on your hiking boots, and get ready to explore. 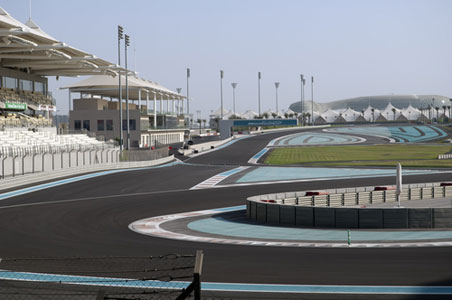 Fans of Formula One, it’s your turn to hop into the cockpit. Feel the wind in your hair as you grip the steering wheel of a professional racing car and zip around the world’s longest straight circuit. On Yas Island (23 miles east of Abu Dhabi), Yas Marina Circuit Race Track draws speed junkies who can either witness the thrill of Grand Prix performance from the stands or from the driver’s seat.

Go for a few laps around the track with a professionally trained driver in the passenger seat of an Aston Martin GT4 ($27). Or play co-pilot with a pro drag racer in a Chevy Camaro ($27)—you’ll reach 60 mph in 4.6 seconds. If you’re brave enough to get behind the wheel, test-drive a Formula Yas 3000 ($327). More casual drivers on a budget can stick to go-karting at Yas KartZone or take on the world’s fastest roller coaster Formula Rossa at Ferrari World, which reaches top speeds of 149 miles per hour. 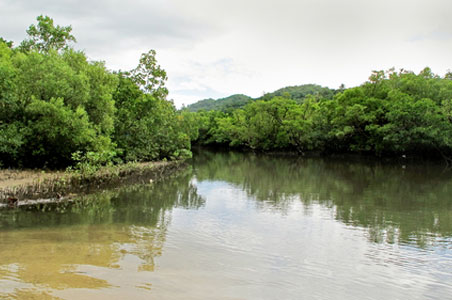 Stretching for five miles along Eastern Ring Road in Abu Dhabi, the Eastern Mangroves Lagoon National Park provides the habitat for 200 fish and 50 bird species. Venture into this wild frontier beyond the city with a kayak excursion led by the Anantara Eastern Mangroves Hotel. A local guide will take you around the mangroves and even throw in a few facts on local wildlife. The Anantara’s kayaking options include eco tours, island exploration, or fishing and each can also include a yoga session afterward at the hotel’s fitness center: a practice called “kayoga.”

If you’re looking for an urban escape, the Anantara Eastern Mangroves will suit the whims of the outdoor-bound adventurer. Set along the waterfront and overlooking the mangroves, the five-star luxury hotel has offered a number of outdoor excursions since its opening in June 2012. Other Anantara estates in the area like Qasr Al Sarab Desert Resort and the Desert Islands Resort and Spa also cater to adventurers, with custom desert safaris and island hopping excursions. 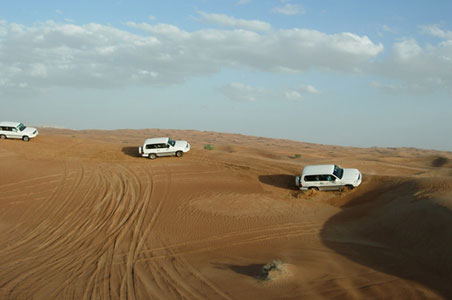 Looking for a stomach-dropping, heart-pumping adrenaline rush? Dare to try a bit of dune bashing—one of the Emirates’ most popular adventure activities. During dune bashing, certified guides power four-wheel drive SUVs straight up and over sand dunes, sometimes letting the wheels leave the ground. The most popular spot for dune bashing and other sand sports is the Rub’ al Khali desert known as the Empty Quarter. It’s the largest desert in the world, covering 250,000 square miles and boasting some 980 foot-tall dunes.

Cycle from City to Countryside 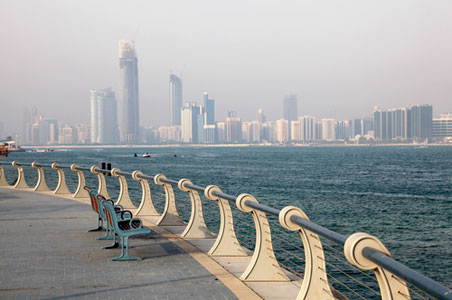 City-dwelling cyclists should head for the beach and cruise along Abu Dhabi’s northwestern shore by bicycle. Meandering 10 miles along the coastline from Al Khaleej Al Arabi Street to the Marina Village, Corniche Road offers designated bike paths with cycle rental stations along the way. The route also leads to the iconic Emirates Palace, a seven-star luxury hotel on most Abu Dhabi must-see lists. For more information, check out the Fun Ride Sports main cycle rental station located outside the Hilton Beach Club (Corniche Road West). Hire starts at five dollars per hour for adults and four dollars for children. Voucher booklets for 15 hours of cycling are also available for fifty-four dollars.

Check out this map of the Corniche Road route.

Cyclists who prefer more rugged terrain can opt for mountain biking in Shawka, a rocky desert landscape at the base of the Al Hajar Mountains (it is popular destination among local riders). Hot Cog Mountain Bike Club hosts weekly rides for advanced-level riders. 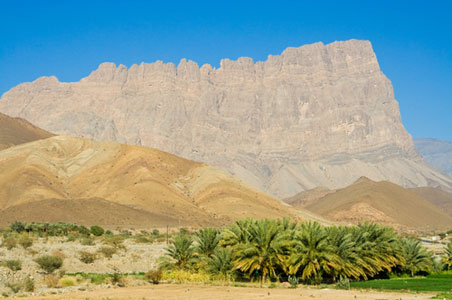 If the arid desert landscape summons your walking shoes, strap on your boots and head for Al Ain, a city 100 miles east of Abu Dhabi along the border of Oman. While there, hike the Al Hajar Mountains—the highest mountain range in the Eastern Arabian Peninsula; the central section of the range reaches 9,834 feet. Absolute Adventure organizes treks in the mountains, desert, and coastline of Oman and the UAE, especially to the Hajar Mountains. Excursions range from single to multiple-day hikes (camping gear included in the price). Beginners, for example, could choose a three-hour run along the Secret Staircase: a series of steps near Dibba Beach built by Pakistani goat herders who inhabit the peak of the climb.

After a long trek, unwind at the Green Mubazzarah (03 783 9555), a series of natural hot springs at the base of Jebel Hafeet Mountain. 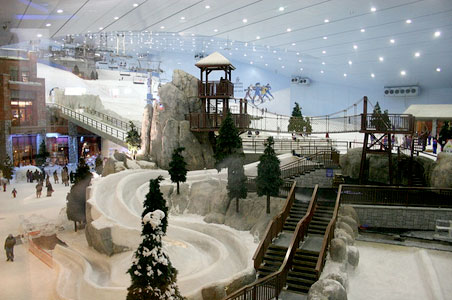 Skiing in a mall in a desert when it’s 110 degrees outside? Yes, it is possible. Forming part of Mall of the Emirates off Sheik Zayed Road, Ski Dubai is the Middle East’s first indoor ski resort and it boasts 242,187 square feet of year-round snow. Here, winter lovers can ski, snowboard, or go tobogganing down five different runs, each varying in skill level. Ski equipment and clothing are available for rent. The park also offers zany snow activities like a giant ball run, tube slides, and bobsledding. Prices vary; adult tickets sell for $240, which includes a lesson. 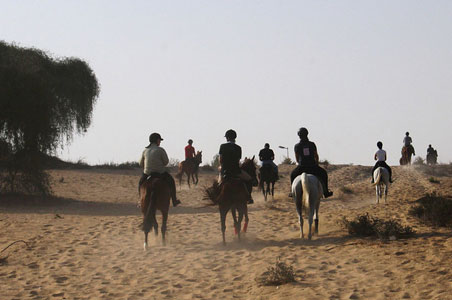 To escape the heat in the United Arab Emirates, it’s ski by day and ride by night. Imagine prancing around the Arabian sands on horse back by the light of a full moon. Mushrif Equestrian and Polo Club in Dubai organizes evening riding sessions every month according to the cycle of the full moon. Groups depart at 8 pm and ride for one and half hours through the dunes of Mushrif Park off Al Khawaneej Road ($82 per session).

For riders who prefer to practice their equestrian skills during the day, several companies offer desert excursions and riding lessons like the Al Jiyad Stables located at the Emirates Equestrian Centre in Dubai. The company, which specializes in endurance training, takes guests around the nearby Sieh Al-Salem nature reserve where Oryx, antelopes, and desert foxes roam.

The Anantara Desert Islands Resort and Spa also offers horseback riding around Sir Bani Yas Island (160 miles south of Abu Dhabi). The island is rich in wildlife as it is home to around 30 mammal species. The Anantara’s Royal Bay Ride takes riders on a two-hour journey along the island’s sandy beaches.