Got cabin fever? Just because the temperature is dropping doesn’t mean the outdoorsy fun has to stop. Take a page from these weird and wacky festivals around the country, and celebrate the snow. 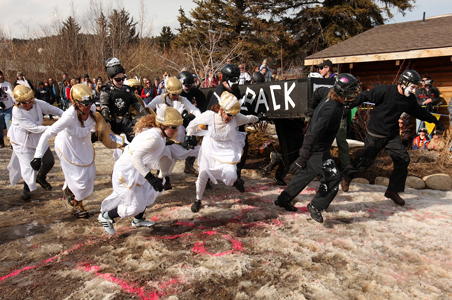 Grandpa Bredo Morstoel may have died of a heart condition in 1989, but that doesn’t stop him from living on (cryogenically, at least) in the artsy Rocky Mountain town of Nederland. Packed in 1,600 pounds of dry ice and kept cool at a steady 60 degrees, Grandpa Bredo is the inspiration behind the aptly-named—if slightly morbid—Frozen Dead Guy Days event. Each winter, the Colorado town celebrates good ole gramps with coffin races, a parade of hearses, a frozen T-shirt contest, snow "beach" volleyball, and other offbeat cold-weather activities.

What began as an attempt to break up the monotony of winter in the Adirondack wilderness has evolved into the longest-running event of its kind in the eastern U.S. The Saranac Lake Winter Carnival boasts run-of-the-mill winter sports like Nordic skiing and ice-skating, but also hosts off-the-wall competitions like ultimate arctic Frisbee and a women’s frying pan toss. Saranac Lake‘s annual themed parade (this year’s is "Celtic Carnival") is also not to be missed, but perhaps the biggest draw is the famed ice palace—a mammoth structure made with anywhere from 1,000 to 3,000 ice blocks, weighing up to 800 pounds each. 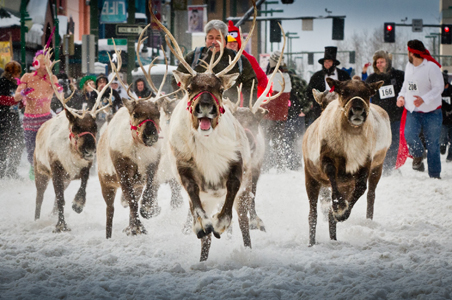 Winter can run long in Anchorage, with extra months of snow and freezing temperatures. That’s exactly why the first Fur Rendezvous was initiated back in 1935, to break up those long, cold winter months with sports, games, and even a torchlight parade. Today, "Rondy" has grown into a 10-day celebration of Alaskan life, featuring men’s snowshoe softball, a grand prix auto race, a "Running of the Reindeer" event, and even a Miss Rondy contest. The cornerstone of the festival is the World Championship Sled Dog Race, which attracts teams of sled dogs and mushers from all over the world.

Legend has it that Ullr, the Nordic god of snow, settled in northwest Montana, making his home on Big Mountain. But alas, there was no peace for Ullr and his queen, as they encountered a group of unruly yetis set upon kidnapping the queen. Luckily Ullr prevailed, and to pay homage to their winter king, the people of Whitefish created the Whitefish Winter Carnival, where they celebrate all things winter by parading down Main Street on skis, crafting ice sculptures, and even skijoring (where skiers are towed behind horses through a race course). But beware—a band of rogue yetis remains, perpetrating pranks throughout the town, still intent on kidnapping the snow queen. 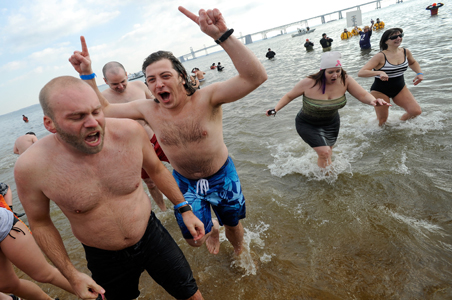 There are polar bear plunges—where people dive into frigid water in the middle of winter—all over the country, but Maryland‘s PlungeFest is the biggest of all. Attracting more than 25,000 plungers and spectators in 2013, this is the coolest (pun fully intended) way to raise money for charity. With proceeds benefitting Special Olympics Maryland, you’ve got a great excuse to take a dip in the Chesapeake Bay. If you’re not into frostbite, there’s also a carnival, giant sand sculptures, and live music to keep you entertained.

If you have a penchant for dressing up in costume and getting very, very cold, you’ll love Mammoth Mountain’s annual Pond Skim. At this beloved Californian event, skiers and snowboarders dress up in outlandish costumes—previous years have seen sumo wrestlers and superheroes—and straight line it across a 110-foot unfrozen pond. Some succeed, others fail, and a good time is had by all (or, at least most). 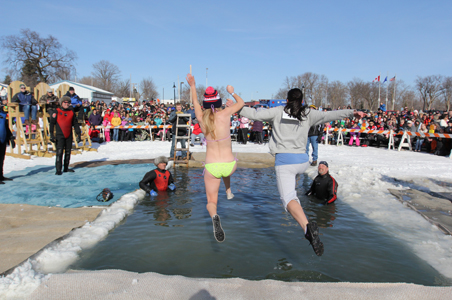 Some people head south to sun-drenched beaches for the winter months. The residents of Detroit Lakes, Minnesota, are not those people. They live for winter, creating Polar Fest as their love letter to all things frozen. They’ve crammed a week full of chilly fun, with quirky competitions and activities like frozen turkey bowling and an iced tee golf tournament. Best of all, Polar Fest is run by a group of dedicated citizen volunteers who are always looking for new activities, which means you can turn your snowy dreams into Polar Fest realities.