The 7 Most Inspiring Sights in the American Southwest

From blazing sunsets to gigantic caverns full of bats, here’s where to find the magic of the Southwest. 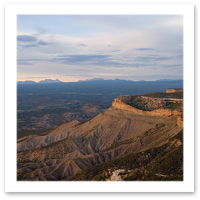 Unlike most national parks of the west, Mesa Verde earned its status from its rich cultural history rather than its geological treasures. President Theodore Roosevelt established it in 1906 as the first national park to “preserve the works of man.” The Ancestral Puebloan people, who lived in the region from roughly 600 to 1300, left behind more than 4,800 archaeological sites spread out over 80 square mi. Their ancient dwellings, set high into the sandstone cliffs, are the heart of the park.

The kivas (ceremonial chambers), petroglyphs, and will paintings will bring you face-to-face with the ancient traditions of the cultures that still thrive in this area—namely, the Hopi, Zuni, and Pueblo tribes.

For historical context, visit the Chapin Mesa Archaeological Museum, which tells the entire story of the cliff-dwelling people and gives as complete an understanding as possible of the Basket Maker and Ancestral Puebloan cultures.

If you can swing it, plan your visit to coincide with a ceremonial observance. Though you’ll need to set aside several hours (they never start on time) it’s worth the wait.

Be sure to catch the Millicent Rogers Museum, nearby, where more than 5,000 pieces of spectacular Native American and Hispanic art are on display. Jewelry and rare religious artifacts are highlights of the collection. 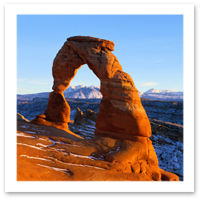 There’s nowhere else on Earth that looks like this. Balanced rocks teeter unthinkably on pedestals; sandstone arches—of which there are more than 2,000— frame the sky with peekaboo windows; and formations like the Three Penguins greet you at points throughout the 73,379-acre park. Far from a stereotypical beige-tone palette with the occasional cactus, the desert here is adorned with a rich tapestry of colors: red, orange, purple, pink, creamy ivory, deep chocolate, and even shades of turquoise. The Fiery Furnace burns like a wildfire at sunset, and acres of petrified sand dunes rise across the horizon.

A hike through the Fiery Furnace, a maze of rock walls and fins, is sure to make you fall in love with the desert and appreciate nature at its most spectacular.

However you spend the rest of your day, you have to have a picture of Delicate Arch at sunset. We’ll say no more. Just go there.

On the surface, Carlsbad Caverns National Park is deceptively normal—but all bets are off once visitors set foot in the elevator, which plunges 75 stories underground. The country beneath the surface is part silky darkness, part subterranean hallucination. The snaky, illuminated walkway seems less like a trail and more like a foray across the river Styx and into the Underworld. Within more than 14 football fields of subterranean space are hundreds of formations that alternately resemble cakes, soda straws, ocean waves, and the large, leering face of a mountain troll.

With a floor space equal to about 14 football fields, the Big Room is the underground focal point of Carlsbad Caverns, and provides some clues as to just how large the caverns really are. The chamber itself is so vast voices don’t echo far; the White House could fit in just one corner of the Big Room, and wouldn’t come close to grazing the 255-foot ceiling.

Be ready for all the bats! Cowboy Jim White discovered the caverns after noticing that a swirling smokestack of bats appeared there each morning and evening. White is long gone, but the 300,000-member bat colony is still here, snatching up 3 tons of bugs a night. Watch them leave at dusk from the amphitheater located near the park visitor center. 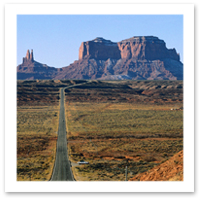 For generations, the Navajo have grown crops and herded sheep in Monument Valley, considered to be one of the most scenic and mesmerizing destinations in the Navajo Nation. Within Monument Valley lies the 30,000-acre Monument Valley Navajo Tribal Park, where eons of wind and rain have carved the mammoth red-sandstone monoliths into memorable formations. The monoliths, which jut hundreds of feet above the desert floor, stand on the horizon like sentinels, frozen in time and unencumbered by electric wires, telephone poles, or fences—a scene virtually unchanged for centuries. These are the very same nostalgic images so familiar to movie buffs who recall the early Western films of John Wayne.

Take a drive by the Mittens and Totem Pole formations.

It’s a bit of a drive from Monument Valley, but you’ll be close to the Four Corners Monument, purported to be the only point in the United States where four states meet: Arizona, New Mexico, Colorado, and Utah. We’ve heard a rumor that it’s in the wrong spot, but don’t let that bother you.

The nearly 84,000-acre Canyon de Chelly (pronounced d’shay) is one of the most spectacular natural wonders in the Southwest. On a smaller scale, it rivals the Grand Canyon for beauty. Its main gorges—the 26-mi-long Canyon de Chelly (“canyon in the rock”) and the adjoining 35-mi Canyon del Muerto (“canyon of the dead”)—comprise sheer, heavily eroded sandstone walls that rise over dramatic valleys.

Leave your fear of heights in the car, then go check out Spider Rock Overlook, where you have a view of Speaking Rock and Spider Rock plunging 1,000 feet to the canyon floor.

Consider staying at Thunderbird Lodge, in an ideal location within the national monument’s borders. It’s a good price and you can tours leave right from the hotel.

When it comes to the Grand Canyon, statistics don’t cut it—the only way to know if first-hand experience. While the former are impressive—the canyon measures in at an average width of 10 mi, length of 277 mi, and depth of a mile—they don’t truly prepare you for that first impression. Seeing the canyon for the first time is an astounding experience—one that’s hard to wrap your head around.

Talk about solitude. At Point Sublime you can camp within feet of the
canyon’s edge. Sunrises and sunsets are spectacular.

Try a mule ride! Reservations are essential and are accepted up to 23 months in advance, or you can check the waiting list for last-minute cancellations.