News Tina Charisma 'Regenerative Travel' Is the New Buzz Phrase, but What Does It Mean?
Home  >  News   >   7 Mistakes Not to Make When Dining Out with Kids

7 Mistakes Not to Make When Dining Out with Kids 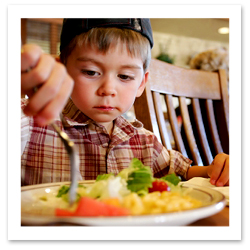 If a restaurant dispenses tiny packets of crayons enrobed in whimsical paper placemats, you’ve likely discovered a place that considers itself kid friendly. But is it a place you want to go? Deep in your heart you know it isn’t. And wherever you travel, you’re probably finding that the desirable places to eat aren’t necessarily clear about whether they’re kid friendly. Ultimately, though, showing your kids a good time isn’t the restaurant’s job — it’s yours. And believe it or not, you can do more than just survive a night out with your kids if you avoid these common blunders.

Mistake #1: Picking a place devoid of other kids

While you’re away, pick restaurants based in part on who else is eating there. Look for at least one other family with kids close in age to your own. If the crowd feels cold when you get there, walk. Unless your child’s perfectly still and silent (aka unconscious), she’ll likely want to go say hello to the other family. One of the easiest things to forget while on vacation is how much your kids miss their friends back home, and watching your daughter and her new friend chatter about tween stars or annoy the fish in the tank up front will remind you how those instant restaurant friendships can create your child’s fondest memories of a trip.

Mistake #2: Relying on the kids’ menu

A kids’ menu is often unimaginative and overpriced and what’s worse, its dishes often have no relationship to the good food on your menu. For a better meal, have the waiter halve one of the adult entrees or, better yet, order your child not one but several appetizers. This eliminates the drama of your child saying she doesn’t like the taste or smell of her entrée, increases the chances of her hitting upon something she likes, and opens her eyes to new flavors and combinations. The meal will be more satisfying and, potentially, less pricey.

While it’s tempting to introduce your kids to that regional dish you’ve been craving, don’t be recklessly experimental. For instance, shellfish — so simple and ubiquitous in New England, the Caribbean, and countless other family destinations, is a good candidate for an allergic reaction if your child has never tried it. If shellfish or some other ingredient is an unknown or a problem, also be mindful of more subtle manifestations. If your waiter’s unclear if the fish chowder is prepared with shellfish or if the kitchen fries the shrimp and clams separately from the french fries, insist he ask the chef. An allergic reaction may be limited to a single bout of vomiting, but do you really want your child’s defining memory of the trip to be, “Remember when I threw up?”

Trying to arrest a child’s meltdown as it’s happening is a lot like taking sea-sickness pills at the first sign of nausea: nice idea, but you’re about an hour too late. By no means beat yourself up for letting the day get away from you at that world-famous zoo or great-for-kids beach. But if you go this route, don’t mar a perfect day by expecting dinner to unfold calmly: anticipate that your kids might be starving or exhausted and know their time limits, especially if you insist on making every restaurant meal count — and it can. Just eat strategically. Since appetizers, theoretically, are supposed to be ready quickly, ordering several for all of you in lieu of entrees might be the best plan. And did you ever wonder why you see so many parents drinking coffee with their meals? It’s not just to shake off insanity; they already know they won’t be around to enjoy it later.

Mistake #5: Having their meals brought out first

Assuming your kids aren’t starving or exhausted, don’t have their dishes come out before yours. Many waiters will assume that you want the meals staggered and may not even ask your consent; be clear. If your kids dig in before you they’ll either be done or bored by the time your food arrives. Coloring books or handheld gaming devices may fill some of the time, but soon the relentless whining about why they shouldn’t have to watch you eat will begin to make sense, you’ll start to rush, and it’ll be your fault. You’ve earned the right to try your destination’s best food without indigestion, and even if having your family eat together at home is torture, they may surprise you and rise to the challenge while dining out. Especially if they ever hope to see that dessert tray arrive at your table.

Mistake #6: Not tasting their food first

This one may seem alarmist. I know I thought it was, at least until a trip to an elegant San Francisco restaurant, where my then four-year-old daughter bit into her kids’ meal and began tearing up and fanning her mouth. It seems the chef had mistakenly given her the same red pepper flake-laced meatballs he was serving to adults via the grown-up menu. This was a mistake on the part of the kitchen (they had meant to serve her from a milder batch). Regardless of how mild or uninteresting their food may look, vet it for weird spices, off-tastes, and extreme temperatures, at least until they’re ready to leave for college.

Mistake #7: Being a jerk when things go wrong

In the near future a restaurant is going to disappoint you. It might involve a waiter forgetting to put somebody’s order in, passing a steaming hot cup of coffee over the head of your infant son, splashing sauce on your sleeve, or exhibiting some other lapse in service, judgment, or coordination. When it happens, take a deep breath and think about what you’re going to say. Good restaurants want to make amends for their mistakes (hot pepper girl got a free sundae), and freaking out will only mortify your kids and make the rest of the meal uncomfortable. If your grandstanding is meant to prove to your kids that you’re not a pushover, great, we all get it, but consider a more measured approach that sets a good example and doesn’t amount to dinner theater for the rest of us. A quiet but firm attitude may not feel as good as outrage, but it might get you more satisfaction in the end. And your kids just may respect you for it.

Paul Eisenberg, a Fodor’s editorial director and father of three, has overpaid for kids menu meals, failed to anticipate many a meltdown, and given up on the possibility of sipping coffee after dinner. He previously wrote about mistakes to avoid on family road trips.