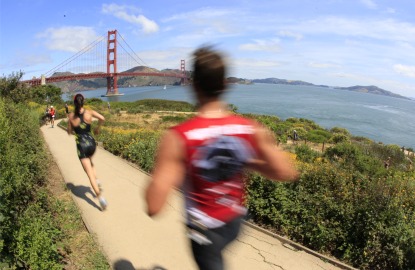 With warmer weather on its way (read: skimpier clothing both in the city and on the beach), motivate your fitness routine by signing up for a triathlon. For some, the swim-bike-run combination is more approachable than the usual marathon commitment, and these days, some vacationers plan an entire trip around the friendly competitions. Here, we’ve rounded up seven great triathlons in vacation-worthy destinations across the United States.

This triathlon classic brings some of the world’s best triathletes to the Bay area. The race offers scenic views of the city, including a course that takes participants past the Golden Gate Bridge. Plan your post-race indulgence dinner at Pete’s Barbeque (2399 Mission Street); the old-school joint is a crowd favorite.

Going the Distance: It’s an intense lineup: Start off with a 1.5-mile swim from Alcatraz Island in San Francisco Bay, followed by an 18-mile bike ride, and then an 8-mile run. There are several categories to compete in, including Professional/Elite and Open Relay.

Going the Distance: There are two course options. Those ready for a serious challenge can take on the Herbalife International race, featuring a 1.5-kilometer swim in the chilly Pacific Ocean, 40-kilometer bike ride, and 10-kilometer run atop blacktop and beach sand. The classic distance race is more approachable, with a half-mile ocean swim, 18-mile bike ride, and 4-mile run.

If hopping onto a bicycle saddle seat after a strenuous swim isn’t your thing, there are some races that modify the typical triathlon competition format. The popular Stroke & Stride series (it’s really a biathlon, but come vacation time, who’s counting?) in Boulder is entering its 11th season this summer, featuring a dunk in the Boulder Reservoir, followed by a scenic run over the reservoir dam. Plus, for nature-lovers, the area is known for a community devoted to outdoor activities like hiking in the Rockies, and farm-to-table cuisine (try the sophisticated fare at Salt Bistro).

Going the Distance: Beginners can choose the 750-meter swim, while advanced competitors can shoot for the 1,500-meter segment. The run is marked as a 5K.

When: Thursdays in June and July; plus, limited August dates

Speaking of alternative triathlons, Oahu has an innovative one situated on Kailua Beach Park: Their race substitutes paddleboarding for the usual cycling portion. Plus, the gorgeous beach and low-key neighborhood—where President Obama vacations each year—is excuse in itself to sign up. Just be sure to do so in advance as there is no registration on race day.

Going the Distance: An 800-meter swim is followed by a 2.5-mile run on the beach. The race finishes up with the option of 2 miles of stand-up paddleboarding, or 2.5 miles of one-man canoe paddling.

The beautiful canyons and desert of Moab are home to world-class mountain biking runs and some of the most unique landscapes around. Take advantage of its remote location by stopping by the 2nd annual Moab Triathlon Festival. The two-day affair offers several options for participants, including a full triathlon with mountain biking rather than the usual road cycling, and "sport distances" (or, half the distance of a full triathlon). There’s also a kiddie option for those with a budding triathlete.

Going the Distance: The full course requires a 1,500-meter swim in Ken’s Lake, a 15-mile technical trail ride through Steelbender trail, and a 6.8-mile run. For those not familiar with terrain riding, plan and train accordingly: The registration page recommends that contestants do test runs on the biking portion of the race.

Missed South by Southwest’s music extravaganza this year? There’s still time to catch live music with an adrenaline kick in Austin: Just sign up for the annual TriRock triathlon. In a perk that’s better than your usual iPod, bands line up along the course to play tunes during the race. Book a day early and check out the bonus extracurriculars like pre-race yoga classes at the Hyatt Regency, or the flat-tire clinic. And you won’t have to worry about planning activities post-race; there’s a raucous after-party for participants.

Going the Distance: The Olympic course is intimidating, with a 1,500-meter swim, 40-kilometer bike course, and a 10-kilometer run. The sprint course is more amateur-friendly, with the distances nearly halved.

So the water isn’t the warmest in the upper reaches of New England, but come September, when the annual Lobsterman Triathlon and Aquabike takes place in Freeport, Maine, the Atlantic has been baking all summer. (Traveling tip: September is also when the summer crowds dissipate, but the weather is still delightful.) Though the water can still be relatively cold, this popular race—it usually draws some 900 competitors each year—is also known for its post-race party, including—you guessed it—a lobster bake.

Going the Distance: A nearly one-mile swim in chilly Casco Bay (wet suits are required) is followed by a 40K bike ride and 10K run. Prefer to skip the run? Opt for the Aquabike version, which cuts out the third leg completely.