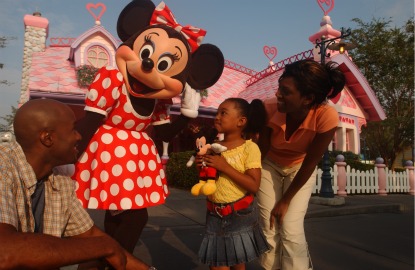 Most first time visitors to the Walt Disney World theme parks assume that there are two ways to meet the characters: stand in line for hours at the Magic Kingdom for twenty seconds with Mickey, or pay for a pricey character meal that must be booked months in advance. But characters can be found everywhere at Walt Disney World. Here are seven great, and somewhat unexpected, places to meet your favorite characters—in Orlando and beyond.

Mickey does meet and greets at all four theme parks but, surprisingly, the best spot to find him is Epcot. The meet and greet location in Future World next to Innoventions is a good spot to meet not only Mickey, but also Minnie, Donald, and Goofy, with Pluto and Chip & Dale, who all check in at alternating times. The best part is that guests only have to stand in line once to see all the "fab five"—and this line is indoors, with cartoons playing on TVs to help keep the kid entertained.

Not just for adults anymore, the World Showcase is a great place to meet characters. And the pictures could not be in a more perfect setting. Each country boasts a number of characters: for example, the Beast can be found with Belle in France, Mulan and Mushu are in China, and Snow White has her own wishing well in Germany.

3. Uncovering Pixar Characters in the Backlot

Those looking for Pixar characters need go no further than the Art of Animation at Disney’s Hollywood Studios. Characters from the latest Pixar movie can always be found here, as well as Mr. and Mrs. Incredible. Drop by the Backlot area to meet Lightening McQueen and Tow Mater.

4. Stumbling Upon Winnie the Pooh in the Animal Kingdom

Pooh and his friends hang out at Disney’s Animal Kingdom. Before crossing the bridge into Dinoland USA, look for the Character Landing spot on your right. This area is rarely crowded, and the characters look adorable in their safari gear!

The Fantasyland expansion is going to boast a new home for "StoryTime with Belle," an interactive show where Belle chooses members of the audience to help her act out her story. While not a typical meet and greet—no autographs or formal pictures are done. Belle’s StoryTime can be a truly memorable experience for the kids.

Older kids looking to meet Phineas and Ferb? These popular characters can only be found at Disney’s Hollywood Studios in the Backlot. Stop by Guest Relations when you enter the park and check exactly when they’ll be available to meet guests. Then get there at least ten minutes early.

7. Sailing Away with Characters at Sea

Many families take advantage of Disney’s land and sea packages, which give guests both time at the theme park and then on the Disney Cruise Line. And why waste precious time in the parks looking for characters when they’ll be sailing along with you? The ship offers many chances to meet the princesses, as well as take photos with the characters in their fancy "Captain’s Dinner" duds. And best of all: Captain Jack Sparrow is often sighted on Castaway Cay, Disney’s exclusive island. Where better to party with everybody’s favorite pirate?