News Tina Charisma 'Regenerative Travel' Is the New Buzz Phrase, but What Does It Mean?
Home  >  News   >   7 Must-Try Foods in New Delhi

To say there’s something for everyone in New Delhi would be an understatement. The Indian capital’s culture is every bit representative of its very unique and diverse history that includes northern Indian, Mughal, and British influences. The result is an extensive cuisine with dishes that put complementary flavors and textures at the forefront, making it challenging to whittle down your choices. We’ve tasted our way through them all (or most of them), and think these are the 7 to put at the top of your culinary wishlist. 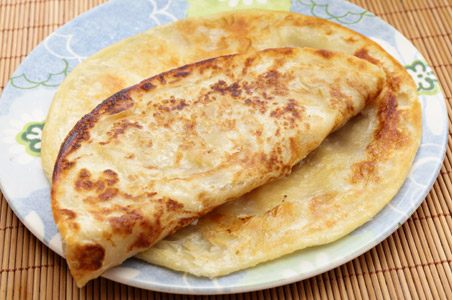 Indians love their bread, and parathas are perhaps the most versatile of them all. Whether served plain with a smear of ghee (clarified butter) or stuffed with ingredients like potatoes, onion, and cheese, this unleavened flatbread is the perfect complement to every meal (including the compulsory evening tea). In fact, an entire street in Old Delhi’s Chandni Chowk market is dedicated to the paratha: the paranthe wali gali, literally translated as "paratha street," houses vendors who serve their bread with a variety of chutneys, pickles, and curries, showcasing its ability to complement a host of flavors. 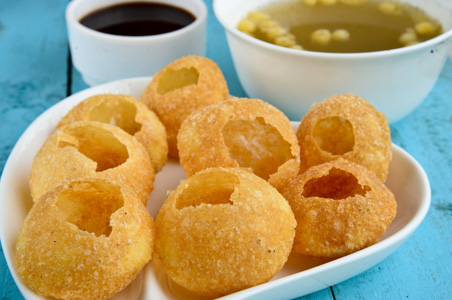 Gol gappa are practically ubiquitous in India, and in New Delhi you can spot vendors serving them up left and right. Though gol gappa recipes vary, these crisp, bite-sized puri (a type of bread) are usually stuffed with chunks of fluffy potato, spice-infused water, tangy tamarind, and cooling mint chutneys, onions, and chickpeas. Not only are gol gappa perfectly portable, but their varied textures and flavors make them a highly sophisticated street snack that will surely satisfy even the most discerning palates. 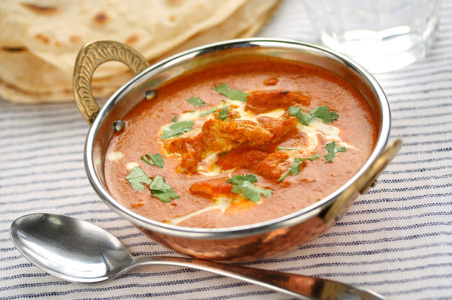 This fragrant and soul-warming dish is a Delhi classic. Though the name implies that butter is the main ingredient, butter chicken primarily derives it buttery texture from its garlic, ginger, and garam masala enriched yogurt marinade as well as its creamy tomato gravy. The chicken is most commonly cooked in a tandoor oven (developed by the Mughals who ruled Delhi from the seventeenth to nineteenth centuries), both tenderizing the chicken and imparting an irresistible smoky flavor that does not overpower it. Butter chicken alone is a complex mélange of spices and flavors, but when paired with steamed basmati rice and naan, it transforms into the ultimate comfort food. 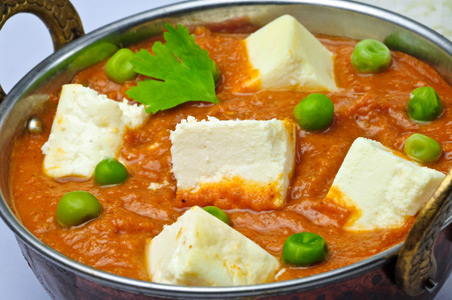 Originally from Punjab, Kadhai Paneer is a spectacular vegetarian dish that has become a staple in New Delhi cuisine. It derives its name from both the wok-like kadhai pan that it is traditionally cooked in, as well as the chunks of fresh, chewy, Indian cheese curds called paneer, which are at the forefront of the dish. A liberal amount of bell peppers, garlic, tomatoes, ginger, and spices compose the gravy, usually topped with a swirl of cream to thicken it up. Kadhai Panner is very mild, making it is the perfect dish for those who are averse to heat but still crave something fragrant and flavorful. Best of all, it goes wonderfully with a chilled mango lassi. 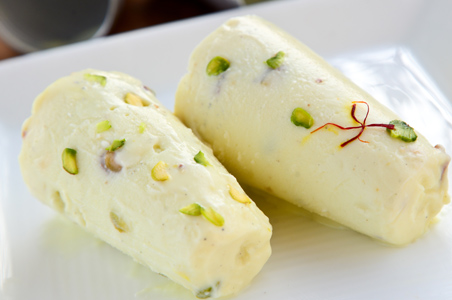 Beat the heat during India’s sweltering summers with kulfi, a frozen treat that is denser and has a more concentrated flavor than regular ice cream. Popular flavors include saffron, rose, cardamom, pistachio, and mango, but you can easily find dozens of flavors no matter where you go. Kulfi is served in a variety of different forms: on a stick, in matka, or earthenware pots, and even sliced up in bite-sized cubes. It is also sometimes served with sweet, crunchy vermicelli noodles, as well as fragrant rose syrup. 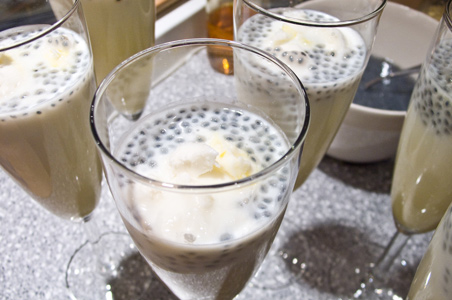 A cross between kulfi and bubble tea, falooda is a preferred summertime beverage of Delhiites. Consisting of either milk or ice cream, falooda includes tapioca pearls, psyllium, vermicelli, basil seeds, and rose syrup, but some recipes include different types of seeds such as garden cress to add a tangy and peppery flavor. This beautiful drink is at once satisfyingly sweet, cooling, and surprisingly healthy (especially when made with milk), making it a well-rounded and relatively guiltless dessert. 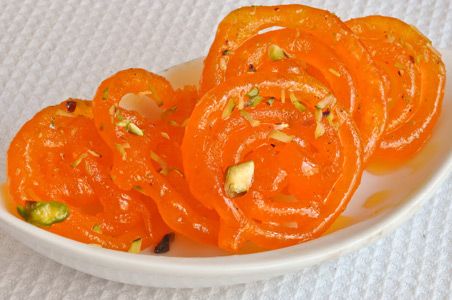 One bite into these piping hot, tubular sweets and it is hard to put them down. These funnel cake-shaped, bright orange twists are simultaneously crisp and chewy, filled with warm, sweet syrup that is incomparable to any other dessert. It is no wonder that distinctively Indian jalebis are considered the go-to sweet for major Indian festivals and celebrations, including India’s Independence Day.