News Annette Richmond Meet the Activists Reshaping the Travel Industry for the Better
Home  >  News   >   60 Minutes to a Perfect Glass of Wine: The California Wine Country

60 Minutes to a Perfect Glass of Wine: The California Wine Country 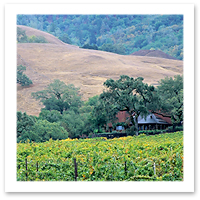 “Buy local” is all the rage with California foodies these days, which got this San Franciscan to thinking about how the concept might apply to wine. In 2007 I decided to do my part by favoring wineries within a 60-minute drive of the city. Silly, perhaps, but in addition to saving gas I’ve also tasted dozens of the California Wine Country’s most distinguished wines.

One of my favorite routes is to drive into the Carneros District just north of San Francisco. At the dozen or so wineries described below, you’ll have a glass of wine in your hand within 60 minutes of leaving town. These wineries are so accessible, you can leave the city after lunch, drop by two or three tasting rooms, and easily get back before dinner. All the wineries recommended have tastings daily from at least noon to 4 p.m., no appointments necessary.

Old School: Walter Schug’s namesake winery has an old-school (as in Bordeaux) winemaking style, and the decidedly downscale tasting room seems like a throwback to the days when Napa and Sonoma winemakers slapped an old door on two sawhorses and poured for whoever stopped by. Schug is known for robust, no-nonsense chardonnays and pinot noirs, but in recent years the cabernet sauvignon has charmed me almost as much.

Sittin’ and Sippin’: For a change from elbowing your way into a space at a three-deep tasting-room bar, try a place where patrons sit, sip, and enjoy vineyard views. Carneros wineries with table service (outdoors in fine weather) include sparkling-wine houses Gloria Ferrer and Domaine Carneros. Not too far from Domaine Carneros (where you can order caviar, cheese plates, and other light fare) is Bouchaine, whose tasting deck overlooks rolling vineyards. Bouchaine is known for chardonnays and pinot noirs, but the crisp 2006 sauvignon blanc was a recent surprise.

Stand Small: You’ll have to stand at the tasting rooms of two small wineries in Sonoma. I used to visit Castle winemaker Vic McWilliams when he sold his wines out of his garage near Bartholomew Park Winery. Since then, he’s sold the business so he can concentrate on his real love, creating the wines. Of his vintages currently for sale, the viognier and syrah captivated me the most. Like McWilliams, David Homewood, whose Homewood Winery produces only 3,000 cases a year, prefers a “hands-off” winemaking style that yields a fresh, unmanipulated taste. The 2005 Carneros chardonnay and 2005 McHugh pinot noir won my vote on a recent visit. 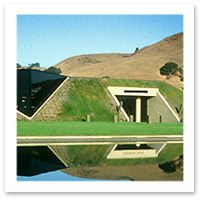 Glam Slam: With its postmodern design (the winery building is cleverly folded into rolling hillsides and hidden by greenery), contemporary art collection, and museum of regional wine history, Artesa hits a glam slam before you even reach the tasting room. Unlike Vic McWilliams and David Homewood, Artesa’s winemaker, Dave Dobson, is a real tinkerer. Often, on first sip, I’ll think he’s gotten too precious with his fine tuning but nearly always end up conceding that he’s pulled off a wine whose structure — not to mention his strategy — is a joy to ponder. Dobson’s barrel-fermented 2005 reserve sauvignon blanc is a case in point. The antithesis of Bouchaine’s aforementioned 2006 (which, though it’s not in Artesa’s class, I appreciated for its sprightly simplicity), it manages to be smooth, smoky, complex, and yet still lively on the palate.

We’re Talking —and Talking— History: You’d be hard-pressed to find chattier pourers than the ones I’ve come across on several visits to Gundlach Bundschu and its sister winery, Bartholomew Park. I favor the former for its wines — I buy at least some cabernet almost every year — and the latter for its history (some of California’s earliest winemaking was done on the property) and low-key picnic area.

Are the Wines Really This Good?: If you’re in a hurry (or just feeling lazy), you can easily sample the output of 12 boutique wineries at the Sonoma-Enoteca wine shop. On a recent visit with friends in the city of Sonoma, I stuck to three favorites: Robert Stemmler (Carneros chardonnay and Nugent Vineyards pinot noir), Favero (a smoothly earthy sangiovese), and Brutocao, whose very-berry zinfandel, made from grapes from Hopland Ranches (Mendocino County), attracted me in spite of my usual lack of enthusiasm for fruity zins. Also on the edge of Sonoma Plaza, in the same block of First Street East as Sebastiani Theatre, are a couple of other wine shops/tasting rooms.

I’m Not in That Much of a Hurry: No matter how much of a hurry I’m in to take that first sip, I usually skip the wineries nearest the city along Highway 121: Roche (nasty stuff), Viansa (often a tourist-bus zoo), Cline (yawn), and Jacuzzi (swank tasting room, but many of the Italian-style wines lack character). Luckily, Ferrer is less than a mile past the last two, and Schug isn’t much farther. In the city of Sonoma, I steer clear of Buena Vista Carneros (historic but dull); you can glean the history from equally historic Bartholomew Park.