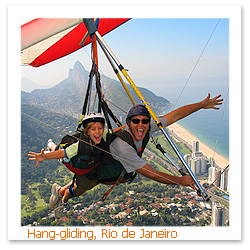 Sure, navigating a labyrinthine metro system, ordering dinner in a foreign language, and finding your way back to the hotel can be challenging, but they’re not the sorts of things you brag about on your return. If you’re tired of the glazed looks your friends, family, and co-workers give you at the mere mention of “on my last trip,” it’s time to up the ante. Your destination need not be exotic. The six adventures below can all be done in or near major metropolitan areas, and they’re all bound to elicit the oohs and aahs you’ve been craving.

Floresta da Tijuca, a dense tropical forest, surrounds Rio de Janeiro’s iconic Corcovado. The views are breathtaking from this national park’s 96 kilometers (60 miles) of narrow winding roads, but for a true bird’s-eye-view, enlist the services of Paulo Celani. A 15-year hang-gliding veteran, Paulo will fly tandem with you on your flight off of Pedra Bonita, 1,700-feet above the park. The 10- to 30-minute adrenaline rush costs R$240 and includes transportation from your hotel to the runway. www.justfly.com.br.

From late April thru October, the Hudson River Park, on Manhattan’s West Side, is the city’s prime swinging scene. The Trapeze School New York has been introducing New Yorkers and tourists alike to the glee of circus-style acrobatic swinging since 2002. From the jump-off platform 23 feet up, skimming the Hudson River and landing in Jersey actually seems possible. 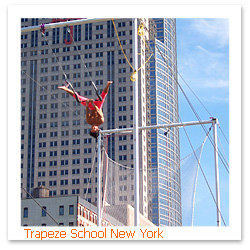 The two-hour classes run $45-65; students can expect to perform a swing, a knee hang, and maybe even a catch in their first class. An indoor gym is slated to open this year further uptown. Book early as classes often sell-out. The school also runs sites in Boston and Baltimore. http://newyork.trapezeschool.com.

Rising above everything else in Macau is the Macau Tower, the world’s 10th largest free-standing tower (1,100 feet). The extreme sports company A.J. Hackett offers a variety of thrills at the tower, including a two-hour climb 300 feet up the tower’s mast and an open-air stroll around the tower’s exterior — without any gates or handrails. The tower’s ultimate rush, though, is the Skyjump. You essentially bungee jump, free-falling 765 feet while control wires prevent you from swinging into the tower. www.macautower.com.mo.

Going up in Toronto

At 1,815 feet and 5 inches high, the CN Tower is the tallest freestanding tower in the world. Six glass-front elevators zoom up the outside of the tower, traveling 20 feet per second, a rate of ascent similar to that of a jet-plane takeoff. Each elevator has one floor-to-ceiling glass wall — three opaque walls make the minute-long trip easier on anyone prone to vertigo. An elevator attendant chatters away during each ride, putting almost everyone at ease. 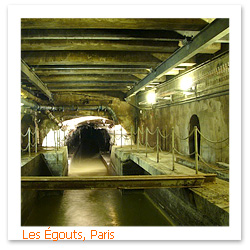 Everyone visits the Louvre, so surprise your friends back home by telling them you toured Les Égouts, the infamous 19th-century sewers of Paris. Brave their unpleasant — though tolerable — smell to follow an underground display describing the passages and footbridges famously immortalized as the escape routes of Jean Valjean in Les Misérables and the Phantom of the Opera. Signs indicate the streets above you, and detailed panels illuminate the history of waste disposal in Paris, whose sewer system is the second largest in the world, after Chicago’s.