Jackson Hole often is the first option that comes to mind for tourists seeking a gateway into Yellowstone National Park—and for good reason. Jackson Hole has it all: world-class ski resorts, glitzy art galleries, and swanky hotels. But those who desire a more authentic Old West experience with all the charm and amenities of Jackson Hole should look no further than the lively frontier town of Cody, Wyoming, a mere hour to the east of Yellowstone.

Founded by the famed showman Buffalo Bill in the late nineteenth century, Cody has remained true to the buckaroo spirit of the Wild West. It’s known as the “Rodeo Capitol of the World,” and its colorful downtown teems with cowboy apparel shops, affordable steakhouses, and bustling saloons. More than just a gateway town, Cody offers numerous attractions that make it worthwhile to postpone your trip to Yellowstone for a day or two. What follows are six can’t-miss sites in Cody…

Buffalo Bill Museum of the West 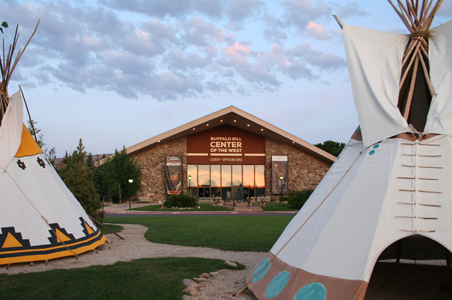 Dubbed the “Smithsonian of the West,” this wide-ranging facility encompasses five themed museums that cumulatively present the most informative introduction to the American West you’re likely to find. You can marvel at paintings and sculptures of the Western frontier at the Whitney Western Art Museum, and then gawk at the most comprehensive collection of US firearms in the world at the Cody Firearms Museum. The Draper Natural History Museum overflows with stuffed fauna from the Yellowstone region, while the Plains Indians Museum teaches visitors about the customs, artwork, and belief systems of the area’s Native American peoples.

But perhaps the most intriguing section is the one dedicated to the town’s namesake: the Buffalo Bill Museum. No historic figure did more to popularize the American West than William Frederick “Buffalo Bill” Cody. A scout and bison hunter in his youth, Buffalo Bill put together a traveling Wild West show that proved a smash hit throughout the United States and Europe. This museum details the extraordinary life of Cody’s most renowned inhabitant and is chock-full of interactive exhibits and multimedia presentations on his rip-roaring stage show and enduring legacy.

The Irma Hotel and Restaurant 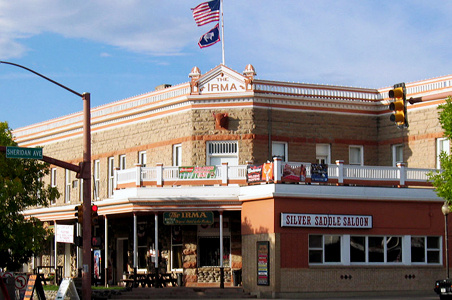 Erected by Buffalo Bill shortly after Cody’s inception, the Irma Hotel is the best place in town to soak up the spirit of the Old West. You’ll feel like you’ve been transported back to the turn of the last century in the main dining room, with its antique gold cash register, antler chandeliers, red-leather bar chairs, and tin ceiling. The hulking cherry-wood bar along the back wall was a gift given to Buffalo Bill in 1900 from Queen Victoria, who fell in love with his Wild West shows in London.

Every summer evening at 6 pm, costumed performers gather in the streets outside the Irma Hotel to reenact entertaining frontier skits. Unsurprisingly, the performance culminates in a raucous gunfight. Afterward, spectators should shuffle into the restaurant, where they can chow down on the all-you-can-eat prime-rib buffet. 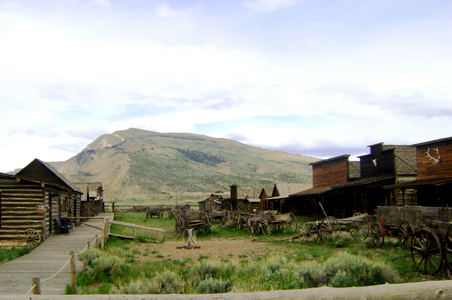 Old Trail Town gives visitors a rare glimpse of what a Western town actually looked and felt like. On the outskirts of Cody, this living museum includes 26 historic frontier buildings from the late nineteenth century that were salvaged and moved here from towns across Wyoming and Montana. You can meander through homely trapper cabins and atmospheric saloons, inspect several well-worn covered wagons, and even pay your respects to the early settlers at a historic cemetery. Fans of the hit movie Butch Cassidy and the Sundance Kid will be especially enthused at the chance to wander into the original “Hole-in-the-Wall Cabin,” which Butch Cassidy and other outlaws of the Wild West used to shelter themselves from the law. 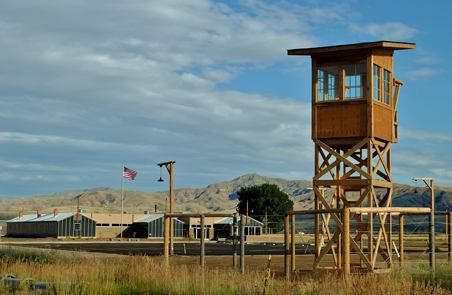 High in the rugged mountains northeast of Cody, this moving center recounts the harrowing story of the nearly 14,000 Japanese Americans who were forcibly relocated here during World War II. Through distressing oral histories, photographs, and walk-through exhibits, visitors have the opportunity to understand the daily life and hardships that inmates experienced. A nearby walking trail leads visitors through noteworthy sections of the relocation center. It’s impossible not to be moved by the survivors’ heartbreaking stories of suffering and perseverance. 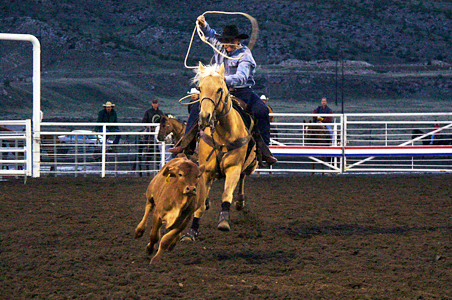 Nothing symbolizes the Wild West quite like the rodeo, and there’s no better place to catch this spectacle than in Cody. Held nightly from June to August among the gorgeous Wyoming plains outside town, the Cody Nite Rodeo features plenty of bucking broncos, cowboys with lassos, and expert horse riders. The silly skits performed by the fearless rodeo clowns will have families rolling in the aisles.

Visitors uninterested in rodeos should make a beeline instead for the Dan Miller Cowboy Music Revue at the Cody Theatre, just across the street from the Irma Hotel. Led by Nashville veteran Dan Miller and his fiddle-playing daughter, this musical quartet performs boot-tapping cowboy music six nights a week in the summer. Just make sure you remember all the words to “Home on the Range”—Miller loves nothing more than a good audience sing-a-long. 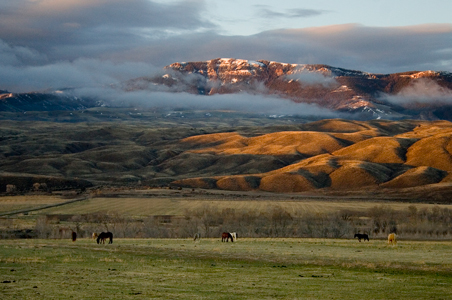 Once you’ve exhausted much of what Cody has to offer, you’re still in for one final treat. The Buffalo Bill Scenic Byway, the road that connects Cody to the east entrance of Yellowstone National Park, is one of the most awe-inspiring drives in the country. Following the path of the scenic Shoshone River, the byway winds through stunning rock formations and mountain vistas. There are several spots along the way where you can stop to fish, hike, ride horses, and catch glimpses of local wildlife in the Wapiti Valley. Of particular interest is the Pahaska Tepee, the hunting lodge that Buffalo Bill built in 1904 a mere two miles from Yellowstone. Stop by to marvel at the spectacular views that Buffalo Bill enjoyed during hiatuses from his Wild West tours. When you finally pull up to the east entrance of Yellowstone, don’t be surprised if you feel a twinge of regret that your stay in Cody has now concluded.