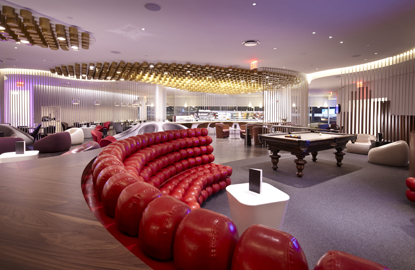 Airline travel isn’t abundantly filled with the luxuries of days past—tuning in to an episode of the ABC drama "Pan Am" is proof of that. However, if you do spring for a first-class ticket on some airlines you receive extras like violin music, a massage, or caviar. Even some economy-class tickets offer pampering and convenience, with a small fee. Here are the six best reasons to either up your seat class, or kick in a bit more money for a luxury perk.

Massage Out the Travel Kinks

Traveling out of Heathrow Airport in London or JFK International Airport in New York City on Virgin Atlantic Airways? If you’ve bought an upper-class (the airline’s term for first-class) ticket, admission to their clubhouse (lounge) is free. Simply pad over and relax with a 15-minute massage—you can extend the time for a fee, but you’ll get a 30% discount off of posted rates. As a bonus, JFK’s Virgin lounge (pictured above) just opened on March 5.

Insider Tip: Gold Member status in the airline’s Flying Club is also enough to score a massage. Any Virgin Atlantic Airways economic-class ticket holder, by paying a daily fee ($35) to enter the club lounge, can receive a massage too.

Wi-Fi All the Time

An industry first, Delta Airlines rolled out its annual Wi-Fi pass ($400) last year. It guarantees access on your iPad, smartphone, laptop, or any other device while in the air. Now you don’t have to spend half a day catching up on emails when you arrive at your destination. Or, if you simply want to update your Facebook status, that’s okay too.

Insider Tip: Day passes ($12) that last 24 hours are also available. It’s a good alternative if you’re anything but a frequent flier but still want to be connected while in the air.

As part of its "Chef on Call" complimentary dining service exclusively for First Class passengers, Malaysia Airlines includes caviar and lobster on select flights. From Kuala Lumpur you can choose from both, while the London-departure flights feature only caviar. The catch is that you must order it at least 24 hours before the flight takes off. But who is going to forget the chance to snag a meal of caviar and lobster when you’re used to getting—pardon the pun—peanuts?

Insider Tip: The wine list isn’t too shabby either. Pair your gourmet foods with selections such as 2002 Champagne Dom Pérignon from France.

Who wants to listen to the dull hum of the plane soaring thousands of feet above land as you dine in style? Asiana Airlines gets that. The South Korea-based airline offers premium live entertainment to first-class and business-class passengers that, on some flights, features violinists who rove the aisles as best they can.

Insider Tip: Pretend you’re out on the town after a show with a cup of Rainforest Alliance certified coffee or Italian espresso, or a flute of sparkling wine, served after your dinner.

Don’t want to eat your meal or soda just now, but want it chilled and ready when you want it? That’s where the personal mini bar, inside Diamond First Class suites located on Etihad Airways planes, comes in handy. It’s available on all their flights, including the most popular routes between Abu Dhabi and New York, Chicago, or Toronto. But the best part? Your mini bar is fully stocked with drinks.

Insider Tip: Drink all you want. The 6’8"-long flat-bed seats in Diamond First Class look pretty comfy, with stylish black-and-white striped sheets, leather upholstery from the same company that outfits Ferrari cars, and the ability to snap into sleeping mode with the push of a button.

Emirates Air first-class tickets on the A380 plane ensure you’re fresh and clean upon arrival thanks to an in-flight shower. Located on the plane’s upper deck are two shower spas. An appointment is necessary but what better way to feel pampered during your long flight?

Insider Tip: No need to bring all your3-fluid ounce toiletries. There’s a toilet kit packed with spa products, but the size of the shower spas will truly blow you away. Gorgeous teak woodwork, a rainforest shower head, ample space, and fluffy white towels also make this more of a spa experience. This is a far cry from the cramped bathrooms in each cabin.