NYC: 5 Ways to Save When Dining Out

New York is a hotbed of culinary genius. Unfortunately a four-star dining experience can easily cost as much as a night’s hotel room. However, adventurous foodies on a budget need not settle for anything less than scrumptious. Here are five strategies for saving while savoring:

If you have your heart set on eating in some of the city’s fancy schmancy dining establishments, make lunch the day’s best meal. By ordering off a heralded restaurant’s prix-fixe lunch menu you’ll appreciate the spot’s distinct flavor as well as the cheaper tab. Priced at $27, Gotham Bar & Grill’s three-course menu is a steal.

To the East Village that is. If you’ve never ventured to Alphabet City (so named for its letter-named avenues), you’re missing some of the city’s best culinary values. Small bistros and ethnic eateries abound, as do bustling bars perfect for lingering over an afterdinner drink. Squeeze into Angelica Kitchen for a sense of the neighborhood’s bohemian flair — the vegetarian menu is nothing short of inventive. 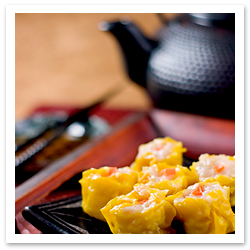 Chinatown is famous for its surplus of vendors hawking everything from fresh fish to faux fashion accessories. But the dumplings served at Dim Sum GoGo are certainly among the district’s very best bargains. You’ll be amazed at how much dim sum ten dollars can buy.

Other delightful Chinatown spots for dim-sum: