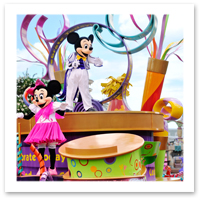 The good news: Orlando’s Walt Disney World offers gi-normous parades, fireworks, and other evening spectacles so you can end your theme-park day with a bang. The bad news: Everybody knows the shows are fabulous, so virtually every guest in the park converges at one place and one time to watch them. The result is major crowds and hassles… unless, of course, you know a few insider tips.

Of the many Disney shows three are not to be missed. Though the themes of the Magic Kingdom parade change, it always goes down Main Street and through Frontierland, and the Disney characters are always out en masse. This is followed by Tinker Bell’s Flight—where a gymnast, dressed like Tink, slides down a wire extended from the top of Cinderella Castle—and over-the-top fireworks.

IllumiNations, situated around a beautiful World Showcase lagoon, pays homage to the countries of Epcot with light-and-laser effects, music, and fireworks. Fantasmic! performed in its own stadium Hollywood Studios is a cartoon Armageddon where Mickey and his pals battle every villain Disney has ever created, from Cruella de Vil to Hades. Guess who wins?

To minimize closing time trauma, keep these points in mind:

1) Know your show times.
IllumiNations runs every night at Epcot at 9. Period. Things are a little more complicated with the parades and fireworks at the Magic Kingdom and the Fantasmic! Show at Hollywood Studios, as they’re scheduled periodically, and starting times vary.

Not surprising, shows are more frequent in summer and during holidays than the in the off-season, which Disney defines as any time when kids are traditionally in school. So, if you’re visiting during the off-season, create a touring plan before you leave home to make sure that, for example, you’re in Hollywood Studios on one of the nights Fantasmic! is scheduled.

Visit Disney’s calendar page and then enter the date you’re visiting. The whole day’s entertainment schedule will pop up. Once you know what show is playing what night, you can plan accordingly.

Short of an all-out hurricane, IllumiNations and the Magic Kingdom fireworks go on as scheduled. (Although Tinker Bell only flies on clear nights.) Fantasmic! and the parades can be cancelled at the last minute due to bad weather.

2) Timing is key.
If you want to sit curbside for the Magic Kingdom parade, show up 45 minutes in advance. If you’re willing to stand (and hold up your squirming, kicking, ice-cream-dripping kids) 15 minutes is fine. IllumiNations has such a large viewing area that it’s OK to be there 10 minutes in advance. For Fantasmic! you’ll need to be at the stadium an hour early on a busy day, 30 minutes on a non-busy day. But at least the stadium has seats.

3) Remember the old adages about location.
At the Magic Kingdom, the crowds are always thinner in Frontierland than along Main Street. Just be sure to move back to Main Street after the last float passes; the bridge between Tomorrowland and Main Street is the perfect place to watch Tinker Bell’s Flight and the fireworks.

All the seating at Fantasmic! works, as long as you avoid the wings on the far sides of the stadium. (And forget trying to place yourself for a speedy exit—it’s impossible.) Likewise, the lagoon at Illuminations has plenty of good viewing. Just make sure you’re not under a tree that will limit your view of the fireworks. And be sure the wind isn’t blowing toward your face; otherwise the smoke from the pyrotechnics will shortly follow suit.

4) Know what to expect.
Mickey rides the first float of the Magic Kingdom parade, so if you’re running late, you’ll miss him. The final fireworks salvo at Illuminations is both not-to-be missed and impossible to miss. (People at other theme parks can hear it!) The high point of Fantasmic! is when the riverboat full of characters comes out at the end, although there are also impressive stunt sequences during the Pocahontas segment near the middle of the show.

Oh, and if you’re wondering why there’s no big closing show at the Animal Kingdom it’s because fireworks and light effects would frighten the animals. That’s the official Disney explanation, at least.

5) Be Kind to your budget.
Don’t pay for the park-hopper ticket option just so you can watch the Magic Kingdom fireworks. Instead, stop by the beach at the Polynesian Resort, just across the Seven Seas Lagoon from the Magic Kingdom. You won’t be able to see the parade from here, but you’ll have a spectacular view of the fireworks, complete with piped-in music. Not only is this beach a more comfortable place to sit than the curb on Main Street, but watching the fireworks from afar works better for younger kids; the noise level is much less frightening.

Kim Wright Wiley, mother of two, wrote her first edition of Walt Disney World with Kids in 1989, and 20 editions (going on 21) later, she’s exceeded 50 visits to the parks, a statistic that stuns even her. Her Disney favorites? “I’m addicted to Rock ‘n’ Roller Coaster, my favorite character is Eeyore, and if I have anything big to celebrate, I do it at the California Grill.” When not at the theme parks, Kim lives in Charlotte, NC.