These days, gimmicks seem to be the name of the game in the restaurant industry. Establishments around the world are racing to one-up each other, in hopes of debuting something outlandish enough to generate buzz and usher customers through the front door.

Some parts of the world seem to be especially keen on themed eateries, where the more bizarre, the better. For example, in Japan—a country that always seems light-years ahead of the rest of the world in trends—themed restaurants are almost de rigueur, with a number of sub-genres now emerging. Cat cafés, for example, where cats prance around while patrons casually sip tea, are quite common. The country also has multiple jail-themed restaurants complete with handcuffs attached to willing diners and costumed staff jumping out to spook guests.

Following suit, a number of restaurants around the world are looking for a bigger picture that extends beyond menu, service, and basic decor—here are five of our favorite recent and scheduled openings. 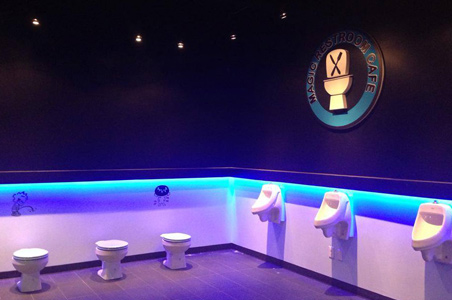 Putting an entirely new spin on the "bowl" part of the toilet, a new toilet-themed restaurant opened in City of Industry, California, in mid-October. At the Magic Restroom Cafe, patrons sit on toilet-shaped chairs that resemble what could be fully functioning toilets, and meals are served in toilet-shaped ceramic dishes. The menu touts Taiwanese food and includes "black poop"— a chocolate sundae.

While the scatological theme might be (understandably) off-putting to many, the toilet theme was actually imported from overseas, where it has been successful in China (Beijing, Shanghai, and Hangzhou all have their own contemporary toilet restaurants.) 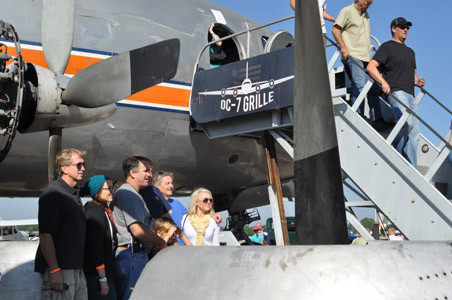 The DC-7 airplane was the first to fly nonstop from coast to coast back in 1953, with American Airlines. The retro aircraft is now land-bound in Florida, where owners are readying to reopen it as a restaurant that pays homage to the golden days of air travel.

The DC-7 Grille, still awaiting "takeoff," will be a 40-seat, family-run restaurant in New Smyrna Beach, Florida. While diners wait for their food—one can only assume the menu is not modeled after typical airplane fare—they’ll be able to tour the cockpit and check out the craft’s original engine parts. Tables also will have "flight attendant" call buttons and headsets to keep tabs on cockpit goings-on.

Everyone on staff at Twin Stars diner in Moscow, opened in October, is an identical twin. Pairs, dressed and coiffed identically, are scheduled to work together as either servers or bartenders. The owner (not a twin) says inspiration for the restaurant came from the Soviet fairy-tale film Kingdom of Crooked Mirrors, about a girl with a double living another reality.

The restaurant’s tagline is "Burgers, Cocktails & Twins" and has a lounge look, with low lights, multicolored fixtures, and street art-like illustrations decorating the walls. Perhaps a double should have been expected, but this themed restaurant concept has actually been done before with New York City‘s Twins Restaurant. 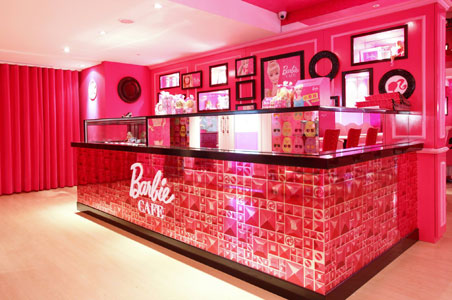 Dining in the castle at Disney World might be the only dining experience to rival Barbie Cafe in Taiwan‘s capital city, Taipei. Barbie’s corporate owner—U.S. toy manufacturer Mattel—licensed the venture, which opened in Taipei at the start of this year. As to be expected, staff is outfitted from head-to-toe in pink apparel stamped with the Barbie logo, complete with tiaras and arm bands.

The café—currently the only Barbie-branded restaurant in the world—is strategically situated in a popular shopping district and while diners can order Barbie cakes and multicolored macarons, they can also purchase official Barbie paraphernalia. Taiwan was chosen as the location because, like Japan, themed restaurants are extremely popular in the country. 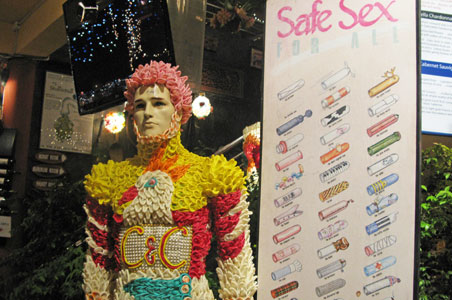 Themed restaurant Cabbages & Condoms comes with an agenda to promote sexual health with dinner. The restaurant chain opened in Bangkok, where politician and activist Mechai Viravaidya—recognized by The Bill & Melinda Gates Foundation for his work—took a multifaceted approach to public health and spreading the word about family planning, by helping to establish the restaurant in multiple locations. The theme has since branched out to Oxfordshire in the UK.

The UK outpost delivers a pamphlet about sexual health at the end of the bill, while the original Bangkok spot hands out condoms. Customers can also purchase condom-related merchandise. What really gets people in the door, though, is the traditional Thai food, which receives high reviews.