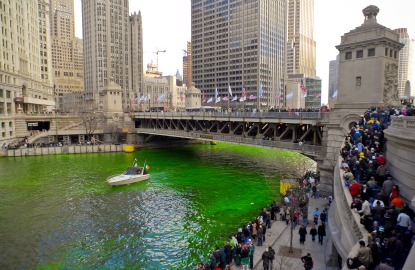 More than 40 million Americans boast Irish descent today. The total population of Ireland? Just over 6 million. So it’s no wonder on the holiday when "everybody’s Irish," the USA is where the Guinness flows thickest. Cities countrywide flaunt all their Gaelic glory in the form of parades, parties, and pub crawls with a handful staging unique St. Patrick’s Day events you couldn’t experience anywhere else. From the longest-running Patty’s parade in Boston to a New Orleans-style celebration and more, here are the top 5 places to shamrock it out stateside this March 17th.

1) Two Ways to Celebrate in NYC

On the honorary "alcoholiday" of binge drinking (to quote Irish author Oscar Wilde), when indulging in pints of green beer has become the norm, organizers of New York City’s first annual Sober St. Patrick’s Day are offering a new booze-free alternative. As a reminder there’s more to Irish culture than getting sloshed (in fact, until recently, every pub in Ireland used to be closed on the holiday), the event aims to overshadow the drunken hullabaloo by providing a traditional, foot-stomping good time that you’ll "remember when you wake up on the 18th." The lively lineup includes performances by five-time All-Ireland champion fiddle player Brian Conway, Celtic mainstays the John Whelan Band, Irish step dancers, and more. However, if you’d like to celebrate at the traditional New York City St. Patrick’s Day Parade, just make your way to Fifth Avenue, where the parade will start at 11 a.m. at 44th Street, and head north to 86th Street.

FYI: Tickets are $12. Hit up the event right after the big Fifth Avenue parade, which ends only a few blocks away. Sorry, no drunken Irishmen allowed!

A mad mix of Mardis Gras and Irish-inspired brouhaha, St. Patrick’s Day in New Orleans is just what you’d expect. The city, normally known for its French roots, also lays claim to the largest port of entry for Irish immigrants in the south. Kicking off a week-long celebration of parades and pomp on March 11th, beads and flowers, along with potatoes, cabbages, carrots, and onions (standard Irish stew ingredients) are tossed to revelers from re-used Fat Tuesday floats as marching bands play on. Constant parades and block parties are held in the French Quarter and beyond through March 18th, featuring live music, celebrity appearances, and plenty of whiskey and hurricanes.

Don your green garb this year and join the 400,000-plus spectators descending on the Loop in Chicago to watch the Chicago River "go green." A St. Patrick’s Day tradition since 1962, splashing 40 pounds of the fluorescent (actually orange) environmentally-friendly dye turns the downtown portion temporarily kelly green in honor of the day. Anyone can view the dyeing process for free from the Riverwalk, but for the optimum experience, book a guided 90-minute river cruise via Shoreline Sightseeing Cruises ($37; departs 10 a.m. and 2 p.m. from Navy Pier) and ply the emerald waters while munching on an Irish lunch buffet.

Location: Best viewed from the Chicago Riverwalk between Columbus and Wabash Avenues.

FYI: Afterwards, pop over to the Downtown Chicago Parade, proceeding at noon down Columbus Drive.

Many argue the holiday’s current unbridled bravado began in Boston. In fact, the first-anywhere St. Patrick’s Day parade was held here in 1737 (Dublin didn’t throw its first to-do until 1996!). Considered America’s "most Irish city," Boston’s four-day weekend celebration is one of the world’s biggest Patty’s Day bashes. Kicking off on March 14th with Celtic-punk group the Dropkick Murphy’s annual hometown show (tickets still available at press time; $32.50), the festivities climax on March 18th with Southie’s Annual Wearin’ of the Green parade that started it all. On March 17th, nosh complimentary corned beef sandwiches at the Irish Village in Brighton, Boston’s temple to pub culture since the 1970s, which boasts the most perfect pint of Guinness in the land.

FYI: Visit the Seattle Irish Club for a full list of events.