News Christina Mueller Yes, You Can Visit Los Angeles Without a Car. Here's How to Use the L.A. Metro Subway System
News5 Reasons to Go to Prague Now

5 Reasons to Go to Prague Now

July and August may be peak months for tourism, but autumn in Prague has its own allure. The weather is pleasant throughout September—especially during babí léto (the Czech equivalent of Indian Summer); and in October daytime temps remain in the mid-50’s. Moreover, due to the low angle of the sun, there’s a special quality of light that heightens the city’s romance quotient and turns its already-beautiful buildings into architectural eye candy. Need further convincing? Here are five more reasons to go. 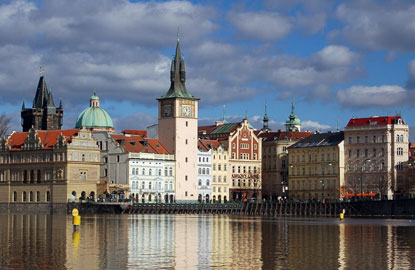 The biggest incentive for visiting in fall is that it’s easier to appreciate Prague’s iconic attractions. In high season, Old Town’s entrance to the statue-studded Charles Bridge looks like the starting line for the Boston Marathon, and the tour groups charging across the grounds of glorious Prague Castle resemble an invading army. Meanwhile, the sheer number of people inside the cramped Jewish Quarter makes it difficult to approach the former ghetto’s poignant sites in an appropriately reflective manner. Thankfully, though, the crowds steadily dwindle as the mercury drops.

Insider Tip: The cobbled, curvy streets of Old Town are geared towards pedestrians, yet public transit—which includes subways, buses, trams, and ferries plus the Petrín funicular—offers a convenient way to connect the other dots on your itinerary. It’s a bargain, too: three-day tickets cost $16. 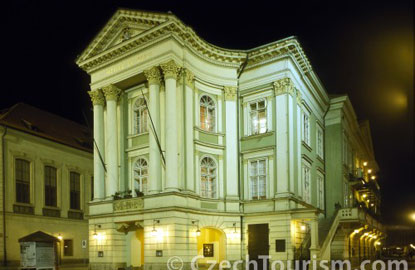 Europe’s performing arts companies typically take a three-month summer hiatus, returning to the stage in early autumn. In opera-obsessed Prague that means you can now see a full-blown musical extravaganza rather than settling for some aria-singing busker on the street corner. Make the most of the opportunity by attending a performance at the palatial Estates Theater where Don Giovanni, conducted by Mozart himself, premiered in 1787. Despite the opulent setting (and opera’s uppity reputation) tickets are democratically priced. In fact, you can snag decent balcony seats for less than $25.

Insider Tip: Prefer to hear something more contemporary? The acclaimed Strings of Autumn festival strikes the right chord with lovers of jazz, fusion, and world music. Billed as "a musical crossroads where genre meets genre and tradition meets experiment," it’s on September 23 to October 31. 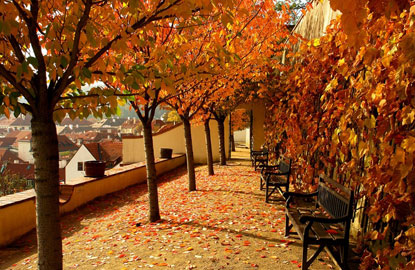 In fall, flashes of copper, crimson, and incandescent orange enliven "Golden Prague" as the capital’s trees change color. October is the best time for foliage fans to come (there’s a reason why the Czech name for November—listopad—means "leaf shed"); and public parks are the best places to admire Mother Nature’s display. Petrin Park, poised atop the city’s highest hill, and Letna Park, overlooking eastern Prague and the Vltava River, are reliable choices. Those willing to travel slightly further can go wild in Kunratice Forest or Obora HvÄ›zda, urban woodlands easily accessed by public transit.

Insider Tip: Leaf peepers share the woods here with mushroom pickers. In a season that runs through October, foraging Czechs will gather over 28,000 tons of porcinis, chanterelles, and other wild species. If you know the difference between edible and potentially fatal fungi, join them. 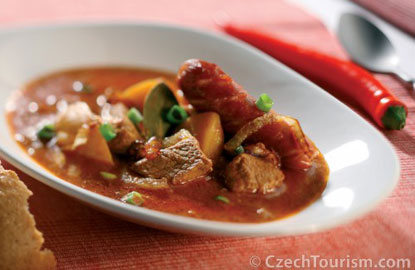 Let’s be honest: traditional Czech comfort food is notoriously heavy and rich. So devouring platefuls of it during the dog days of summer can actually leave you feeling pretty uncomfortable. On crisp autumn evenings, however, it’s a different story. That’s because, sustaining stick-to-your-ribs dishes—like vepÅ™o-knedlo-zelo (roast pork and cabbage served with dumplings) or Å™ízek (a variation on schnitzel) with deep-fried potato pancakes on the side—are ideally suited for cool weather. Cap your meal with a crepe-style palačinky or fruited-filled ovocné knedlíky and a strong cup of turecká káva.

Insider Tip: A program launched by the Czech Association of Hotels & Restaurants and Association of Master Chefs & Confectioners identifies eateries serving quality regional fare. Search the Czech Specials website for options or look for a plate-and-cutlery logo at participating spots. 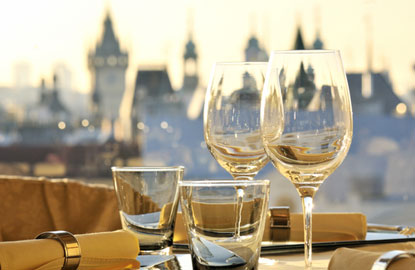 Legendary Czech beer can, of course be quaffed in large quantities year round. But each fall, wine steals the spotlight.Southern Moravia (the country’s main wine-producing region) hosts themed tours, tastings, and festivals to honor the annual grape harvest. Even if you stay exclusively in Prague you can get a quick lesson in viniculture at St. Klára Vineyard: established in the 13th century, it is part of the Botanical Gardens . You may also sample native wines city-wide. The bars of Vinohrady (an upscale neighborhood named for the vineyards that once covered it) are a great place to start.

Insiders Tip: Oenophiles should try Burčák, a partially-fermented wine sold September through November only. The sweet, fruity taste and juice-like consistency masks its potency. So it might be wise to practice saying the local toast—"Na zdraví" (Naz-drah-vi)"—before imbibing too much.

Want to know where else to go?

Check out our top 7 fall destinations; take a look at these great fall foliage trips across the country; and scope out our guide to seeing Montreal by bike.

Susan MacCallum-Whitcomb has been besotted by Eastern Europe since she first discovered it during her student days. A frequent fodors.com contributor, she also works on Fodor’s guide books—including Prague and the Best of the Czech Republic. Susan lives in Halifax, Nova Scotia with her husband and two children.