Deals Leila Najafi Attention West Coast: You Can Now Book Flights to Paris for as Little as $321
Home  >  News   >   Where We’re Going in ’08: Europe’s Rising Stars

Thought you knew Europe? Think again. Here, Fodor’s editors and writers pick their favorite hot new cities and countries in Europe. Forget that fifth visit to Paris, Madrid, or London — try one of these places on for size. 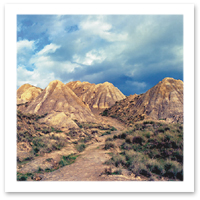 Never heard of Basilicata? We’re not surprised. But if you saw Mel Gibson’s The Passion of Christ it will certainly look familiar. An arid landscape dotted with ancient dwellings carved into solid rock allowed Basilicata to stand in for the Holy Land. Now it’s a destination in its own right, and luckily it has more to offer vacationers than Jerusalem did two millennia ago. Several of our Fodorites’ favorite Italian towns are in the area, including San Chirico and Matera. The last of these boasts a sprawling UNESCO World Heritage Site which served as a primary movie location. Staying there is easy. You can rock on at the Sassi cave hotel for €65. Getting there, on the other hand, requires effort. You’ll have to drive in or arrive by train using the regional Ferrovie Appulo-Lucane line. The closest air link is 40 miles away in Bari.

Italian cities once treated as stopovers are finally getting their star billing. Bologna is a case in point. It’s the capital of Emilia-Romagna, the region that gave us Parma ham, Parmigiano Reggiano cheese, and balsamic vinegar. Moreover, Bologna itself is the “birthplace” of tortellini, tagliatelle, mortadella and ragu alla Bolognese. From stand-up stalls to upscale restaurants, there is no shortage of places to sample these specialties. But if you hope to share the city’s culinary bounty without sharing its nickname (“Bologna the Fat”), it might be wise to work off some calories by power-walking around historic Piazza Maggiore or climbing the 498 steps of Torre degli Asinelli, one of the city’s two leaning towers (take that Pisa!). Need another reason to visit? Bologna’s nifty wine bars are less pricey than those in Florence. Looking for equally nifty lodgings? Book a room at the visually gratifying Art Hotel Novecento. Eurofly offers affordable flights from New York May through October. True bargain hunters can also grab no-frills flights originating in various European hubs year round. 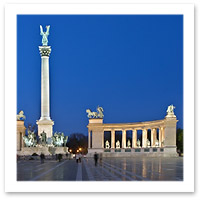 Budapest, Hungary
With its decade-long restoration of historical buildings now complete, Budapest has never looked better. History runs deep here, whether you’re talking about the 3000-seat Great Synagogue, the Royal Palace, Heroes Square (photo right) or St. Stephen’s Basilica, where you can climb 364 stairs to the top to get a stunning view of the city. New to the city’s cultural scene is the Holocaust Museum, which has fast become one of the world’s most moving memorials to that 20th-century cataclysm. Pleasure-seekers should check out Margaret Island. Once King Imre’s ruling base in the 12th and 13th centuries, it now encompasses a park and pool complex where locals head for sunbathing, jogging, and relaxing. Malev, Hungary’s national air carrier, frequently has great low fares to Budapest from New York and most European cities.

Lisbon is a place of distinctly Portuguese charms — a refreshingly authentic and affordable city in an increasingly homogenous and expensive world. Pastel houses line ages-old stepped alleys, black-and-white mosaic sidewalks border boulevards, and azulejo masterpieces adorn art-nouveau buildings. Learn more about the national art form at the Museu Nacional de Azulejo. Explore classic Portuguese paintings and colonial riches at the Museu de Art Antiga, and consider staying down the street at As Janelas Verdes, a reasonably priced inn in an 18th-century town house. Spend an afternoon shopping in trendy Barrio Alto, building a unique wardrobe with pieces from some of the city’s well-established, local, and often very accessible designers. Dinner at Pap’ Acorda is a chance to try cutting-edge versions of Portuguese classics, including the rich seafood stew. Cap everything off with an evening of soulful, swelling music at Adega do Machado, one of the country’s oldest fado clubs.

The culturati may have experienced a collective twitch upon learning that the European Union selected Liverpool, the gritty, Beatles-besotted city in England’s Northwest, to be Capital of Culture for 2008. But after polishing its cultural assets and historic waterfront and lining up events (including a concert by Paul McCartney), Liverpool is ready for its close up. At the Albert Dock, learn about the city’s past at the Merseyside Maritime and its newfound artistic clout at the innovative Tate Liverpool, Britain’s largest modern art gallery outside London. Pair the Tate with a visit to the Walker Art Gallery, a Victorian treasure house stuffed with paintings by the Pre-Raphaelites. For that Beatles fix, the Beatles Story delivers re-created scenes of the Fab Four’s glory, and the august National Trust administers Mendips and 20 Forthlin Road, the boyhood homes of John Lennon and Paul McCartney. Liverpool’s waterfront Malmaison Hotel is the place to stay, or check if the ballyhooed but delayed Beatles-themed Hard Day’s Night Hotel opens in February. Liverpool is two-and-a-half hours from London by train, or you can fly into nearby Manchester Airport; there’s some direct service to Manchester from the U.S. 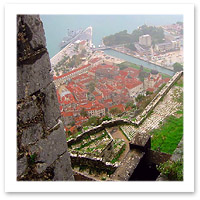 For years this gem on the Adriatic Sea has avoided publicity, which explains the almost 45 miles of pristine and undiscovered beaches along the Budva Riviera. But there’s more to Montenegro than sun and sand. History and luxury snuggle up in preserved Medieval cities like Sveti Stefan. Nature freaks can get their fix driving along the road to the Bay of Kotor, which boasts splendid views from the high cliffs surrounding the bay, and Skadar Lake is the largest lake in the Balkans and one of the most beautiful natural attractions in Montenegro. When in Budva, hang your hat at Villa Montenegro, the hotel of choice for high-ranking politicians, industrialists, and European movie stars. The marble and granite villa has a dozen well-appointed rooms and is perfectly situated on the coast overlooking the sea.

Bavaria’s capital has long been overshadowed by its bigger, cooler sister, Berlin. But in 2008 it is Munich’s turn to shine. The city, which turns 850 this year, has always worn its age well: witness the medieval Alter Hof, the gothic Frauenkirche, or the baroque Nymphenburg Palace. Now, in honor of its birthday, Munich is polishing up other architectural gems, namely the City Museum and Cuvilliés Theatre. (The latter, appropriately, raises the curtain this June with a performance of Mozart’s Idomeneo, an opera that had its premiere at the Cuvilliés in 1781.) As if that wasn’t enough, the city is looking ahead as well. The futuristic BMW Museum and a new building to house the Brandhorst Collection of contemporary art are slated for spring and fall openings respectively. Worried that taking all this in will leave you exhausted? Put your fears to rest. Weary travelers can bed down in five-star luxury at Rocco Forte’s Charles Hotel, near the botanical gardens, which began welcoming guests in October. Weekend package rates start at €375 for a double room.

You might not expect to see the words “Oslo” and “hot” used in the same sentence. After all, even in summer average temperatures here only hover around 60 degrees F. But, metaphorically at least, this place is smokin’. Fueled by money made from North Sea oil, Oslo is in the midst of a building and renovation frenzy. Recent years have seen the opening of the Nobel Peace Center, a museum-like venue that Al Gore visited when he was in town picking up his Peace Prize; and the Holocaust Center, which houses haunting multi-media exhibits. The icing on the cake is the $700-million harborfront Opera House, opening April 12. Designed, like the Sydney Opera House, to be instantly iconic, it features ambitious angles and a roof that doubles as a recreational space. Design aficionados can follow up an evening at the opera with a night at the stylish new Grims Grenka Hotel, where rooms start at €270. Considering Oslo is one of the world’s priciest cities, that’s a deal. You can sometimes snag transatlantic deals on flights offered by Icelandair. 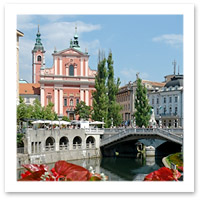 Rare is the place that offers something for every traveler, but Slovenia is one such place. The Julian Alps in the north attract skiers and hikers while a sliver of the country along the Adriatic is a magnet for beachcombers and sun worshippers. The capital, Ljubljana, is a history maven’s delight, and a terrific base for exploring the richness of the region. Culture buffs can get a bead on medieval history at the 12th-century Cistercian Monastery, in Sticna, while oenophiles can indulge their sensibilities along the Posaveje Wine Trail, which weaves its way along 20,000 acres of vineyards. The Rogla Ski Resort, in the Pohorje mountain range, is all about the snow in winter, but in summer its waterfalls, forests and lakes are enchanting. Wizz Air offers regular flights from Brussels. Photo: Franciscan Church in Ljubljana.

Croatia’s capital has shrugged off the cloak of the war-torn 1990s to reveal a city of inexhaustible charm. Indeed, the shops and boutiques rival those of Paris and Milan, the architecture is sophisticated, the cafe culture is lively, and, lo and behold, Zagrebians can toss back pints like British footballers. The city emerged from the war with remarkably little permanent damage, as anyone can see when walking through Jelacic Square, where friends convene at cafes to drink the fine local coffee and watch passersby. From the square, it’s a short walk to catch a funicular to Upper Town, filled with relics of the past — cathedrals, fortifications, cobblestone streets — and contemporary trappings like Mestrovic Atelier, where Croatian Sculptor Ivan Mestrovic lived and worked from 1924 to 1942. If you come, pick up a Zagreb Card (it costs 90 kunas, or $18, and is good for 72 hours) at a tourist info center or at your hotel. The card offers visitors unlimited public transport and discounts at almost all museums and many restaurants and shops. Low-cost carrier Wizz Air has flights to Zagreb from London’s Luton Airport.