News Apeksha Bhateja It's a Tie: The 2 Most Annoying Airline Passenger Behaviors of 2022
News5 Frightful Halloween Experiences for the Whole Family

One of the real joys of Halloween is The Scare. You know, the all-in-good-fun creepy sounds and what’s-behind-that-door spooky stuff that frightens your kids (and, admit it, chills your bones a bit too) as you explore a chilly October night. Add a little fright to your family’s Halloween with a visit to one of these scary places! 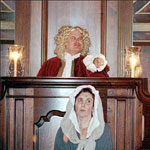 Colonial Williamsburg is, of course, a sort of historic theme park. While visitors can watch recreations of colonial life here year-round, Colonial Williamsburg marks the Halloween season with “Cry Witch,” a reenactment of an early 18th century witch trial that happened here. Watching the the accused witch, Grace Sherwood, stand trial can really frighten younger children; the audience decides whether she’s guilty or innocent. There are also scary, spooky tours by candlelight, and retellings of ghost legends. Edgar Allen Poe’s frightening poems and Gothic works, such as The Raven and The Tell-Tale Heart, are performed at the Williamsburg Lodge in afternoon, evening, and midnight the weekend before Halloween. colonialwilliamsburg.com.

Scary in large part because of its historical significance, Haunted Happenings makes good use of Salem’s haunted past. After all, over 150 people were accused of being witches around here in the late 1600’s. Salem transforms for a month of Halloween festivities each October. The Haunted Happenings Grand Parade is a fun, sociable event appropriate for people of all ages, whereas the relatively new Zombie Walk can look a little creepy and gross (as is appropriate, in turn, for zombie appreciation). Halloween weekend is when Salem really shines, though, with a full slate of events: The Dumb Supper at the Hawthorne Hotel, for example, honors those persecuted by the Salem Witch Trials, while Eerie Evenings at The Witch House offers scary performances in an authentic setting. The Official Salem Witches’ Halloween Ball, also at the Hawthorne Hotel, and Spirits of the Gables at The House of Seven Gables, are highlights as well. hauntedhappenings.org

The organizers behind Shocktoberfest bill it as a “haunted theme park,” though it’s only open for a short time. There are six spooky attractions here: Biohazard Hayride, Monster Midway, Prison of the Dead, SawKill, Toxic Asylum Haunted Hospital, and Warehouse of Horrors. The two most popular are probably the Toxic Asylum Haunted Hospital and the Warehouse of Horrors. They’re all appropriately frightening though, and the universally-recognizable sounds of kids shrieking in delighted terror permeate the grounds. Shocktoberfest is open weekend nights – including Thursdays as Halloween nears through November 1. shocktoberfest.com

This amusement park on Lake Erie has gently scary activities for families with young kids during the weekends leading up to Halloween. Daytime sights and activities include the Monster Midway Invasion Celebration Parade (not overwhelming frightening), and The Magical House on Boo Hill, which is basically a fun house for small children. But older kids and teens can get their socks scared off at Cedar Point too. CarnEvil, Fear Faire, and Fright Zone should take care of that “let’s get scared” jones teenagers get around Halloween. While they walk through the fog and strobe light effects, creepy “Screamsters” jump out unexpectedly, rattling chains and yelling. Yes, it’s scary, and yes, it’s only recommended for kids older than 8 (conservatively). Halloweekends is open weekend nights right up to Halloween. halloweekends.com

Jennifer Miner is a professional travel writer who writes with her friends and fellow travel writers at thevacationgals.com. She also the Feature Writer of the weekly luxury travel column at Suite101.com.