By Jennifer Miner
The Vacation Gals 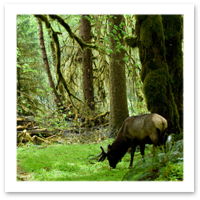 The US National Parks are always popular travel destinations, and with Americans feeling the budget squeeze, expect to see more families than usual at the top National Parks (our favorites for kids and families are here). For travelers who want to vacation in a National Park that’s less crowded, but with gorgeous, memory-making vistas and experiences, I recommend a week in Washington State’s Olympic Peninsula.

Why the Olympic Peninsula? There are two good reasons. First and foremost is the relatively under-the-radar Olympic National Park. Second, Forks, star of Stephanie Meyers’ Twilight Series, is right around the corner. But more on that in a minute.

First, let’s consider some of the highlights of the Pacific Northwest’s Olympic National Park.

In the western part of the park, Quinault gets more rain than anywhere else in the mainland United States, so bring a raincoat. We’re talking 12-14 feet every year! Summers are the driest time of the year, but expect some precipitation regardless. All that rain makes for some of the lushest, greenest habitat in the States.

Don’t Miss: The largest Sitka Spruce tree in the world is here, along with many other old, majestic, and thoroughly moss-covered trees. A new local feature is the Waterfall Trail, for serious and experienced hikers only.

Where to Stay: The Lake Quinalt Lodge is a stately, historic lodge (circa 1926) in the National Park. It’s right on Lake Quinault, so families can rent paddleboats and kayaks and enjoy some time on the water.

Another old-growth, temperate rainforest in the western part of the park is the Hoh Rain Forest. You can follow the Hoh River all the way from Mount Olympus to the Pacific Ocean.

Don’t Miss: Fishing, rafting or kayaking along the Hoh River. The outdoorsy local guides at RainForestPaddlers.com have a terrific guided kayak and raft rental service. There’s a minimum age for different water sports, though, so check with them before bringing the family.

Where to Stay: The Sol Duc Hot Springs Resort, complete with natural (and sulfurous) hot springs. Great hiking trails abound, and the hotel’s restaurant – Springs Restaurant, of course – does wonders with salmon and other fresh seafood.

It’s the highest peak in Olympic National Park, and iconic to the region. I’ve gotta mention it, of course, but at 7,829 feet with steep crests and deep valleys, it’s NOT easy to climb. It’s heavily glaciated, with lots of snowfall, and it takes a day’s hike just to reach its base. If you want to give it a try, mid- to late summer is the time to go.

Though not literally in the Olympic National Park, Port Townsend is a charming, lovely old maritime center that it shouldn’t be missed. And hey – it IS a US National Historic Landmark District. One look and it’s easy to see why. It became an important seaport in 1792, and many Victorian buildings are still standing. The stores vary from rustic to modern inside, with shopping opportunities galore.

Don’t Miss: The art scene. Seriously! For a small, quiet Victorian-era seaport, Port Townsend has a film festival and surprising number of art galleries. The galleries on Water Steet, Port Townsends’s main thoroughfare, display and sell local art ranging from jewelry and woodcrafts to sophisticated representations of scenes around the Olympic Peninsula.

Where to Stay: Family groups can stay affordably at decommissioned Fort Worden, and take a peek at the Commanding Officer’s Quarters Museum. Or stay right on Water Street, at the Water Street Hotel; the rooms are surprisingly large for Victorian-style lodging.

Well, those adolescent girls have been biding their time, and yes, the 5th thing not to miss in the Olympic National Park is the little town of Forks. Forks, as they’ll tell you, is where the Twilight series takes place, and it’s sure to be a boon to the local economy.

Don’t Miss: Entrepreneur Annette Root has opened up a store and tour, Dazzled by Twilight. The store contains every kind of Twilight paraphernalia imaginable, and judging by a midweek visit, business is booming. Girls—and okay, some boys, and plenty of adult women too—can’t get enough of Team Edward and Team Jacob t-shirts. The tour guide, Travis, used to run tours in Hollywood; his friendly banter belies his skill and professionalism. He takes participants through Forks and La Push, with stops at Forks High School, Bella’s house, the Cullen House and Jacob’s House, and First Beach.

Where to Stay: Kalaloch Lodge, by the ocean in Olympic National Park, is the best place to overnight in Forks as well.

Jennifer Miner is a professional travel writer who writes with her friends and fellow travel writers at The Vacation Gals. She also the Feature Writer of the weekly luxury travel column at Suite101.com.