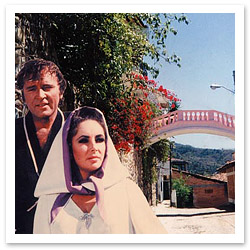 Puerto Vallarta was just a sleepy fishing village when Richard Burton arrived in 1963 to film Night of the Iguana with Deborah Kerr and the bibulous Ava Gardner. The threesome’s combined star power was enough to spark international interest, but when Burton’s mistress Elizabeth Taylor joined the fray, the paparazzi really got an eyeful.

The attention did little to dampen the couple’s ardor for each other or their surroundings. In fact, Burton was so besotted with the spot that he purchased a love nest there that he gifted to Taylor on her 32nd birthday. Casa Kimberley, two connecting villas on a steep cobbled lane, would serve as the pair’s private hide-away until their second divorce more than a decade later.

Today, Casa Kimberley is a thriving B&B and a haven for hopeless romantics. The side where Burton was relegated during his drinking binges has three pool-view guestrooms. Crossing the “love bridge” to Taylor’s quarters you’ll find five more, including Liz’s former penthouse, the “Cleopatra Suite.”

Guests are free to browse through revealing scrapbooks, shoot some pool on the couple’s billiard table, or down a few drinks at an alter-like bar that the Bacchanalian Burton designed himself. Bed and breakfast rates start at $75 per room. Tours are offered Monday through Saturday for $8 per person. (photo, top) 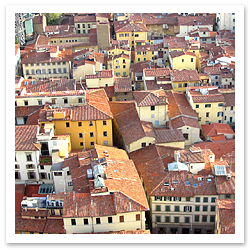 Tongues wagged when 40-year-old poet Elizabeth Barrett rose from her sick bed and ran off with Robert Browning in 1846. The pair ultimately settled in Italy, where they rented a spacious apartment on the main floor of Palazzo Guidi, near Florence’s fabled Ponte Vecchio.

The place remains a literary shrine, thanks to the combined effort of the Browning Institute, Eton College, and Britain’s Landmark Trust, an organization which now rents the apartment to fund further preservation projects.

Working from 19th-century letters and a painting Robert commissioned shortly before departing, the proprietors faithfully recreated Casa Guidi’s four main rooms, including the salon where Elizabeth wrote and where fellow authors Tennyson and Hawthorne were entertained. Even Robert’s former desk and the gilt-framed mirror he alluded to in The Ring and the Book have been returned to their original positions.

An ample supply of books and eclectic art create the illusion of another age, but a modernized kitchen and bathrooms are welcome nods to the present day. Casa Guidi will set you back $290 per night based on a one-week rental. Part of the apartment is open for public tour for a few hours on Monday, Wednesday, and Friday between April and November. There is no admission charge, but donations are welcome. Log on to www.landmarktrust.org.uk or call the Trust’s U.S. office at 802/254-6868 for details. 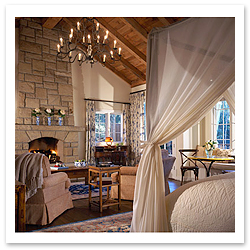 This lovely spread in the Montecito foothills near Santa Barbara, California, has been a retreat for Hollywood couples ever since Oscar-winner Ronald Coleman bought it in the 1930s. Vivian Leigh and Laurence Olivier chose it as the site for their midnight marriage, and Gwyneth Paltrow, Julia Roberts, and Jennifer Lopez have all spent time here.

The ranch’s most celebrated guests, though, were John F. Kennedy and Jacqueline Bouvier Kennedy. In 1953, seven years before JFK and his bride moved up to the White House, they bedded down in an early 20th-century cottage hidden among oak trees and bougainvillea.

Today their presence is clearly felt: the guest register signed by JFK has been preserved, the homemade cream puffs the couple requested during their visit are still served, and the welcome mat is kept out.

With two bedrooms, two bathrooms, and one super-sized deck, their cottage is suitably grand. Nonetheless, it has that air of outdoorsy elegance that was best embodied by the Kennedys themselves. The fireplaces, for instance, are made of fieldstone and beds are topped with cozy goose-down comforters. The cottage is currently being restored and is slated to accept guests again in January 2007 for the princely sum of $2,990 a night.

In the meantime, you can always book one of 39 other rooms or suites (starting at $795 per night), available in bungalows scattered around the 500-acre property. Like the Kennedy digs, all are tastefully outfitted and have up-to-date amenities (such as DVD players and high-speed internet access). Contact San Ysidro Ranch for reservations. 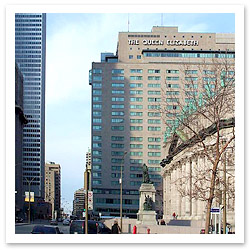 Newlyweds John Lennon and Yoko Ono put Montréal’s Fairmont Queen Elizabeth Hotel on the musical map when they arrived on May 26, 1969 for a weeklong Bed-In.

The Lennons weren’t exactly alone. Droves of reporters were in tow to chronicle the goings-on that culminated on June 1 with the writing and recording of “Give Peace a Chance” in the hotel suite. John and Yoko checked out the next day, but in the years that followed Nelson Mandela, the Dalai Lama, Mikhail Gorbachev, and Jimmy Carter all checked in.

Set the tone for a romantic escape by reserving #1742, the suite that actually served as center stage. It’s been refurbished with a classic-contemporary feel and earthy color scheme, but we’re sure the Lennons would approve. What hasn’t changed is all the Bed-In memorabilia — vintage photos, press clippings, and gold records of the peacenik anthem. If you’re overnighting on December 8, you may also find roses at the door: each year, two-dozen are left there anonymously on the anniversary of John’s death.

The Queen Elizabeth offers a one-night John & Yoko Getaway Package, complete with breakfast in bed, in their fabled suite priced at $535 per couple. Too much? You can also book #1740, a standard-size, adjoining room the Lennons used, starting at $178. 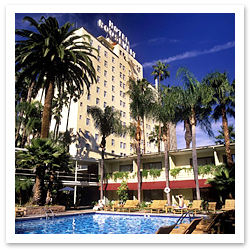 For film buffs there’s nothing quite like the historic Roosevelt Hotel in Los Angeles. Opened in 1927, it quickly became Mecca for Tinseltown’s first celebs. Don’t be surprised if you bump into the shades of Clark Gable, Carole Lombard or Marilyn Monroe in the lobby. All three actors pent a lot of time at the hotel, especially Marilyn. You can stay in the suite she loved most — an 850-square-foot spread overlooking the pool. It’s a very sexy space, complete with white leather wall and matching couch, hardwood floors and wrap-a-round terrace. True romantics can book the $7,000 Gable/Lombard Suite. The penthouse was made famous when the duo met here for their secret love trysts. The space, recently renovated, boasts a dining room for 12, three bedrooms, and a tub large enough for two people to soak in while watching a film on the enormous flat screen TV located in the master bedroom.