News Tina Antwi 'Regenerative Travel' Is the New Buzz Phrase, but What Does It Mean?
Home  >  News   >   5 Best Places in America to Drink American Beer 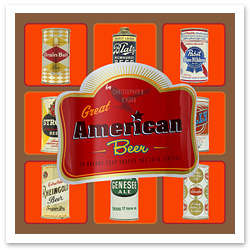 Planning a cross-country trek of the U.S? You’ll be happy to know there’s no shortage of great places where you can stop to sip some suds. Here are five of the best, according to Christopher O’Hara, Author of Clarkson Potter’s new book, Great American Beer: 50 Brands that Shaped the 20th Century.

Founded in 1978, this Austin institution features America’s tastiest ribs, and that’s coming from a man so obsessed with eating them that I wrote a book about it (Ribs: A Connoisseur’s Guide to Barbecuing). Order yourself up a pile of baby backs and slurp down three or four classic Shiner beers and you’ll be simultaneously in beer and hog heaven.

Low down and dirty, the Blue & Gold is all about the beer. For me, it’s all about seeing how many delicious Ballantine’s you can put down and how long the Ukrainian bar maid will continue to serve you. Hint: when you cannot decipher the images on the clever rebus puzzles on the inside of the Ballantine’s caps, it’s time to close your tab and move on to another joint.

For the itinerant beer lover, a trip to St Mary’s, Pennsylvania has the childlike appeal on par with winning the “Golden Ticket” to Willy Wonka’s Chocolate Factory — only there, instead of finding the Everlasting Gobstopper, you will find the “Eternal Tap,” where drinkers 21 and older can sample what seems like an infinite amount of ice-cold, delicious Straub beer.

According to legendary LA sophisticate and barhopper extraordinaire, Lauren Jaeger, the place to quaff tasty and delicious American beers away from the red carpet is St. Nick’s Pub, which serves a variety of classic American and imported brews. According to Jaeger, “If you are a post-college 20-something hipster with a taste that runs more towards mozzarella stocks and Budweiser than caviar and Cristal, then this is your place. Plus, the men are hot.”

Since their unofficial slogan is “come for the beer, stay for the cheaper beer,” you probably know what to expect from this classic Milwaukee dive bar. Every unimaginably cheap American beer is featured, so take your choice from Busch to a trendy can of $1.50 PBR. If you have enough change leftover, take a stroll through a reasonably decent and eclectic jukebox — and let the good, cheap times roll.

Sampling the Suds in Belgium
Bottoms Up in the Big City