Summer is the best and brightest season to explore Canada’s vast expanses by car. Slush has melted off the highways and byways (well, most of them), temperatures average a breezy 74 degrees, wildflowers bloom, and the snowy peaks glimmer in the midday sun. Touching each point on Canada’s compass—the Arctic Circle down to the 49th Parallel, and the Pacific to the Atlantic—we’ve assembled four great Canadian road trips stretching over the second largest country in the world. Happy trails. 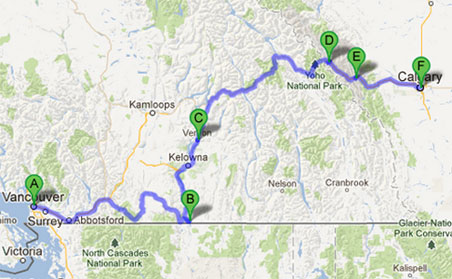 Break up this 700-mile journey into tanks of gas, and linger along the way. Spend a few days in cosmopolitan Vancouver eating seafood and seafaring on the Pacific. Drive five hours to meet up with your first stop in British Columbia’s Okanagan, and overnight at a winery (we suggest The Villas at Hester Creek or a room at Burrowing Owl)—think of it like a stay with benefits.

The next evening, sojourn at Sparkling Hill (a Fodor’s 100 Hotel Award winner in 2012), a glitzy retreat built by the Swarovski Crystal family. Not surprisingly, crystals dangle from every angle in the contemporary, glass-encased space.

Your journey into Banff will show off the greatest change in landscape, as you traverse between Canada’s only desert to its high-flying rocky peaks. Once in the mountains, picnic at one of Canada’s most photogenic locations, Lake Louise, and make your way into Banff to rest at the historic Fairmont Banff Springs Hotel, known around the world as the “castle in the Rockies” for its iconic vistas. 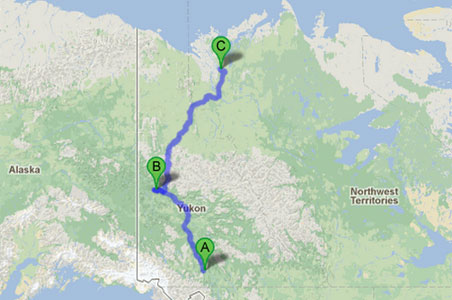 There’s a line in Canada’s national anthem that says “true North strong and free,” so we thought it would be apropos to send you way North to get a grasp of the country’s far reaches. Your arctic adventure begins in Whitehorse, the capital of the Yukon—one of three Northern Territories—and moves straight up to Inuvik, in the Northwest Territories.

Start in Whitehorse, and siesta in Dawson City, once the centre of the Klondike Gold Rush. From here, cruise toward Inuvik, a town so high, its situated beyond the Arctic Circle between treeless tundra and the northern boreal forest!

Insider Tip: You’re so far North in each of these far-flung pit-stops that the summer sun shines 24/7 (bring your sleep mask!). 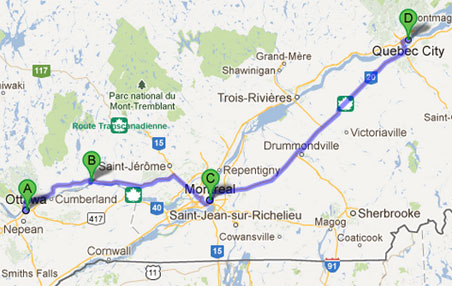 This French Canadian crawl is the shortest and most urban four-wheel trip, taking you from Canada’s capital, past one of its largest cities, and into the cobblestone streets of Quebec City. Spend a few days in Ottawa brushing up on your canadiana, then drive two hours past roadside poutine stands and pop into the Fairmont Montebello, the largest log cabin in the world. Just over an hour beyond this pastoral setting, take some time to eat your way through a few of Montreal’s 5600+ restaurants. Once you arrive in Quebec City, toast your trip’s finish on the banks of the Saint Lawrence River beside the most photographed hotel in the world, the Fairmont Chateau Frontenac. 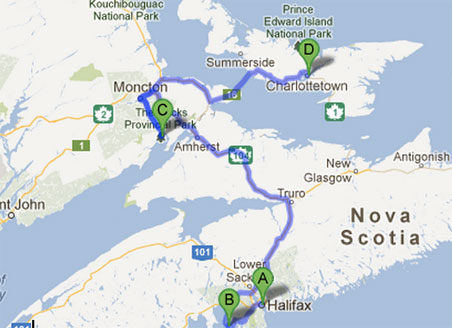 Venture into Canada’s Maritime provinces for vastly different vistas than you’ll find anywhere else in the country; think wispy grasses, red sand beaches, and painted seaside communities. Spend a night in Halifax and tour Alexander Keith’s, one of North America’s oldest commercial breweries, then zip over to Peggy’s Cove and wander along the blue- and red-hulled fishing boats bobbing beside seaside homes at the tip of St. Margaret’s Bay.

Drive across Nova Scotia to New Brunswick to behold the intense tidal flow (100 billion tons of seawater flows in and out) at Hopewell Rocks on the Bay of Fundy, and finish your trip in Prince Edward Island by advancing over the Confederation Bridge, an 8-mile engineering feat built with a curve so drivers pay attention. Once in Charlottetown, stay awhile and putter around the petite isle spotting its 30+ primary-colored lighthouses. As a grand finale, mark your Maritime road trip by feasting on the Atlantic’s fresh catch at Lot30 restaurant.