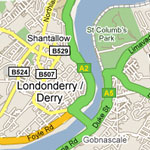 Every Halloween the entire populace of Derry—the second-largest city in Northern Ireland—turns out in wild homemade costumes, and pubs have been known to refuse a drink to anyone who hasn’t made the effort to dress up. The weekend-long festival is well attended; upwards of 40,000 revelers are expected to attend the weekend-long festival, which is punctuated by a firework display on Halloween night (October 31st). “Scary Derry” bus tours, family-friendly events at local museums (including the already spooky Workhouse Museum), and a carnival parade are some of the weekend’s other highlights.

Halloween enthusiasts who want to celebrate the holiday where it all began.

Be original and daring with your costume choice! Of course, if you’re hoping to buy or rent a costume once in Derry, you’ll want to ask locals for their favorite “fancy dress” shop.

There are daily flights on Ryanair from London’s Stansted and Luton Airports to the City of Derry Airport (LDY). Aer Arann offers direct flights to Derry from Dublin. Coming over just for the festivities? Continental Airlines offers direct flights from Newark, N.J. to Belfast International Airport (BFS), which is 75 minutes from Derry. There are several daily buses available between Dublin and Derry; the journey takes 4 hours.

Other Things to Do While You’re There

Where to Eat
Badgers – The local watering hole for local media types, artists, writers and musicians
Thompsons on the River – Great views of the river

Where to Stay
The Merchant’s House – Graceful and elegant, this inn offers great value considering everything that’s on offer
Tower Hotel – The only hotel within Derry city’s historic walls

We recently asked our friends on Twitter where they’d like to celebrate Halloween if they could go anywhere in the world. Their recommendations included New Orleans, Salem, and Montreal among others.