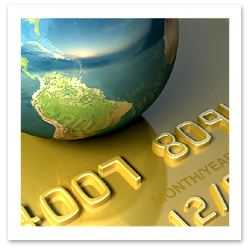 Inspect the fine print on your credit and bank card before your next trip–each swipe could be costing you more than it should.

Although you may not know it, many major credit cards tack a 3% currency conversion fee for all foreign charges. This fee generally includes a 1% fee levied by Visa or MasterCard; your card company passes the charge on to you. That’s not small change when you consider all of the hotel stays, meals, souvenirs, and museum entrance fees you will charge on that sucker.

Best of the Bunch: Capital One
Capital One continues its popular policy of charging zero conversion fees. They even absorb the 1% fee that Visa and MasterCard charge to process purchases.

Honorable Mention: American Express
American Express, which charges a flat 2% fee, deserves special mention for its refusal to allow merchants to tack on additional fees at the point of sale, namely the Dynamic Currency Conversion fee (DCC). When you charge something abroad, you may be asked if you’d like to be charged for the amount of your bill in your home currency. The result, a seemingly tidy sum in your local currency, carries with it additional charges averaging 3-5% of the total purchase. Coupled with a credit card that charges 3% currency conversion fees, that purchase could cost over 8% more than its retail price. Always say no to these offers and always check that your bill is in the local currency — some retailers will make the conversion without asking you first.

By charging with an AMEX card, you are completely avoiding the DCC altogether, which is just one less thing to worry about. If you’re unsure if AMEX will be accepted where you’re heading, Visa and MasterCard cards issued by Wachovia and HSBC only carry the 1% fee, but they’re still susceptible to DCC charges.

Guilty as Charged: The 3% Cards
Several card companies pad their pockets with every international purchase you make. Be forewarned–you’ll pay 3% currency conversion fees with the following companies: Chase, Bank of America, Citibank, and Wells Fargo.

In the 21st century, debit cards reign supreme as the most convenient means of procuring local currency at a favorable rate. It’s a godsend to be able to skip the airport exchange desk to make a bee-line for a cash machine — as long as you know what sort of fees to expect with every withdrawal. Some debit cards, like their credit card counterparts, tack a 3% currency conversion fee plus a fee if you use the card at a machine that is not affiliated with your home bank. Finally, users may also be charged for withdrawing money by the owner of the machine.

Best of the Bunch: HSBC
If you’ve traveled internationally in the last year, chances are you’ve glimpsed the company’s ads dubbing it “the World’s Local Bank” on terminal walls. For globetrotting travelers, there’s peace of mind in knowing that there’s likely an HSBC relatively close should something with your account go awry. There are currently 160,000 ATMS and 9,700 branches worldwide. For debit purchases and withdrawals, HSBC currently charges only Visa and MasterCard’s 1% fee. Withdrawals from a non-HSBC incur a $1.50 surcharge.

Honorable Mention: Washington Mutual, Wachovia, Smaller Regional Banks, Your Local Credit Union.
Both Wachovia and Washington Mutual only charge the 1% fee; both charge withdrawal fees. You don’t necessarily have to do business with big banks–you might find that your local bank or credit union offers the best deal. USAA also offers competitive rates for members of the military and their families.

If you spend more time in airport lounges than your own living room, chances are you’ll be logging enough miles and trips to make carrying a rewards card seem like a no-brainer. There’s a dizzying array of options; you may be surprised to find that some hotel-based cards offer greater flexibility and value than many airline frequent flyer cards. Keep in mind that participation in many rewards programs and clubs, including those mentioned below, do not require that you sign-up for the connected credit card. The cards are a means to accumulate points at a faster rate.

Best of the Bunch: Starwood Preferred Guest American Express Card
For 19 years, InsideFlyer magazine has sponsored the Freddie Awards, an annual review of the travel industry’s best rewards-based programs as voted by frequent travelers. The Starwood Preferred Guest program consistently receives top honors. Holders accumulate “Starpoints” with every dollar they spend on the card; the points can then be cashed in for free stays and upgrades at Starwood hotels or transferred for tickets on over 30 airlines.

Honorable Mention: Priority Club Rewards Platinum Visa Card
Voted the program of the year for the Americas by the Freddies in 2005, the rewards program of the IGH Hotel group snapped Starwood’s long-running spot at the top. Points can be earned and redeemed for hotel stays at IGH Hotels, which include the Holiday Inn and InterContinental chains, and tickets on 11 airline partners, among other rewards.

Guilty as Charged: You — Carrying a Big Balance on a High APR Rewards Card
The points you rack up lose their value quickly if you consider the increased debt you’re taking on if the card is not paid off every month. These cards carry higher APR’s (Annual Percentage Rates) starting around 18% and annual fees averaging from $30-$80 a year. If you regularly finance your day-to-day expenses with credit cards, there’s a good chance that you could better serve your vacation piggy-bank if you switched to a non-rewards card with a lower APR.

Editor’s Note: The value of these cards is largely dependent on your needs as a traveler and your spending habits. All rates mentioned above are for U.S.-based accounts — rates vary by country. All rates were confirmed at the time of writing but rates change often — always call to confirm.