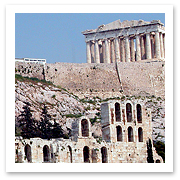 7.30 a.m. Watch the sun rise over the city while strolling (or jogging) on the tree-lined track behind the Athens Marble Stadium (Vasileos Konstantinou Boulevard and Vasilissis Olga Street), where the Olympics were revived in 1896. On adjacent Ardittos Hill, look for the unmarked rock base of the little-known Temple of Luck, built in the 2nd century AD by Athenian benefactor Herodes Atticus.

9 a.m. Next, put in some face time with eternity nearby at the Temple of Olympian Zeus, which took 700 years to build. Fifteen of the temple’s enormous original columns are still standing. There would be 16, but an 1852 wind storm knocked out one of the columns, which is still lying where it fell. If you don’t have much time, you can admire the temple from outside the fence, near the intersection of Vasilissis Olga Street and Vasilissis Amalias Avenue. You can also see Hadrian’s Arch from there, a stunning marble gateway built in AD 131.

10 a.m. Ascend to the Acropolis via peaceful Dionyssiou Areopagitou Street. Do take time to inspect the archaeological wonders on display in glass cases in the shiny new subway system’s Acropolis stop (near the bottom of the street). Then head to the Acropolis (photo, top), passing ritzy residences and the sleek New Acropolis Museum’s construction site. After you’ve spent some time at Athens’ most famous tourist stop, explore Plaka’s winding streets, stopping at the Melina Mercouri Café (22 Lyceou Street), dedicated to the immortal Never on Sunday actress.

Noon: Roll up your sleeves and visit the Athinas Street central food market, bounded on three sides by Sofokleous, Athinas, and Aiolou Streets. Get a taste of local color at the rowdy meat and fish markets, then cross the street for fresh fruit. At the Lesvos Shop (33 Athinas Street), an entire wall is dedicated to ouzo (go ahead, live dangerously). Buy oregano and Greek mountain tea at the teeny 40 Athinas Street spice shop.

1 p.m. What’s a frappé? Test the powerful coffee favored by chic Hellenes at one of posh Kolonaki Square’s perpetually humming cafés. Or grab lunch at the nearby Museum of Cycladic Art’s atrium café (4 Neophytou Douka) before contemplating the collection’s enigmatic stone figures.

3 p.m. Pooped? Head back to your comfy room at Acropolis Select, where for only a few bucks more than you’d pay for a budget room you can stay in this slick hotel with great views of the Acropolis. 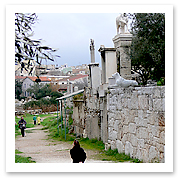 Ask for rooms 401-405 for the best views. Later, after your siesta, drop into the Zeus Bar for a refreshing pick-me-up.

5 p.m. Step back in time at Kerameikos cemetery (Ermou 148, pictured right), where ancient ruins rest near crumbling tombs. If you’re pressed for time, you can see it well enough from Ermou Street, near the Thission train station. For those with a little time on their hands, look for the terrace near the tombs. This is where Pericles gave his celebrated speech honoring those who died in the early years of the Peloponnesian War. (The cemetery is open till 7 p.m. May to October; it closes at 3 p.m. November-April.)

7 p.m. No Athenian in his or her right mind stays indoors on hot summer nights. Strofi (25 Rovertou Galli Street) is a great spot for al fresco dining, what with its grand view of the Acropolis. World-class performances under the stars are magical at the ancient Herodus Atticus Odeon and Lycabettus Hill theatre. (Info/tickets for the June/July performances are available at www.hellenicfestival.gr). 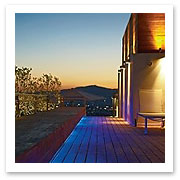 10.30 p.m. Order your mojito in the industrial-hip darkness of Inoteka (Avisynias Square) or in the relative coolness of Flower (2 Dorilaiou Street), a teeny, casual bar where drinks are served into the wee hours at tables in Mavili Square. If it’s chic you want, try a hotel bar. Dress up to chill out at the classic 13th floor Hilton Galaxy Bar (46 Vasilissis Sofias Avenue) or Fresh Hotel’s 9th floor Air Lounge rooftop bar (26 Sofokleous Street; photo, right).

1 a.m.-6 a.m. Hop into a cab and party till dawn at seaside bars with splashy names such as Island, in coastal Varkiza, about 27 km from Athens on the Athens-Sounio Road.