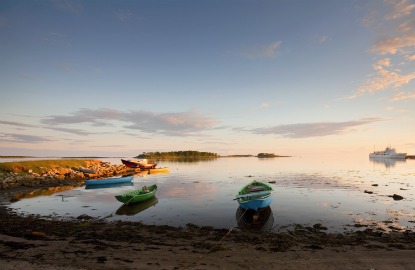 While Russian river cruising is proving more popular than ever before, adventurous cruisers craving exploration beyond the well-traveled Moscow–St. Petersburg route, can look to a duo of new itineraries set to debut in far-flung corners of the country’s vast expanses. Rarely traveled by cruise ships, these two expeditions explore unusual and remote Russian destinations surrounding the Sea of Okhotsk and the White Sea.

Upscale Hapag-Lloyd Cruises is launching its first foray into Russia‘s Far East in 2012, with a June 13 sailing date scheduled to circumnavigate the little-visited, wildlife-rich waters and islands of the Sea of Okhotsk (including Sakhalin, Russia’s largest island), along with stops in Kamchatka (Russia’s sparsely-inhabited easternmost province), and the Kuril Islands.

Book It: For more information visit the Hapag-Lloyd website.

Voyages Of Discovery Debuts a Nordic and White Sea Adventure

A rare cruise excursion into the White Sea region will embark on July 25, via Voyages of Discovery’s 650-guest Discovery. The 19-night voyage, sailing round-trip from Harwich, England, takes in stops in little-trodden ports of Norway and Russia, including an overnight stay in Russia’s Solovetsky Islands, set in the remote White Sea region.

For the Russian portion of the sailing, expect additional stops in Murmansk (the largest city set above the Arctic Circle) and history-rich Archangel. Onboard, expect history-themed lectures and insights courtesy of Sir Anthony Brenton, a British Foreign Office retiree, who is being featured as a special guest lecturer. Rates from $3,799/person.

Book It: To learn more, visit the Voyages of Discovery website.