It’s amazing how much you can see from your car. Whether you’re in Maine, where you can be at the top of Cadillac Mountain when the sun’s rays first hit the United States, or driving along the world’s highest continuously-paved highway in the Rocky Mountains, the incredible accessibility of the American wilderness will blow you away. Here are some of our favorite U.S. national park drives. 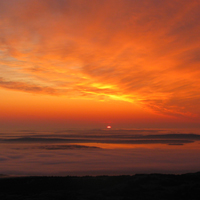 Cadillac Mountain. At 1,532 feet, this is one of the first places in the United States to see the sun’s rays at break of day. It is the highest mountain on the eastern seaboard north of Brazil. Dozens of visitors make the trek to see the sunrise or, for those less inclined to get up so early, sunset. From the smooth summit you have an awesome 360-degree view of the jagged coastline that runs around the island. A small gift shop and some restrooms are the only structures at the top. The road up the mountain is generally closed from the end of October through March because of snow.

Arches Main Park Road. Although they are not formally designated as such, the main park road and its two short spurs are scenic drives, and you can see much of the park from your car. The main road takes you through Courthouse Towers, where you can see Sheep Rock and the Three Gossips, then alongside the Great Wall, the Petrified Dunes and Balanced Rock. A drive to the Windows section takes you to attractions like Double Arch and you can see Skyline Arch along the roadside as you approach the campground. The road to Delicate Arch is not particularly scenic, but it allows you hiking access to one of the park’s main features. Allow about two hours to drive the 36-mi round-trip, more if you explore the spurs and their features and stop at viewpoints along the way.

Main Park Road. Following miles of canyon rim, this thoroughfare gives access to more than a dozen scenic overlooks between the park entrance and Rainbow Point. Allow two to three hours to travel the entire 36 mi round-trip. The road is open year-round, but may be closed temporarily after heavy snowfalls to allow for clearing. Major overlooks are rarely more than a few minutes’ walk from the parking areas, and many let you see more than 100 mi on clear days. Trailers are not allowed beyond Sunset Campground. Day users may park trailers at the visitor center or other designated sites; check with park staff for parking options. RVs can drive throughout the park, but vehicles longer than 25 feet are not allowed at Paria View.

Walnut Canyon Desert Drive. This scenic drive begins ½ mi from the visitor center. It travels 9½ mi along the top of a ridge to the edge of Rattlesnake Canyon and sinks back down through upper Walnut Canyon to the main entrance road. The back-country scenery on this one-way gravel loop is stunning; go late in the afternoon or early in the morning to enjoy the full spectrum of changing light and dancing colors. Along the way, you’ll be able to see Big Hill Seep’s trickling water, the tall, flowing ridges of the Guadalupe Mountain range, and maybe even some robust mule deer.

Rim Drive. The 33-mi loop around the lake is the main scenic route, affording views of the lake and its cliffs from every conceivable angle. The drive alone takes up to two hours; frequent stops at overlooks and short hikes can easily stretch this to a half day. Be aware that Rim Drive is typically closed due to heavy snowfall from mid-October to mid-June, and icy conditions can be encountered any month of the year, particularly in early morning. 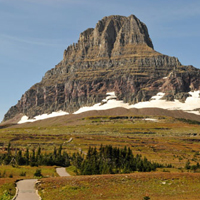 Going-to-the-Sun Road. This magnificent, 50-mi highway—the only American roadway designated both a National Historic Landmark and a National Civil Engineering Landmark—crosses the crest of the Continental Divide at Logan Pass and traverses the towering Garden Wall. Open from mid-June to mid-September, this is one of the most stunning drives in Glacier National Park. A multi-year Sun Road rehabilitation project will result in some driving delays due to reconstruction.

Signal Mountain Road. This exciting drive climbs Signal Mountain’s 1,040-foot prominence along a 4-mi stretch of switchbacks. As you travel through forest you can catch glimpses of Jackson Lake and Mt. Moran. At the top of the winding road you can park and follow the well-marked dirt path to be treated to one of the best panoramic views in the park. From 7,720 feet above sea level your gaze can sweep over all of Jackson Hole and the 40-mi Teton Range. The views are particularly dramatic at sunset. The road is not appropriate for long trailers and is closed in winter.

Cove Creek Road (Old Highway 284). This drive takes you to one of the most beautiful valleys in the Smokies, and to one of the most interesting destinations. The first 7 mi of Cove Creek Road is a mostly paved, winding two-lane road through a scenic rural valley. Entering the park, the road becomes gravel. As you near the Cataloochee Valley, suddenly you’re on a nice, paved road again. Follow the paved road, as it is a short cut to the historic old buildings of Cataloochee. (You can also continue on the unpaved Cove Creek Road toward Crosby, TN, and in about 5 mi you can enter Cataloochee from the back side.) Follow the signs for a driving tour of the old houses, barns, churches, a school, and other buildings that are all that remain of the once-thriving Cataloochee community, which at its peak in 1910 had about 1,200 residents. You can stop and walk through most of the buildings. Keep a lookout for elk, wild turkey, deer, and other wildlife here. If you haven’t had enough driving for the day, from Cataloochee you can continue on the unpaved Cove Creek Road to Big Creek campground near the North Carolina–Tennessee line, where you can reconnect with I–40 at Exit 451 on the Tennessee side.

Mowich Lake Road. In the northwest corner of the park, this 24-mi mountain road begins in Wilkeson and heads up the Rainier foothills to Mowich Lake, traversing beautiful mountain meadows along the way. Mowich Lake is a pleasant spot for a picnic.

North Cascades Highway. Also known as Highway 20, this classic scenic route first winds through the green pastures and woods of the upper Skagit Valley, the mountains looming in the distance. Beyond Concrete, a former cement-manufacturing town, the highway climbs into the mountains, passes the Ross and Diablo dams, and traverses Ross Lake National Recreation Area. Here several pullouts offer great views of the lake and the surrounding snow-capped peaks. From June to September, the meadows are covered with wildflowers, and from late September through October, the mountain slopes flame with fall foliage. The pinnacle point of this stretch is 5,477-foot-high Washington Pass: look east, to where the road descends quickly into a series of hairpin curves between Early Winters Creek and the Methow Valley. Remember, this section of the highway is closed from roughly November to April, depending on snowfall. From the Methow Valley, Highway 153 takes the scenic route along the Methow River’s apple, nectarine, and peach orchards to Pateros, on the Columbia River; from here, you can continue east to Grand Coulee or south to Lake Chelan.

Port Angeles Visitor Center to Hurricane Ridge. The premier scenic drive in Olympic National Park is a steep ribbon of curves, which climbs from thickly forested foothills and subalpine meadows into the upper stretches of pine-swathed peaks. At the top, the visitor center at Hurricane Ridge has some truly spectacular views over the heart of the peninsula and across the Strait of Juan de Fuca. (Backpackers note wryly that you have to hike a long way in other parts of the park to get the kinds of views you can drive to here.) Hurricane Ridge also has an uncommonly fine display of wildflowers in spring and summer. 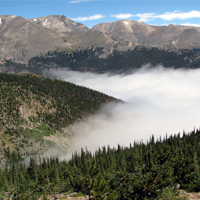 Trail Ridge Road. This is the park’s star attraction and the world’s highest continuous paved highway, topping out at 12,183 feet. The 48-mi road connects the park’s gateways of Estes Park and Grand Lake. The views around each bend—of moraines and glaciers, and craggy hills framing emerald meadows carpeted with columbine and Indian paintbrush—are truly awesome. As it passes through three ecosystems—montane, subalpine, and arctic tundra—the road climbs 4,300 feet in elevation. As you drive the road, take your time at the numerous turnouts to gaze over verdant valleys, brushed with yellowing aspen in fall, that slope between the glacier-etched granite peaks. Many Parks Curve affords views of the crest of the Continental Divide and of the Alluvial Fan, a huge gash a vicious flood created after an earthen dam broke in 1982. In normal traffic, it’s a two-hour drive across the park, but it’s best to give yourself three to four hours to allow for leisurely breaks at the overlooks. Note that the middle part of the road closes down again by mid-October, though you can still drive up about 10 mi from the west and 8 mi from the east.

Northeast Entrance Road and Lamar Valley. This 29-mi road features the richest diversity of landscape of the five entrance roads to Yellowstone. Just after you enter the park, you cut between 10,928-foot Abiathar Peak and the 10,404-foot Barronette Peak. You pass the extinct geothermal cone called Soda Butte as well as the two nicest campgrounds in the park, Pebble Creek and Slough Creek. Lamar Valley is the melancholy home to hundreds of bison, while the rugged peaks and ridges adjacent to it are home to some of the park’s most famous wolf packs (reintroduced in 1995). The main wolf-watching activities in the park occur here during early-morning and late-evening hours year-round. As you exit Lamar Valley, the road crosses the Yellowstone River before leading you to the rustic Roosevelt Lodge.

Tioga Road. Few mountain drives anywhere can compare visually with this 59-mi seasonal road, especially its eastern half between Lee Vining and Olmstead Point. As you climb 3,200 feet up to the 9,945-foot summit of Tioga Pass (Yosemite’s sole eastern entrance for automobiles), you’ll encounter broad vistas of the granite-splotched High Sierra and its craggy but hearty trees and shrubs. Past the bustling scene at Tuolumne Meadows, you’ll see picturesque Tenaya Lake and then Olmstead Point, where you’ll get your first peak at Half Dome. Driving Tioga Road one-way takes approximately 1½ hours. Wildflowers bloom here in July and August. By November, the high-altitude road will have closed for the winter; it sometimes doesn’t reopen again until as late as early June.

Kolob Canyons Road. From Interstate 15 you get no hint of the beauty that awaits you on this 5-mi road. Most visitors gasp audibly when they get their first glimpse of the red canyon walls that rise suddenly and spectacularly out of the earth. The scenic drive winds its way to a viewpoint that overlooks the whole Kolob region of Zion National Park. The shortest hike in this part of the park is the Middle Fork of Taylor Creek Trail, which is 2.7 mi one way to Double Arch Alcove, and gets fairly rugged toward the end. During heavy snowfall Kolob Canyons Road may be closed.