News Apeksha Bhateja Europe's Airports Are Chaos This Summer. And Now There's Another Problem
Home  >  News   >   15 Things We Love to Do in Chicago

15 Things We Love to Do in Chicago 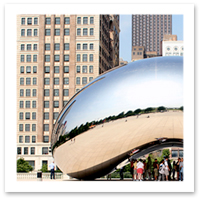 Chicago’s fabulous mix of slick skyscrapers, impeccably clean streets, lush parks, and a friendly Midwestern vibe all make this city beside Lake Michigan the perfect choice for that summer road trip you’ve been planning. But how to prioritize, and where to start? We’ll make it easy for you. Here are 15 things we love to do in Chicago.

1. Gaze at your reflection in the mirrored sides of Anish Kapoor’s giant “bean,” the centerpiece of Chicago’s Millennium Park. The sculpture looks a lot like some futuristic space-faring legume touching down in the middle of the Windy City. Make this your first landing place, too, and explore the waterfront paths and parks that are at the heart of the city.

2. Enjoy free fireworks down by the water. Wednesday and Saturday nights in summer, Navy Pier puts on a showy display of colorful explosives. Watch from the pier or along the waterfront opposite Buckingham fountain. Come early to take a ride on the Ferris Wheel.

3. Check out the clubhouse, dugouts, press box, and other historic places on the 90-minute Wrigley Field tour, or if you plan well in advance, see a Cubs game.

4. Eat at Moto, home of the wildly experimental and scientifically minded chef Homaru Cantu. When you get home, boast about ordering the prix-fixe menu, then eating the menu itself (it’s printed in edible ink on soy-based paper). 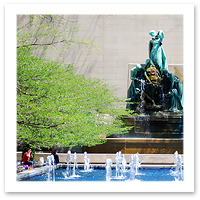 6. Take in a Monet or any one of the other works by the Old Masters and Impressionists at the Art Institute of Chicago. (photo, right)

7. Go shark-watching at John G. Shedd Aquarium, one of the world’s very best places to see all types of aquatic life under one roof.

8. Say hello to Sue, the Field Museum’s huge (and menacingly complete) T-Rex skeleton, then cruise the museum’s six acres of artifacts from various cultures and places around the world.

9. Eat a cinnamon bun at Ann Sather. You can get delicious brunches, too, for which lines are around the block, but the real reason to visit is the cinnamon buns. They’re justly famous throughout the city.

10. Go to the Skydeck at the top of Sears Tower, 103 stories up. On a clear day you can see four states: Illinois, Michigan, Wisconsin, and Indiana. To avoid crowds, consider visiting the John Hancock Center instead, where a drink at the bar on the 95th floor will keep you grounded.

11. Catch a show at Buddy Guy’s Legends, where local blues acts play every night of the week and larger-scale touring acts come through on the weekends. Die-hard blues fans should stop by the Blues Heaven Foundation, birthplace of Chicago blues, to see the original Chess Records offices and recording studio. There’s an eerie “Life Cast Portraits” wall in the shipping area that has plaster molds of some famous blues men’s faces. 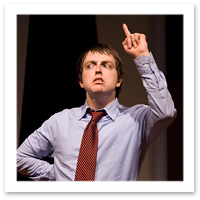 12. See the stage that launched John Belushi, Mike Myers, Bill Murray, and many more famous comedians into superstardom. The improv troupe Second City, founded in 1959, has a free set following the last performance every night but Friday.

13. Grab some of the best Mexican food in the city in Pilsen, then check out some of the up-and-coming galleries in this edgy hipster hangout.

14. Go shopping on the Magnificent Mile, a shopper’s shangri-la. Over 460 stores, from Hermés to Apple, compete for your attention. Even the chain stores make an extra effort in this larger-than-life atmosphere.

15. Spend the day living like a Chicago local. After you’ve seen Sears Tower and shopped the Magnificent Mile, rent a bike or rollerblades and attack the lake shore via 20 miles of bicycle paths that run north-south along the city’s edge. It’s a perfect way to enjoy the city’s awesome skyline outside of the hustle of downtown.