14 Things to Do in Paris with Kids

Paris is for lovers… and history fans, culture hounds, foodies, and shoppers of every ilk. Happily, Paris is also for kids. In fact, it has so much to offer travelers avec enfants that you could spend every family vacation here and still not cover it all. To simplify things, we’ve done the legwork for you by identifying a baker’s dozen of our favorite attractions. 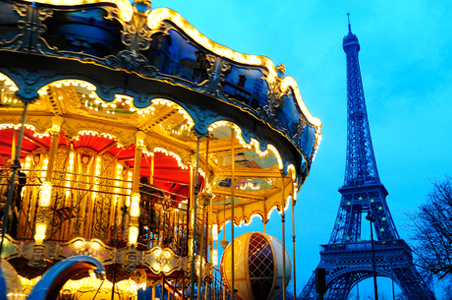 OK, let’s take it from the top. The first site on most lists is the Eiffel Tower. If your crew can brave potentially long lines without going into melt-down mode, take the elevator all the way up for the ultimate Instagram op. Otherwise look up at it instead of going up it. The best time to do this is after dark when the tour, festooned with 20,000 bulbs sparkles on the hour in a five-minute display, making the “City of Light” really live up to its nickname. Alternately, you can focus on another icon: the Arc de Triomphe. It’s free for anyone under 18 (by contrast, that elevator up the Eiffel Tower is €10 for ages 4-11, €13 for ages 12-24); plus it sits on the spot where Paris’ 12 main avenues converge, and the sight of the city laid out like a star below (a view which, of course, includes the Eiffel Tower) is magical.

More interested staying low than reaching high heights? Older kids (and, for that matter, parents) who aren’t claustrophobic or easily creeped out will love descending into the clammy Les Catacombes, a bastion of bones where the skeletal remains of some six million locals are neatly piled. Les Égouts (aka the Paris Sewers) offers a unique—and rather odoriferous—variation on the theme. Cue the Les Mis soundtrack as you explore the watery subterranean world deep beneath the Quai d’Orsay.

Be Amazed by Musées 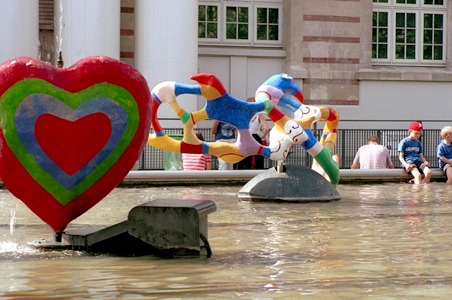 Museum hopping doesn’t always work on family vacations—after all, big entry fees are a deterrent when your travel companions have short attention spans. The good news here is that state-owned treasure troves are free for the under-18 set, and 16 municipal museums offer free entry for parents too. That means you can make appropriately brief forays without breaking the bank. Set the context for your trip by starting at Musée Carnavalet: occupying a pair of historic mansions, it re-tells the civic story and contains cool artifacts ranging from Neolithic canoes and model guillotines to royal toys and Napoléon’s cradle.

When it’s art you’re after, the Musée d’Orsay, with its renowned Impressionist and Post-Impressionist collection, is your best bet. The building itself (a Belle Époque train station) is intriguing, and the works (by Renoir, Van Gogh, Cézanne, and more) are the bold, bright variety kids prefer. The Pompidou Centre’s Musée National d’Art Moderne—which showcases Modern masters like Picasso, Chagall, and Matisse, and has a dedicated Galerie des Enfants (Children’s Gallery)—wins the runner-up prize. Even if you don’t actually enter, you can admire the eye-popping “inside out” architecture and ogle the funky Stravinsky Fountain (the area draws buskers, so you may be entertained by musicians, mimes, or fire-eaters as you watch the fountain’s mechanical components move). 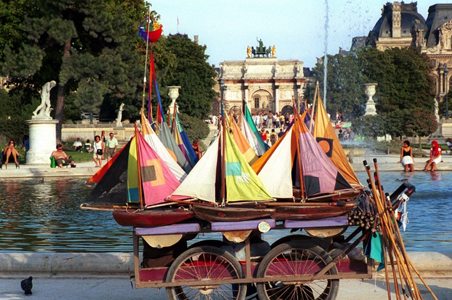 You can’t go to Paris without seeing The Louvre…or can you? Adults may feel compelled to dip into the museum, at least to see the Mona Lisa. But most young’uns would rather dip their fingers in the pretty pools just beyond it in the Jardin des Tuileries, the marvelous manicured garden that runs from the Louvre to Place de la Concorde. Don’t be put off by the pelouse interdite (keep off the grass) signs: there are lots of things for your offspring to do here, even if tearing up the turf isn’t one of them. While you take a bench break, they can clamber over très chic play equipment or, for a few euros, sample à la carte activities like riding carousel horses and, perhaps, real ponies. Best of all, in a scene straight out of a Ludwig Bemelman book, they can rent toy boats to sail in the pond.

Jardin du Luxembourg, across the Seine, promises many of the same retro delights; it also happens to be home to Paris’ premier guignol theater, Les Marionettes du Theatre du Luxembourg. Tickets are €4.70 and shows are in French—but that hardly matters since the language of puppet plays is universal. If lingering makes you feel lazy, remember that these parks (both beloved by Parisian families) offer a legit cultural experience, particularly on weekends and Wednesday afternoons when local kids are off school. 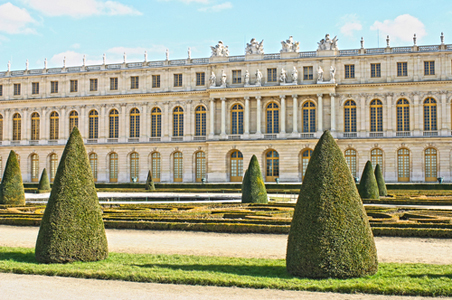 Although French royals weren’t the luckiest lot, they seem endlessly fascinating to us. So seeing at least one castle while you’re here is a must. The easiest choice is Chateau de Vincennes as it’s in Bois de Vincennes, just east of the city limits and accessible by métro; it’s arguably the most practical too, since a visit to this medieval masterpiece can be combined with other park attractions—among them, paddle boats, bike paths, a butterfly garden, even a working farm. But for the full royal experience, hit the road, Jacques. Option number one: famous Chateau de Versailles, 10 miles west of Paris.

It delivers over-the-top extravagance (picture the enormous Hall of Mirrors or Marie Antoinette’s lavish boudoir) as well as faux rustic retreats and acre upon acre of fabulous formal landscaping—all of which are free to visitors under 18. Chateau de Fontainebleau, 38 miles southeast of the city, counters with its own Grands Appartements and gorgeous grounds. A favorite of King François I and later Emperor Napoléon, Fontainebleau is again free for children—and complimentary kid-oriented booklets available onsite add treasure-hunt elements to the trip. If your brood has an entirely different type of castle in mind, don’t worry: you’ll find Le Chateau de la Belle au Bois Dormant—better known as Sleeping Beauty’s Castle—24 miles east of the city at Disneyland-Paris.

Frequent Fodor’s contributor Susan MacCallum-Whitcomb has taken her kids to 30-odd countries on six continents. When not on the road, they live happily in Halifax, Nova Scotia.