12 Travel Mistakes Not to Make 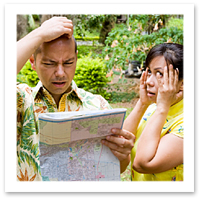 Travel mishaps can happen to even the most seasoned travelers. When one frustrated Fodor’s member recently vented about booking the wrong flights for an upcoming trip, several fellow Forums posters empathized by disclosing their own slip-ups. Here are a few of the do’s and don’ts that came out of this group confession.

From the Forums: What’s your biggest travel mistake?

Do look carefully at flight times and dates before booking

“I made our reservations for Peru, have been wanting to go all my life. Got a great deal on Delta, $808 per person round trip from D.C. Booked and paid. Then realized 3 days later that I had booked a return flight at midnight on Sunday morning instead of Monday morning. It was the midnight timing that got me confused. Called Delta, and cried profusely on the phone when I was told that the rate change means that each of us has to pay $500 to change the ticket.” — shared by emd

Tip: Sometimes even double and triple-checking travel dates will fail you. Be loyal to the airlines with inexpensive flight change policies and responsive customer service to alleviate your booking anxiety.

Do hold your tongue and check your flight’s seating chart

“I had asked for a window seat on a flight from Saigon to Paris, and was issued with boarding pass 9C. Realising “C” could not be a window seat, I took it back and had it changed. Too late, I realised I had previously been upgraded to business class, on a long, long flight, and had now successfully downgraded myself. The check-in lady had said not a word, either time, but it was my mistake for not realising. Too stupid for words!” — shared by Carrabella

From the Forums: What has been your best seat upgrade ever?

“Now, the most stupid travel mistake…not going to Europe even more often when the exchange rates were even better!” — shared by dukey

Tip: If the dollar is your home currency, you may wish to consider: Belize | Buenos Aires | Chiang Mai | Marrakesh

Don’t cancel the credit card tied to your reservations

“Canceled my credit card when I got mad about a rate increase, only to realize as we’re trying to check into a Paris hotel that doing so caused the hotel to cancel my reservation..” — shared by TravelNut

Tip: Make all flight, hotel, and car reservations with one single card to reduce the number of cards connected to your future travel plans. Be sure to print reservations in advance and make a note of the card you used to book them.

From the Forums: Isn’t there one great Paris hotel under $200?

“Long solo road trip for work with many tolls. I called my husband in frustration and told him that he better make sure I had the EZPass before I go on another trip again. He was very calm and told me that I did in fact have the EZPass. Yup. There it was…right behind my rear view mirror. I double paid—a lot.” — shared by reneeinva

From the Forums: Should I buy an EZPass?

“I made pre-cruise reservations very early last year knowing that the Miami Marathon was going on. Reserved in Fort Lauderdale using free points and thought we’d shuttle back to airport and take cruise shuttle to Miami pier. Somewhere in the 6 months that followed I forgot and we took a taxi to the Fort Lauderdale port. Imagine my surprise when the biggest cruise ship wasn’t there! It then hit me…oh yeah, it cruises out of Miami! It was an expensive taxi ride, but my husband knew better than to say anything…verbal or nonverbal (such as rolling eyes, etc). — shared by LLindaC

Tip: Don’t let a rocky start spoil your trip. Toast your agreeable travel partner when you are finally at sea or in the sky— at least you made it!

Do consider the season of your destination

“I took an around-the-world trip by myself when I finished all my schooling. I had been extremely busy and didn’t have time to thoroughly research the destinations. My biggest surprise was arriving in Sidney, Australia in August and not realizing it was their winter. I traveled extremely lightly and had the equivalent of a large gym bag of clothing. My solution to this was to wear ALL my clothes to stay warm. I looked like a bag lady when attending Evita one night at their beautiful Broadway style theatre.” — shared by ncounty

“Years ago I planned what I thought was to be a beach vacation for my non-traveling boyfriend and myself, but booked us into a downtown hotel in Santo Domingo, Dominican Republic (not having researched the lay of the land). Boy I laid on that bed and cried. Fortunately a kind bellhop told us “You need to go up to Puerto Plata instead” and somehow helped get us on a bus and to the other side of the island.” — shared by suze

Tip: Plug the address of your hotel into Google maps for a quick look at where it is in relation to the rest of your destination.

Do book a room for every night of your stay

“I do have to be careful when booking consecutive hotel stays. More than once, I’ve left us without accommodation because I’ve thought “ok, we’ll check out of this hotel on X and into that hotel on Y” not realizing that leaves us without a hotel room on the night of X.” — shared by goddesstogo

“Last year, on my way to Bangalore, India, I stopped in Paris and stayed at a nice room in the Tim Hotel in Montparnasse. I had reservations for a different hotel in the area for my return, but the Tim hotel’s location was so convenient for catching the Air France to the Airport, and besides, they agreed to keep an extra bag I would not need in India, that I decided to cancel my reservations at the other hotel. Big mistake. I thought they would charge me the same rate (an internet rate) of my previous stay, and did not check beforehand. Besides getting a lousy room, they overcharged close to 100 euros because there was a big sports competition in Paris that night (can’t remember what sport).” — shared by Brazilnut

Do update your driver’s license

“Not renewing my drivers license on time—seems that rental car agencies prefer to only rent their vehicles to legal drivers! It was 4 weeks after I had delivered my daughter…and that minor detail was the last thing on my mind…until I was rejected!” — shared by miller20621

Do carry a good map with you at all times

“Hopped on a bus in Honolulu convinced I knew where I was going. Ended up at a deserted strip of businesses in the dead of night on the other side of the island, where the driver told me ‘this is as far as I go’ and laughed himself silly when I told him where I was headed.” — shared by Melnq8

From the Forums:Is there any reason to bring a GPS device if we already have an iPhone?